The Zentralfriedhof (Central Cemetery, Zentral Friedhof) is one of the largest cemeteries in the world, largest by number of interred in Europe and most famous cemetery among Vienna’s nearly 50 cemeteries.The cemetery’s name is descriptive of its significance as Vienna’s biggest cemetery, not of its geographic location, as it is not situated in the city center of the Austrian capital, but on the outskirts, in the outer city district of Simmering.

There are 4 cemeteries (from left to right, east to west, along the Simmeringer Hauptstrasse):

Central cemetery. General situation. From Gates 4, 3, 2 and 1 you go in Southern direction. Take maps and a compass with you. Very stretched out. 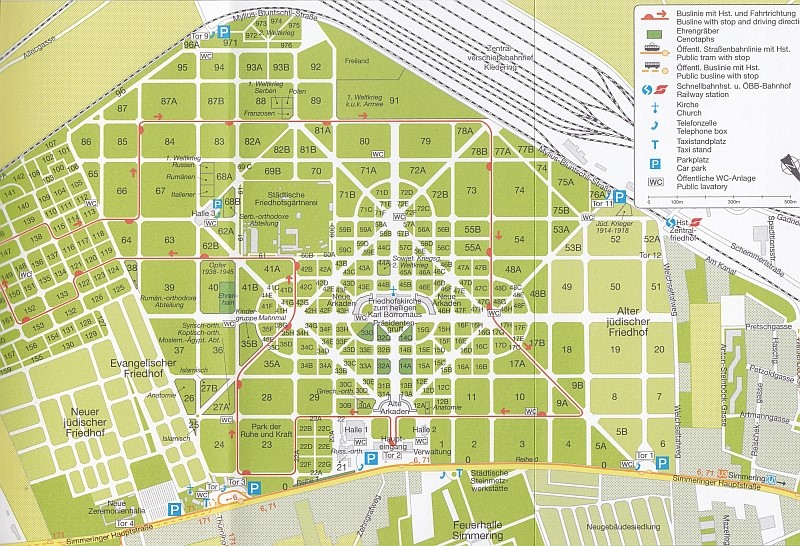 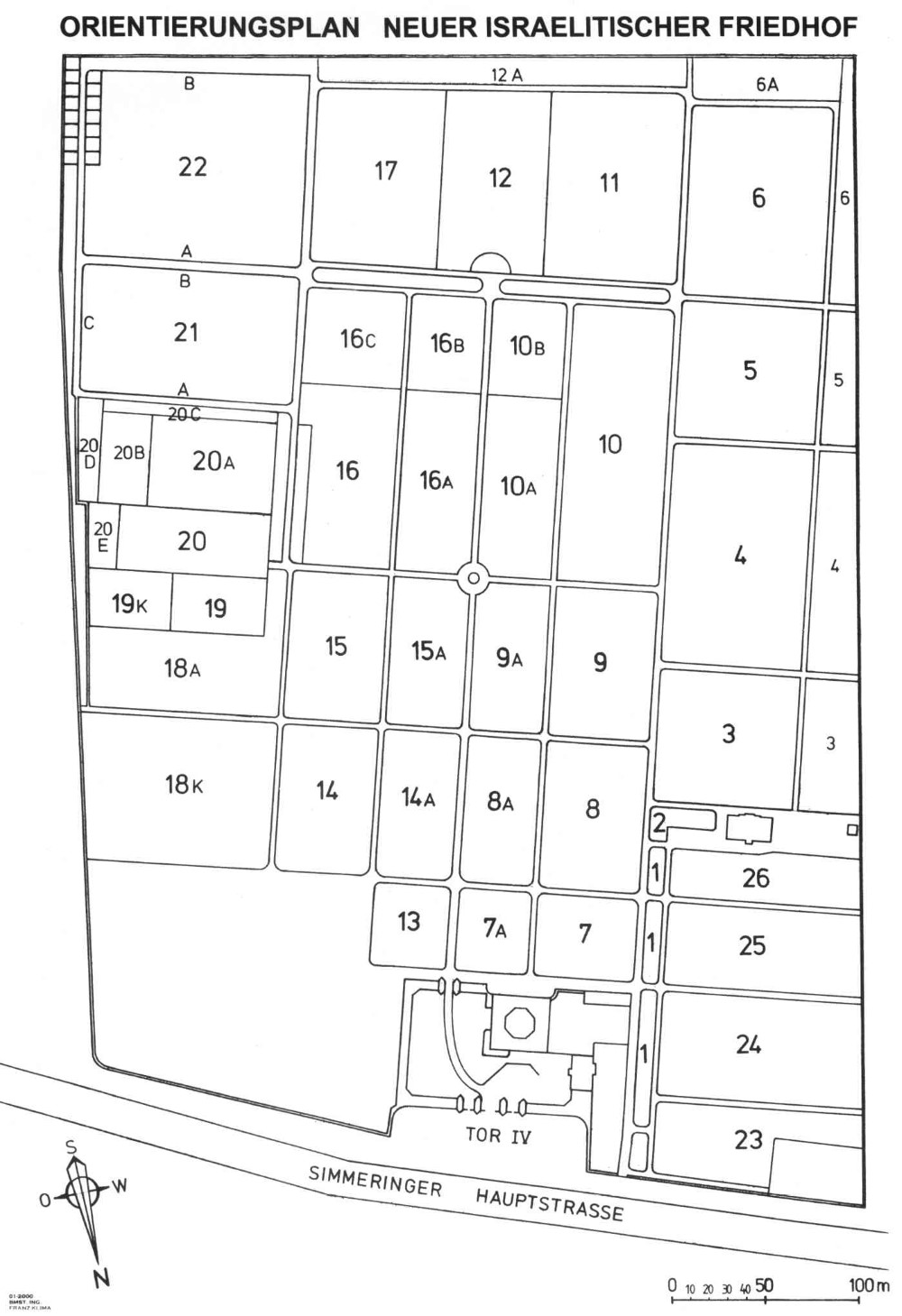 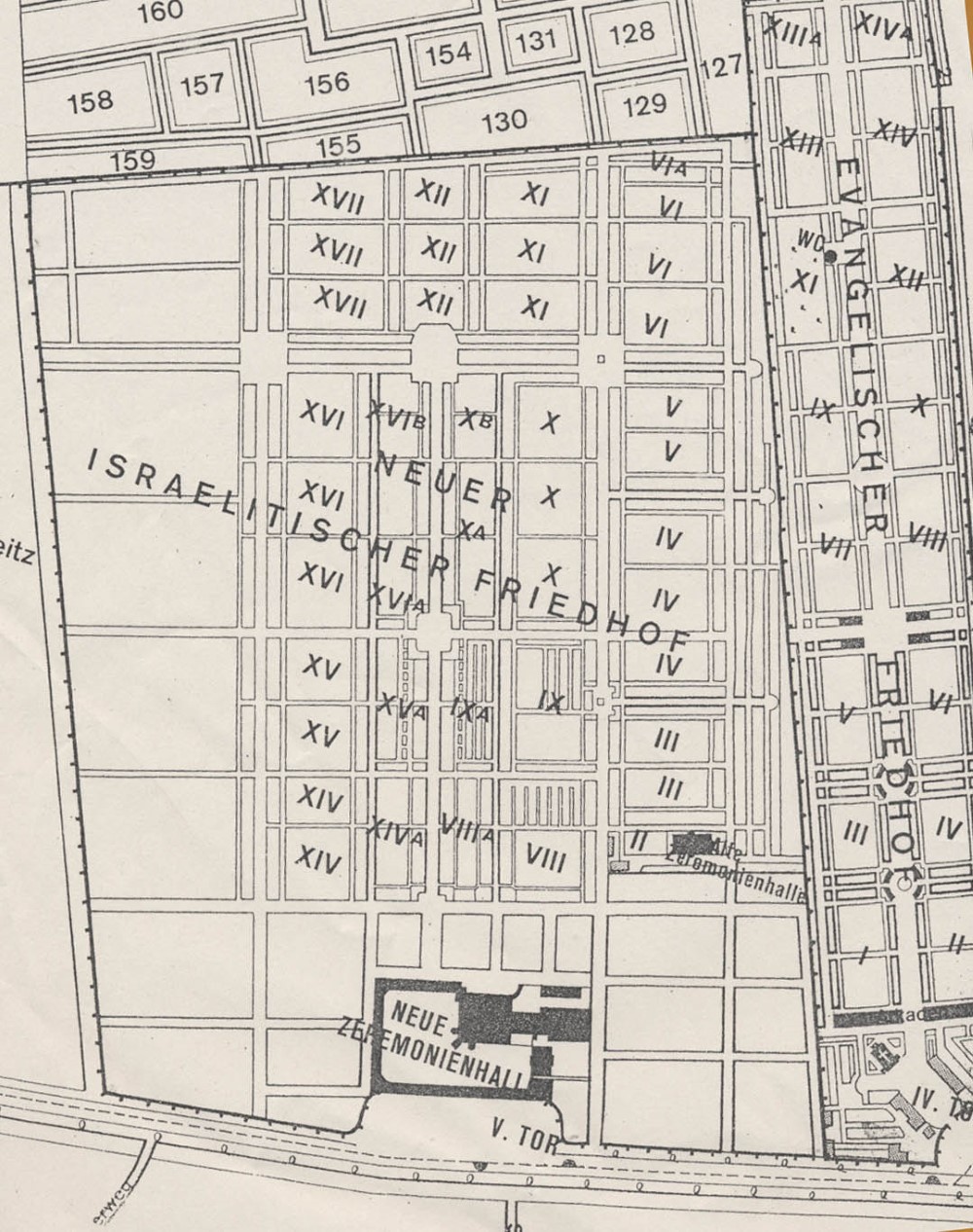 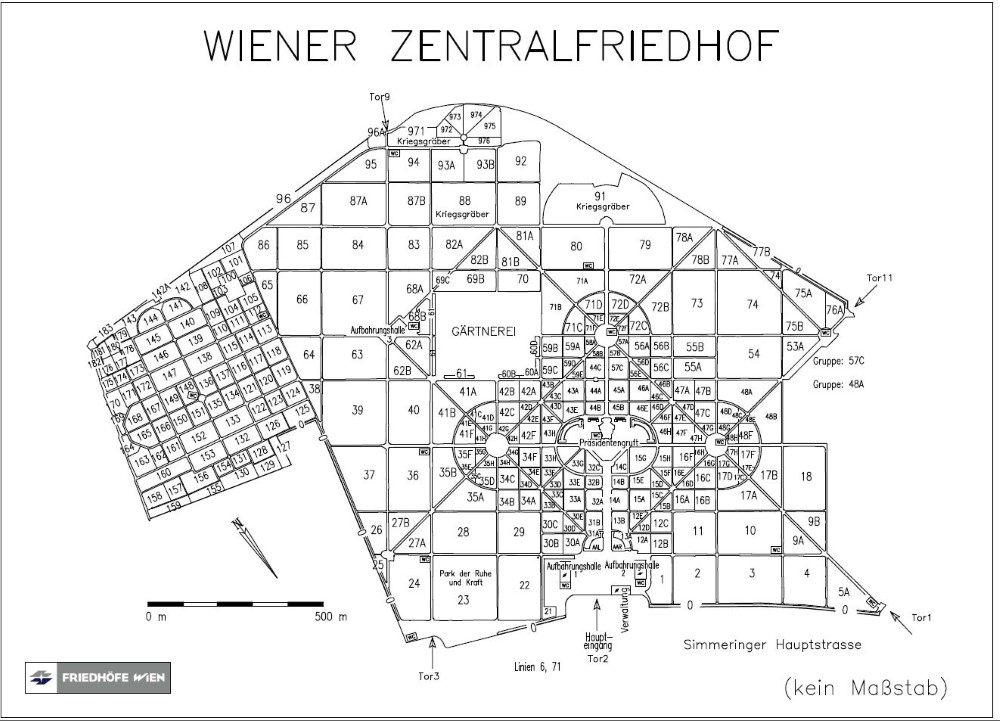 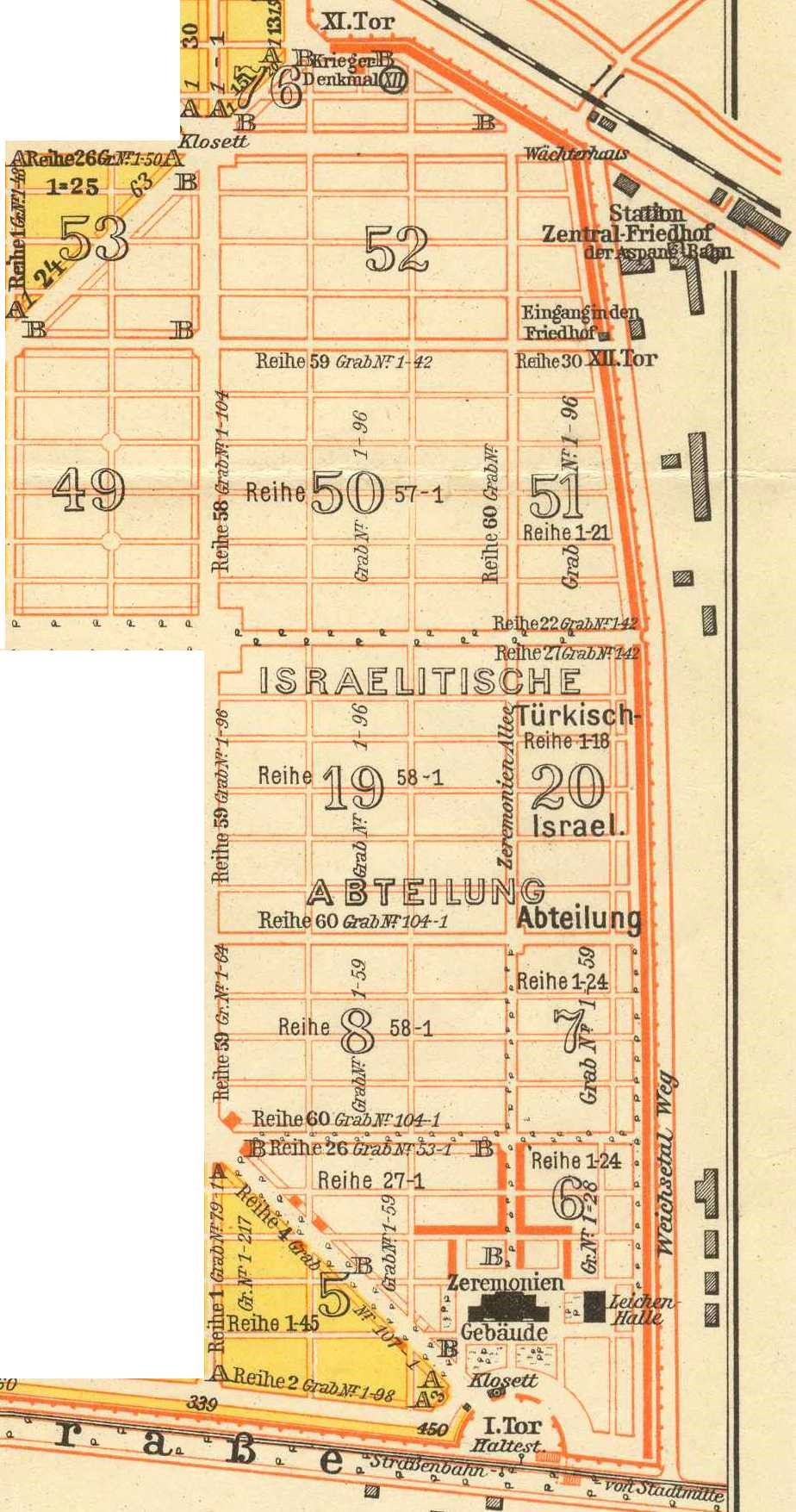 Unlike many others, the Vienna Central Cemetery is not one that has evolved slowly with the passing of time. The decision to establish a new, big cemetery for Vienna came in 1863 when it became clear that – due to industrialisation – the city’s population would eventually increase to such an extent that the existing communal cemeteries would prove insufficient.

City leaders expected that Vienna, then capital of the large Austro-Hungarian Empire, would grow to four million inhabitants by the end of the 20th century, as no one foresaw the Empire’s collapse in 1918. The city council therefore assigned an area significantly outside of the city’s borders and of such a gigantic dimension, that it would suffice for a long time to come. They decided in 1869 that a flat area in Simmering should be the site of the future Zentralfriedhof. The cemetery was designed in 1870; according to the plans of the Frankfurt landscape architects Karl Jonas Mylius and Alfred Friedrich Bluntschli who were awarded for their project per angusta ad augusta (from dire to sublime).

Opened All Saint’s Day 1874, far outside Vienna’s city borders. However the consecration of the cemetery was not without controversy: the interdenominational character of the new cemetery – the different faith groups being interred on the same ground – met with fierce resistance, of course, especially in conservative circles of the Roman Catholic Church.

This argument became even more aggressive when the city announced that it did not want an official Catholic opening of the new cemetery – but gave a substantial amount of money toward the construction of a segregated Jewish section. In the end, the groups reached an agreement and the Catholic representatives opened the Zentralfriedhof with a small ceremony, refraining from a large public show. So the new cemetery was inaugurated almost unnoticed in the early morning hours 31 October 1874, by Vienna Mayor Baron Cajetan von Felder and Cardinal Joseph Othmar Rauscher to avoid an escalation of the public controversy.

The official opening of the Central Cemetery occurred the following day. The first burial was that of Jacob Zelzer, followed by 15 others that day. The grave of Jacob Zelzer still exists near the administration building at the cemetery wall.

The cemetery spans 2.5 km2 (620 acres) with 330,000 interments and up to 25 burials daily. It is also second largest cemetery, after the 4 km2 (990 acres) of Hamburg’s Ohlsdorf Cemetery, largest in Europe by number of interments and area.

In its early incarnations, it was so unpopular due to the distance from the city center that the authorities had to think of ways to make it more attractive – hence the development of the Ehrengräber or honorary graves as a kind of tourist attraction.

Vienna is a city of music since time immemorial, and the municipality expressed gratitude to composers by granting them monumental tombs. Interred in the Zentralfriedhof are notables such as Ludwig van Beethoven; Franz Schubert, who were moved to the city in 1888; Johannes Brahms; Antonio Salieri; Johann Strauss II and Arnold Schoenberg. A cenotaph honours Wolfgang Amadeus Mozart, who is buried in nearby St. Marx Cemetery.

In addition to the Catholic section, the cemetery houses a Protestant cemetery (opened 1904) and two Jewish cemeteries.

Although the older of the two, established in 1863, was destroyed by the Nazis during the Kristallnacht, around 60,000 graves remain intact. Cemetery records indicate 79,833 Jewish burials as of 10 July 2011. Prominent burials here include those of the Rothschild family and that of the author Arthur Schnitzler.

The second Jewish cemetery was built in 1917 and is still in use today. There were 58,804 Jewish burials in the new section as of 21 November 2007. Officials discovered desecration of 43 Jewish graves in the two Jewish sections 29 June 2012, allegedly as an anti-Semitic act – the stones and slabs were toppled or damaged.