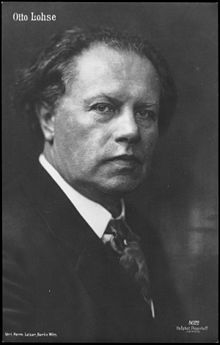 German conductor and composer. He studied theory with Felix Draeseke, Rischbieter and Kretschmer, conducting with Franz Wüllner, the cello with Grützmacher and the piano with H.J. Richter. After playing the cello at the Dresden Hoftheater (1877–9), he began his conducting career in Riga. He was subsequently brought to the Theater am Dammtor in Hamburg by the impresario Bernhard Baruch. Also at a year at The Damrosch Opera Company in America.

Born in Dresden, Lohse studied with Hans Richter and Felix Draeseke at the Dresden Conservatory. In 1882 he became conductor of two music societies in Riga, the Wagner Society and the Imperial Russian Music Society; seven year’s later he became the first kapellmeister of the city’s Stadttheater.

In 1893 he became director of the Hamburg Stadttheater; while in Hamburg he married singer Katharina Klafsky. The couple traveled to the United States in 1896 to join the Damrosch Opera Company, returning to Germany a year later.

He also directed performances of Richard Wagner’s music dramas at Covent Garden, London, from 1901 until 1904. Lohse received the honorary title of Royal Professor in 1916. His only opera, Der Prinz wider Willen, was performed in Riga in 1890.

1920 performance with the Philharmonie of Baden-Baden.