Casella was born in Turin, the son of Maria (née Uordino) and Carlo Casella. His family included many musicians: his grandfather, a friend of Paganini’s, was first cello in the San Carlo Theatre in Lisbon and eventually became soloist in the Royal Chapel in Turin. Alfredo’s father, Carlo, was also a professional cellist, as were Carlo’s brothers Cesare and Gioacchino; his mother was a pianist, who gave the boy his first music lessons.

Alfredo entered the Conservatoire de Paris in 1896 to study piano under Louis Diémer and composition under Gabriel Fauré; in these classes, George Enescu and Maurice Ravel were among his fellow students. During his Parisian period, Claude Debussy, Igor Stravinsky, and Manuel de Falla were acquaintances, and he was in contact with Ferruccio Busoni, Gustav Mahler, and Richard Strauss as well.

Casella developed a deep admiration for Debussy’s output after hearing Prélude à l’après-midi d’un faune in 1898, but pursued a more romantic vein (stemming from Strauss and Mahler) in his own writing of this period, rather than turning to impressionism. His first symphony of 1905 is from this time, and it is with this work that Casella made his debut as a conductor when he led the symphony’s premiere in Monte Carlo in 1908. 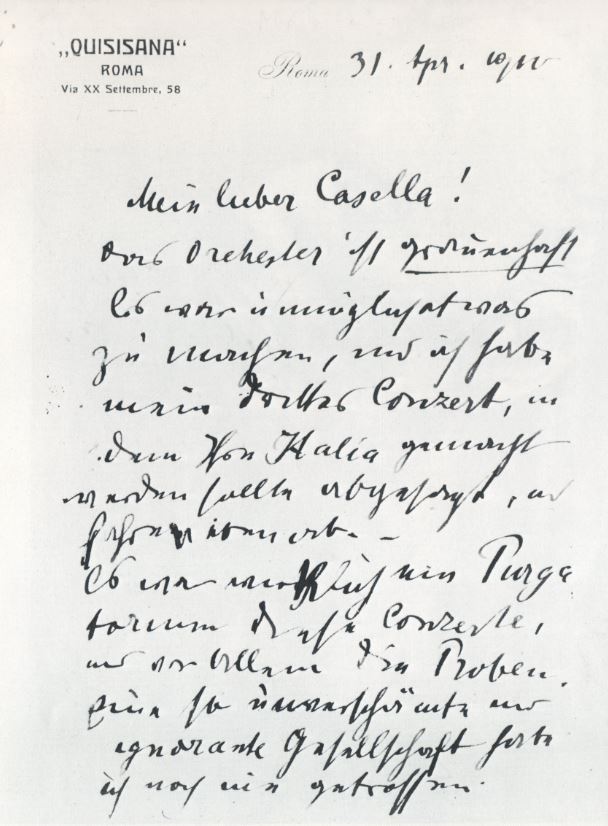 Back in Italy during World War I, he began teaching piano at the Accademia Nazionale di Santa Cecilia in Rome. From 1927 to 1929 Casella was the principal conductor of the Boston Pops, where he was succeeded by Arthur Fiedler. He was one of the best-known Italian piano virtuosos of his generation and together with Arturo Bonucci (cello) and Alberto Poltronieri (violin) he formed the Trio Italiano in 1930. This group played to great acclaim in Europe and America. His stature as a pianist and his work with the trio gave rise to some of his best-known compositions, including A Notte Alta, the Sonatina, Nove Pezzi, and the Six Studies, Op. 70, for piano. For the Trio to play on tour, he wrote the Sonata a Tre and the Triple Concerto.

Casella had his biggest success with the ballet La Giara, set to a scenario by Pirandello; other notable works include Italia, the Concerto Romano (inspired by the Wanamaker Organ), Partita and Scarlattiana for piano and orchestra, the Violin and Cello Concerti, Paganiniana, and the Concerto for Piano, Strings, Timpani and Percussion. Amongst his chamber works, both Cello Sonatas are played with some frequency, as is the very beautiful late Harp Sonata, and the music for Flute and Piano. Casella also made live-recording player piano music rolls for the Aeolian Duo-Art system, all of which survive today and can be heard. In 1923, together with Gabriele D’Annunzio and Gian Francesco Malipiero from Venice, he founded an association to promote the spread of modern Italian music, the “Corporation of the New Music.”

The resurrection of Vivaldi’s works in the 20th century is mostly thanks to the efforts of Casella, who in 1939 organised the now historic Vivaldi Week, in which the poet Ezra Pound was also involved. Since then Vivaldi’s compositions have enjoyed almost universal success and the advent of historically informed performance has catapulted him to stardom once again. In 1947 the Venetian businessman Antonio Fanna founded the Istituto Italiano Antonio Vivaldi, with the composer Malipiero as its artistic director, with the purpose of promoting Vivaldi’s music and putting out new editions of his works. Casella’s work on behalf of his Italian Baroque musical ancestors put him at the centre of the early 20th Century Neoclassical revival in music and influenced his own compositions profoundly. His editions of Johann Sebastian Bach and Ludwig van Beethoven’s piano works, along with many others, proved extremely influential on the musical taste and performance style of Italian players in the following generations.

Usually the generazione dell’ottanta (“generation of ’80”), including Casella himself, Malipiero, Respighi, Pizzetti, and Alfano — all composers born around 1880, the post-Puccini generation — concentrated on writing instrumental works, rather than the operas in which Puccini and his musical forebears had specialised. Members of this generation were the dominant figures in Italian music after Puccini’s death in 1924; they had their counterparts in Italian literature and painting. Casella, who was especially passionate about painting, accumulated an important collection of art and sculptures. He was perhaps the most “international” in outlook and stylistic influences of the generazione dell’ottanta, owing at least in part to his early musical training in Paris and the circle in which he lived and worked while there.