He soon gave up instrumental study to concentrate on counterpoint and fugue, although he remained a fine pianist. His natural musical talent was highly thought of by, among others, Modest Mussorgsky, and during the 1870s he became associated with the group of composers known as The Mighty Handful. He entered the composition classes of Nikolai Rimsky-Korsakov, but was expelled for absenteeism in 1876. In 1878 he was readmitted to these classes to help him complete his graduation composition.

He taught at the St Petersburg Conservatory from 1878, his pupils including Sergei Prokofiev, Nikolai Myaskovsky, Mikhail Gnesin, Lazare Saminsky and Boris Asafyev. See: List of music students by teacher: G to M#Anatoly Lyadov. Consistent with his character, he was a variable but at times brilliant instructor. Conductor Nikolai Malko, who studied harmony with him at the conservatory, wrote, “Lyadov’s critical comments were always precise, clear, understandable, constructive, and brief…. And it was done indolently, without haste, sometimes seemingly disdainfully. He could suddenly stop in midword, take out a small scissors from his pocket and start doing something with his fingernail, while we all waited.”

Igor Stravinsky remarked that Lyadov was as strict with himself as he was with his pupils, writing with great precision and demanding fine attention to detail. Prokofiev recalled that even the most innocent musical innovations drove the conservative Lyadov crazy. “Shoving his hands in his pockets and rocking in his soft woollen shoes without heels, he would say, ‘I don’t understand why you are studying with me. Go to Richard Strauss. Go to Debussy.’ This was said in a tone that meant ‘Go to the devil!'” Still, Lyadov told his acquaintances about Prokofiev. “I am obliged to teach him. He must form his technique, his style—first in piano music.” In 1905 he resigned briefly over the dismissal of Rimsky-Korsakov, only to return when Rimsky-Korsakov was reinstated.

Lyadov introduced timber millionaire and philanthropist Mitrofan Belyayev to the music of the teenage Alexander Glazunov. Interest in Glazunov’s music quickly grew to Belyayev’s patronage of an entire group of Russian nationalist composers. In 1884 he instituted the Russian Symphony Concerts and established an annual Glinka Prize. The following year he started his own publishing house in Leipzig. He published music by Glazunov, Lyadov, Rimsky-Korsakov and Borodin at his own expense. In addition, young composers appealed for Belyayev’s help. Belyayev asked Lyadov to serve with Glazunov and Rimsky-Korsakov on an advisory council to help select from these applicants. The group of composers that formed eventually became known as the Belyayev Circle.

In November 1887, Lyadov met Pyotr Ilyich Tchaikovsky. Nearly seven years earlier Tchaikovsky had given a negative opinion to the publisher Besel about a piano arabesque Lyadov had written. Even before this visit, though, Tchaikovsky’s opinion of Lyadov may have been changing. He had honored Lyadov with a copy of the score of his Manfred Symphony. Now that he had actually met the man face-to-face, the younger composer became “dear Lyadov.” He became a frequent visitor to Lyadov and the rest of the Belyayev Circle, beginning in the winter of 1890.

He married in 1884, acquiring through his marriage a country property in Polynovka estate, Borovichevsky uezd, Novgorod Governorate, where he spent his summers composing unhurriedly, and where he died in 1914. 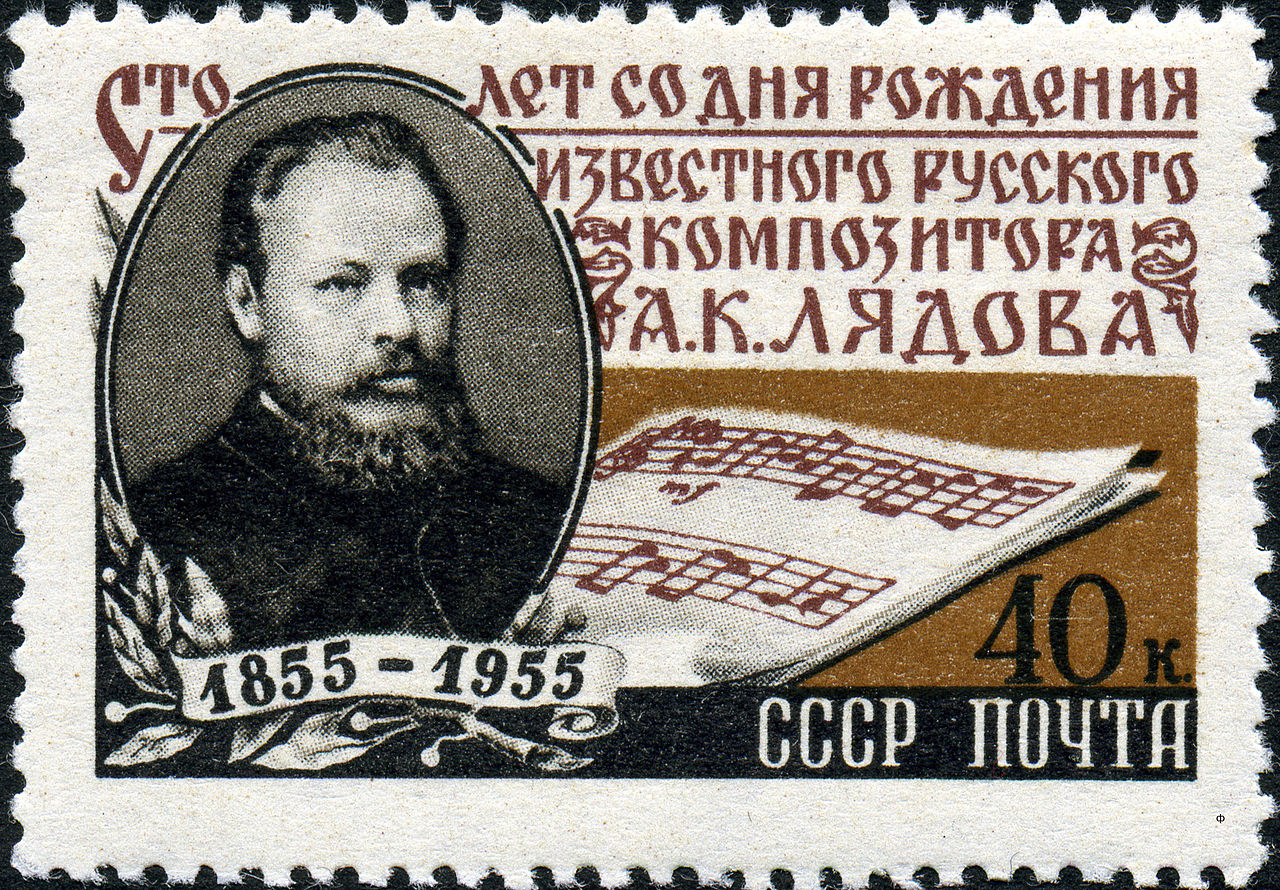 While Lyadov’s technical facility was highly regarded by his contemporaries, his unreliability stood in the way of his advancement. His published compositions are relatively few in number through his natural indolence and a certain self-critical lack of confidence. Many of his works are variations on or arrangements of pre-existing material (for example his Russian Folksongs, Op. 58). He did compose a large number of piano miniatures, of which his Musical Snuffbox of 1893 is perhaps most famous.

Like many of his contemporaries, Lyadov was drawn to intensely Russian subjects. Much of his music is programmatic; for example his tone poems Baba Yaga Op. 56, Kikimora Op. 63, The Enchanted Lake Op. 62. These short tone poems, probably his most popular works, exhibit an exceptional flair for orchestral tone color. In his later compositions he experimented with extended tonality, like his younger contemporary Alexander Scriabin.

It has been argued that Lyadov never completed a large-scale work. However, many of his miniatures have their place in the repertory. In 1905 Lyadov began work on a new ballet score, but when the work failed to progress, he shifted gears to work on an opera instead. Lyadov never finished the opera, but sections of the work found realization in the short tone poems Kikimora and The Enchanted Lake.

In 1909 Sergei Diaghilev commissioned Lyadov to orchestrate a number for the Chopin-based ballet Les Sylphides, and on 4 September that year wrote to the composer asking for a new ballet score for the 1910 season of his Ballets Russes; however, despite the much-repeated story that Lyadov was slow to start composing the work which eventually became The Firebird (famously fulfilled by the then relatively inexperienced Igor Stravinsky), there is no evidence that Lyadov ever accepted the commission.