André Chantemesse was a French bacteriologist born in Le Puy-en-Velay, Haute-Loire. From 1880 to 1885 he served as interne des hôpitaux in Paris, earning his doctorate in 1884 with a dissertation on adult tuberculous meningitis titled Étude sur la méningite tuberculeuse de l’adulte les formes anormales en particulier. In 1885 he traveled to Berlin to study bacteriology at the laboratory of Robert Koch (1843-1910).

After his return to Paris, he became associated with the work of Louis Pasteur. In 1886 he began extensive research of typhoid fever. In collaboration with Georges-Fernand Widal (1862–1929), he studied the aetiology of the disease, and in 1888 developed an experimental antityphoid inoculation. Also with Widal, he isolated the bacillus that was the cause of dysentery, however the two scientists were unable to establish the aetiological link to the disease. 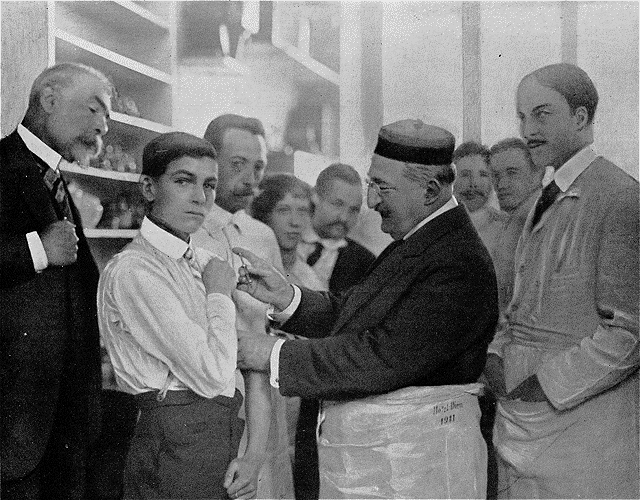 From 1897 to 1903 he was a professor of comparative and experimental pathology in Paris, becoming a member of the Académie de Médecine in 1901. In 1904 he became a member of the editorial board of Annales de l’Institut Pasteur. His likeness, together with the rest of the Paris Faculty of Medicine, was included in a 1904 painting by Adrien Barrère. The image was intended to be satirical and the assembled professors give the impression of family butchers.