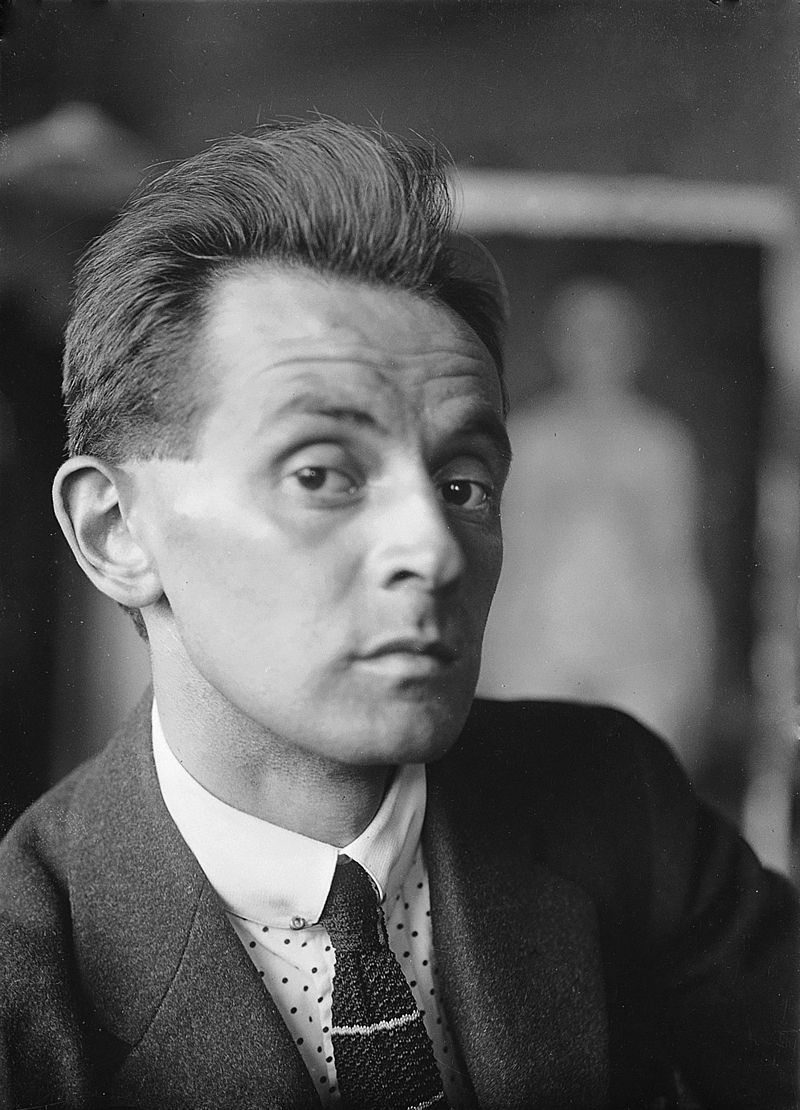 Egon Schiele was an Austrian painter. A protégé of Gustav Klimt (1862-1918), Schiele was a major figurative painter of the early 20th century. His work is noted for its intensity and its raw sexuality, and the many self-portraits the artist produced, including naked self-portraits. The twisted body shapes and the expressive line that characterize Schiele’s paintings and drawings mark the artist as an early exponent of Expressionism.

Schiele was born in 1890 in Tulln, Lower Austria. His father, Adolf Schiele, was the station master of the Tulln station in the Austrian State Railways; his mother Marie, née Soukupová, was a Czech from ?eský Krumlov (Krumau), in southern Bohemia. As a child, Schiele was fascinated by trains, and would spend many hours drawing them, to the point where his father felt obliged to destroy his sketchbooks. When he was 11 years old, Schiele moved to the nearby city of Krems (and later to Klosterneuburg) to attend secondary school. To those around him, Schiele was regarded as a strange child. Shy and reserved, he did poorly at school except in athletics and drawing, and was usually in classes made up of younger pupils. He also displayed incestuous tendencies towards his younger sister Gertrude (who was known as Gerti), and his father, well aware of Egon’s behaviour, was once forced to break down the door of a locked room that Egon and Gerti were in to see what they were doing (only to discover that they were developing a film). When he was sixteen he took the twelve-year-old Gerti by train to Trieste without permission and spent a night in a hotel room with her.

When Schiele was 15 years old, his father died from syphilis, and he became a ward of his maternal uncle, Leopold Czihaczec, also a railway official. Although he wanted Schiele to follow in his footsteps, and was distressed at his lack of interest in academia, he recognised Schiele’s talent for drawing and unenthusiastically allowed him a tutor; the artist Ludwig Karl Strauch. In 1906 Schiele applied at the Kunstgewerbeschule (School of Arts and Crafts) in Vienna, where Gustav Klimt had once studied. Within his first year there, Schiele was sent, at the insistence of several faculty members, to the more traditional Akademie der Bildenden Künste in Vienna in 1906. His main teacher at the academy was Christian Griepenkerl, a painter whose strict doctrine and ultra-conservative style frustrated and dissatisfied Schiele and his fellow students so much that he left three years later.

In 1907, Schiele sought out Gustav Klimt, who generously mentored younger artists. Klimt took a particular interest in the young Schiele, buying his drawings, offering to exchange them for some of his own, arranging models for him and introducing him to potential patrons. He also introduced Schiele to the Wiener Werkstätte, the arts and crafts workshop connected with the Secession. In 1908 Schiele had his first exhibition, in Klosterneuburg. Schiele left the Academy in 1909, after completing his third year, and founded the Neukunstgruppe (“New Art Group”) with other dissatisfied students.

Klimt invited Schiele to exhibit some of his work at the 1909 Vienna Kunstschau, where he encountered the work of Edvard Munch, Jan Toorop, and Vincent van Gogh among others. Once free of the constraints of the Academy’s conventions, Schiele began to explore not only the human form, but also human sexuality. At the time, many found the explicitness of his works disturbing.

From then on, Schiele participated in numerous group exhibitions, including those of the Neukunstgruppe in Prague in 1910 and Budapest in 1912; the Sonderbund, Cologne, in 1912; and several Secessionist shows in Munich, beginning in 1911. In 1913, the Galerie Hans Goltz, Munich, mounted Schiele’s first solo show. A solo exhibition of his work took place in Paris in 1914.

In 1911, Schiele met the seventeen-year-old Walburga (Wally) Neuzil, who lived with him in Vienna and served as a model for some of his most striking paintings. Very little is known of her, except that she had previously modelled for Gustav Klimt and might have been one of his mistresses. Schiele and Wally wanted to escape what they perceived as the claustrophobic Viennese milieu, and went to the small town of ?eský Krumlov (Krumau) in southern Bohemia. Krumau was the birthplace of Schiele’s mother; today it is the site of a museum dedicated to Schiele. Despite Schiele’s family connections in Krumau, he and his lover were driven out of the town by the residents, who strongly disapproved of their lifestyle, including his alleged employment of the town’s teenage girls as models.

Together they moved to Neulengbach, 35 km west of Vienna, seeking inspirational surroundings and an inexpensive studio in which to work. As it was in the capital, Schiele’s studio became a gathering place for Neulengbach’s delinquent children. Schiele’s way of life aroused much animosity among the town’s inhabitants, and in April 1912 he was arrested for seducing a young girl below the age of consent.

When they came to his studio to place him under arrest, the police seized more than a hundred drawings which they considered pornographic. Schiele was imprisoned while awaiting his trial. When his case was brought before a judge, the charges of seduction and abduction were dropped, but the artist was found guilty of exhibiting erotic drawings in a place accessible to children. In court, the judge burned one of the offending drawings over a candle flame. The twenty-one days he had already spent in custody were taken into account, and he was sentenced to a further three days’ imprisonment. While in prison, Schiele created a series of 12 paintings depicting the difficulties and discomfort of being locked in a jail cell.

In 1914, Schiele glimpsed the sisters Edith and Adéle Harms, who lived with their parents across the street from his studio in the Viennese suburb of Hietzing, 101 Hietzinger Hauptstrasse. They were a middle-class family and Protestant by faith; their father was a master locksmith. In 1915, Schiele chose to marry the more socially acceptable Edith, but had apparently expected to maintain a relationship with Wally. However, when he explained the situation to Wally, she left him immediately and never saw him again. This abandonment led him to paint Death and the Maiden, where Wally’s portrait is based on a previous pairing, but Schiele’s is newly struck. (In February 1915, Schiele wrote a note to his friend Arthur Roessler stating: “I intend to get married, advantageously. Not to Wally.”) Despite some opposition from the Harms family, Schiele and Edith were married on 17 June 1915, the anniversary of the wedding of Schiele’s parents.

Despite avoiding conscription for almost a year, World War I now began to shape Schiele’s life and work. Three days after his wedding, Schiele was ordered to report for active service in the army where he was initially stationed in Prague. Edith came with him and stayed in a hotel in the city, while Egon lived in an exhibition hall with his fellow conscripts. They were allowed by Schiele’s commanding officer to see each other occasionally. Despite his military service, Schiele was still exhibiting in Berlin. During the same year, he also had successful shows in Zürich, Prague, and Dresden. His first duties consisted of guarding and escorting Russian prisoners. Because of his weak heart and his excellent handwriting, Schiele was eventually given a job as a clerk in a POW camp near the town of Mühling. 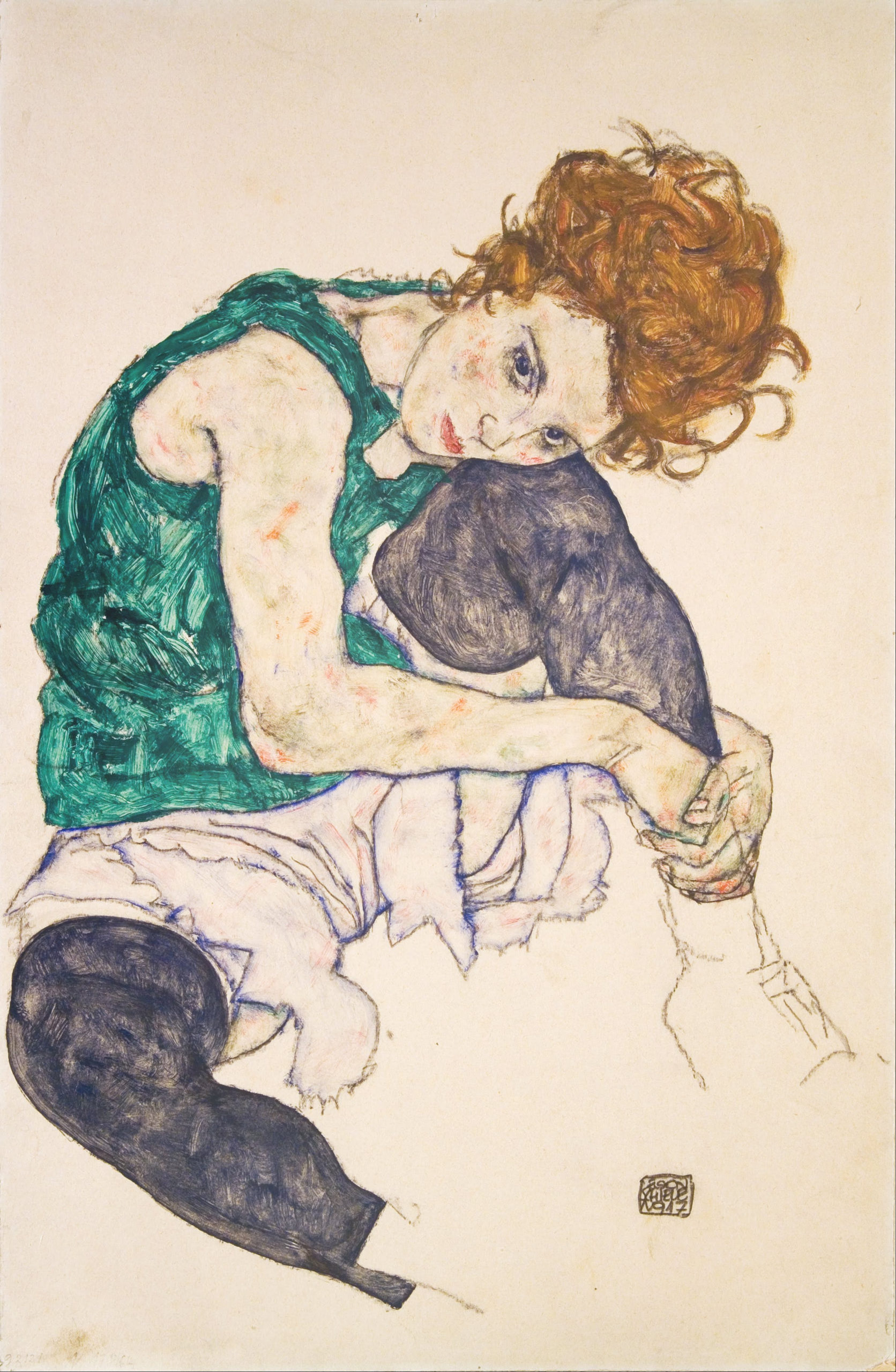 There he was allowed to draw and paint imprisoned Russian officers, and his commander, Karl Moser (who assumed that Schiele was a painter and decorator when he first met him), even gave him a disused store room to use as a studio. Since Schiele was in charge of the food stores in the camp, he and Edith could enjoy food beyond rations. By 1917, he was back in Vienna, able to focus on his artistic career. His output was prolific, and his work reflected the maturity of an artist in full command of his talents. He was invited to participate in the Secession’s 49th exhibition, held in Vienna in 1918. Schiele had fifty works accepted for this exhibition, and they were displayed in the main hall. He also designed a poster for the exhibition, which was reminiscent of the Last Supper, with a portrait of himself in the place of Christ. The show was a triumphant success, and as a result, prices for Schiele’s drawings increased and he received many portrait commissions.

In the autumn of 1918, the Spanish flu pandemic that claimed more than 20,000,000 lives in Europe reached Vienna. Edith, who was six months pregnant, succumbed to the disease on 28 October. Schiele died only three days after his wife. He was 28 years old. During the three days between their deaths, Schiele drew a few sketches of Edith; these were his last works.

In his early years, Schiele was strongly influenced by Klimt and Oskar Kokoschka (1886-1980). Although imitations of their styles, particularly with the former, are noticeably visible in Schiele’s first works, he soon evolved into his own distinctive style.

Schiele’s earliest works between 1907 and 1909 contain strong similarities with those of Klimt, as well as influences from Art Nouveau. In 1910, Schiele began experimenting with nudes and within a year a definitive style featuring emaciated, sickly-coloured figures, often with strong sexual overtones. Schiele also began painting and drawing children.

Progressively, Schiele’s work grew more complex and thematic, and after his imprisonment in 1912 he dealt with themes such as death and rebirth, although female nudes remained his main output. During the war Schiele’s paintings became larger and more detailed, when he had the time to produce them. His military service however gave him limited time, and much of his output consisted of linear drawings of scenery and military officers. Around this time Schiele also began experimenting with the theme of motherhood and family. His wife Edith was the model for most of his female figures, but during the war due to circumstance, many of his sitters were male. Since 1915, Schiele’s female nudes had become fuller in figure, but many were deliberately illustrated with a lifeless doll-like appearance. Towards the end of his life, Schiele drew many natural and architectural subjects. His last few drawings consisted of female nudes, some in masturbatory poses.