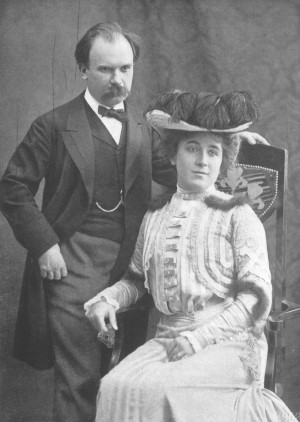 Educated in Britain, d’Albert showed early musical talent and, at the age of seventeen, he won a scholarship to study in Austria. Feeling a kinship with German culture and music, he soon emigrated to Germany, where he studied with Franz Liszt and began a career as a concert pianist. D’Albert repudiated his early training and upbringing in Scotland and considered himself German.

While pursuing his career as a pianist, d’Albert focused increasingly on composing, producing 21 operas and a considerable output of piano, vocal, chamber and orchestral works. His most successful opera was Tiefland, which premiered in Prague in 1903. His successful orchestral works included his cello concerto (1899), a symphony, two string quartets and two piano concertos. In 1907, d’Albert became the director of the Hochschule für Musik in Berlin, where he exerted a wide influence on musical education in Germany. He also held the post of Kapellmeister to the Court of Weimar.

D’Albert was married six times, including to the pianist-singer Teresa Carreño, and was successively a British, German and Swiss citizen.

D’Albert was born at 4 Crescent Place, Glasgow, Scotland, to an English mother, Annie Rowell, and a German-born father of French and Italian descent, Charles Louis Napoléon d’Albert (1809–1886), whose ancestors included the composers Giuseppe Matteo Alberti and Domenico Alberti. D’Albert’s father was a pianist, arranger and a prolific composer of salon music who had been ballet-master at the King’s Theatre and at Covent Garden. D’Albert was born when his father was 55 years old. The Musical Times wrote in 1904 that “This, and other circumstances, accounted for a certain loneliness in the boy’s home-life and the years of his childhood. He was misunderstood, and ‘cribbed, cabined, and confined’ to such an extent as to largely prejudice him against the country which gave him birth”.

D’Albert was brought up in Glasgow and taught music by his father until he won a scholarship to the new National Training School for Music (forerunner of the Royal College of Music) in London, which he entered in 1876 at the age of 12.D’Albert studied at the National Training School with Ernst Pauer, Ebenezer Prout, John Stainer and Arthur Sullivan. By the age of 14, he was winning public praise from The Times as “a bravura player of no mean order” in a concert in October 1878. He played Schumann’s Piano Concerto at the Crystal Palace in 1880, receiving more encouragement from The Times: “A finer rendering of the work has seldom been heard.” Also in 1880, d’Albert arranged the piano reduction for the vocal score of Sullivan’s sacred music drama The Martyr of Antioch, to accompany the chorus in rehearsal. He is also credited with writing the overture to Gilbert and Sullivan’s 1881 opera, Patience.

For many years, d’Albert dismissed his training and work during this period as worthless. The Times wrote that he “was born and educated in England, and won his earliest successes in England, although, in a freak of boyish impetuosity, he repudiated some years ago all connexion with this country, where, according to his own account, he was born by mere accident and where he learnt nothing.” In later years, however, he modified his views: “The former prejudice which I had against England, which several incidents aroused, has completely vanished since many years.”

In 1881, Hans Richter invited d’Albert to play his first piano concerto, which was “received with enthusiasm”. This seems to have been d’Albert’s lost concerto in A major, not the work published three years later as his Piano Concerto No. 1 in B minor, Op. 2. In the same year d’Albert won the Mendelssohn Scholarship, enabling him to study in Vienna, where he met Johannes Brahms, Franz Liszt and other important musicians who influenced his style. D’Albert, retaining his early enthusiasm for German culture and music (“hearing Tristan und Isolde had a greater influence on him than the education he received from his father or … at the National Training School for Music”) changed his first name from Eugène to Eugen and emigrated to Germany, where he became a pupil of the elderly Liszt in Weimar.

In Germany and Austria, d’Albert built a career as a pianist. Liszt called him “the second Tausig”, and d’Albert can be heard in an early recording of Liszt works. He played his own piano concerto with the Vienna Philharmonic Orchestra in 1882, the youngest pianist who had appeared with the orchestra. D’Albert toured extensively, including in the United States from 1904 to 1905. His virtuoso technique was compared to that of Busoni. He was praised for his playing of J. S. Bach’s preludes and fugues and of Beethoven’s sonatas. “As an exponent of Beethoven, Eugen d’Albert has few, if any, equals.” Gradually, d’Albert’s work as a composer occupied his time more and more, and he reduced his concert playing. He was the recipient of a number of dedications, most notably of Richard Strauss’s Burleske in D minor, which he premiered in 1890.

D’Albert was a prolific composer. His output includes a large volume of successful piano and chamber music and lieder. He also composed twenty-one operas, in a wide variety of styles, which premiered mostly in Germany. His first, Der Rubin (1893) was an oriental fantasy; Die Abreise (1898), which established him as an opera composer in Germany, was a one-act domestic comedy; Kain (1900) was a setting of the biblical story; and one of his last operas, Der Golem, was on a traditional Jewish theme. His most successful opera was his seventh, Tiefland, which premiered in Prague in 1903. When Thomas Beecham introduced the opera to London, The Times observed, “the scoring owes more than a little to the discipline of Sullivan; there is also a curiously English fragrance”. Tiefland played in opera houses throughout the world and has retained a place in the standard German and Austrian repertoire, with a production at the Deutsche Oper Berlin, in November 2007. According to biographer Hugh Macdonald, it “provides a link between Italian verismo and German expressionist opera, although the orchestral textures recall a more Wagnerian language.” Another stage success was a comic opera called Flauto solo in 1905. D’Albert’s most successful orchestral works included his cello concerto (1899), a symphony, two string quartets and two piano concertos. “Though not a composer of profound originality … he had an unfailing sense of dramatic appropriateness and all the resources of a symphonic technique to give it expression and was thus able to achieve success in so many styles”.

D’Albert edited critical editions of the scores of Beethoven and Bach, transcribed Bach’s organ works for the piano and wrote cadenzas for Beethoven’s piano concertos. In 1907, he succeeded Joseph Joachim (1831-1907) as director of the Hochschule für Musik in Berlin, in which capacity he had a wide influence on musical education in Germany. He also held the post of Kapellmeister to the Court of Weimar.

D’Albert’s friends included Richard Strauss, Hans Pfitzner, Engelbert Humperdinck, Ignatz Waghalter and Gerhart Hauptmann, the dramatist. He was married six times and had eight children. The first wife was Louise Salingré. The second, from 1892 to 1895, was the Venezuelan pianist, singer and composer Teresa Carreño, herself much married and considerably older than d’Albert. D’Albert and Carreño were the subject of a famous joke: “Come quick! Your children and my children are quarrelling again with our children!” The line, however, has also been attributed to others. His later wives were mezzo-soprano Hermine Finck, who originated the role of the witch in Humperdinck’s Hansel and Gretel; actress Ida Fulda; Friederike (“Fritzi”) Jauner; and Hilde Fels. His last companion was a mistress, Virginia Zanetti.

In 1914, d’Albert moved to Zurich and became a Swiss citizen. He died in 1932 at the age of 67 in Riga, Latvia, where he had travelled for a divorce from his sixth wife. In the weeks preceding his death, d’Albert was the subject of attacks by the press in Riga concerning his personal life. D’Albert was buried in the cemetery overlooking Lake Lugano in Morcote, Switzerland.