Zeisler was born Fannie Blumenfeld on July 16, 1863, in Bielitz, Austrian Silesia to Jewish parents. She emigrated to the United States with her family at the age of 4 in 1867. The family settled in Chicago, Illinois where they later changed their name to Bloomfield. She was the sister of Maurice Bloomfield and the aunt of Leonard Bloomfield.

At the age of six, before receiving any musical instruction, she began picking out tunes on the piano. Her first teachers were in Chicago; Bernard Ziehn and Carl Wolfsohn. In 1877, Annette Essipova, then on tour in the United States, heard her play and advised that she became a pupil of Theodor Leschetizky. She made her debut at the age of 11 in February 1875. In 1878, she returned to Austria to study in Vienna, under Leschetizky. While in Austria, she changed her name from Blumenfeld to Bloomfield. She returned to Chicago in 1883.

Bloomfield performed in concert in Chicago in April 1884. In January 1885, she debuted in New York City. Around the turn of the century, she made piano rolls of various piano compositions, Chopin’s Waltz No. 11 in G minor being among them.

Bloomfeld married the attorney Sigmund Zeisler in 1885 and had three sons: Leonard, Paul and Ernest. In 1888, she returned to Vienna to study with Leschetizky. She also began to tour in Europe and the United States, with the Chicago Symphony Orchestra. Her last performance was in February 1925 in Chicago. She played the Beethoven Andante Favori and concertos by Chopin and Schumann. Years active 1875-1925, associated act Theodor Leschetizky

“She plays like a man” was a near-refrain in critiques of Fannie Bloomfield Zeisler, a brilliant pianist who emerged in the young, male-dominated American concert world of the 1880s. With magnetic energy and articulate technique, Zeisler broke out of the “lady pianist” molds to become a virtuoso revered for her musical intellect, expressivity, bravura, and scintillating touch in a wide range of concert repertoire. Her popularity peaked in the late 1890s, following highly acclaimed European tours, and continued into the first two decades of the twentieth century. Through much of her life the pianist juggled fifty-engagement seasons with teaching (at Chicago’s Bush Temple of Music and in a private studio) and family duties; in her fifties, her career began to subside, affected by deaths in her family and health setbacks.

Fannie Bloomfield Zeisler was born on July 16, 1863, in Bielitz, Austrian Silesia, the youngest of three children of Bertha Jaeger and Salomon Blumenfeld. Her brothers were Sigmund and Moritz, later known as Maurice Bloomfield, a renowned Sanskrit scholar. In 1867, the four-year-old Fannie moved with her family from war-depressed Austria to Appleton, Wisconsin, where her father entered into a store partnership, then to Milwaukee, and, in 1870, to Chicago. In the family’s Chicago home, first located near the Blumenfelds’ dry-goods store in the city’s Jewish neighborhood, Fannie absorbed German Jewish values and traditions from her kosher-keeping grandmother Jaeger, her father, a Talmudic scholar, and her mother, an avid reader of German literature.

An intelligent and serious child, Fannie excelled in public school and early music study. She graduated with honors from Chicago’s Dearborn School for Girls, where she stood out as the only Jewish girl of her class. At seven, after being taught piano informally by her brother Moritz, she began three years of formal study with the theorist Bernhard Ziehn before working with the charismatic teacher Carl Wolfsohn. Following a debut at age eleven at a concert of Wolfsohn’s Beethoven Society on February 25, 1875, and reappearances with the organization, she auditioned for the touring Russian virtuoso Annette Essipoff in 1877 and, at her urging, set off for Vienna the following year to study with Theodor Leschetizky, accompanied by her mother and grandmother, and partially subsidized by local banker Henry Greenebaum. After one year at the Vienna Conservatory, Fannie began a rigorous course of study, lasting from 1879 to 1883, with Leschetizky. She became one of a luminous roster of pianists who would emerge from his studio.

Shortly after “graduation” performances in Vienna, Fannie returned to America and secured Henry Wolfsohn, brother of her early Chicago teacher, as her manager. Her American debut as a professional, on January 11, 1884, with Chicago’s Beethoven Society, was in essence a return engagement; her New York debut came on January 31, 1885, with a performance of Anton Rubinstein’s Concerto in D Minor conducted by Frank Van der Stücken. During the 1884–1885 season, she also appeared in a series of concerts with the Boston Symphony Orchestra under Wilhelm Gericke (1845-1925) and the New York Symphony under Walter Damrosch.

On October 18, 1885, she married her second cousin, Sigmund Zeisler. Sigmund Zeisler had met the pianist during her early Vienna years and, after completing a J.D. at the University of Vienna, followed her to Chicago. He then earned an L.L.B. at Northwestern University before acting as defense cocounsel in the explosive trial of the Haymarket Riot “anarchists.” The couple had their first child, Leonard, in 1886, followed by sons Paul, born in 1897, and Ernest, born in 1899. The Zeislers maintained a German American home in which High German was spoken. Although they were nonpracticing Jews, both belonged to Jewish clubs, associated with prominent Jewish leaders and artists, and supported Reform Judaism.

Despite her husband’s wishes that she settle down to a domestic life, Zeisler returned to Vienna by fall 1888 for a five-month “refresher course” with Leschetizky. Her determination to excel paid off within the next decade, when she solidified artistic relationships with the orchestras of New York, Boston, Chicago, and Pittsburgh, performed at the Columbian Exposition of 1893, toured Europe, and appeared in numerous recitals throughout the United States, including an 1896 West Coast tour that featured seven different programs in eighteen days. Although “nervous prostrations” had cut short her first European tour of 1893–1894, her triumphs during this and the following season in Europe marked a career turning point. By 1896, American writers were dubbing her “America’s greatest virtuoso” and, at times, the “Sarah Bernhardt of the piano.” Zeisler performed in England in 1898 and returned to the Continent in 1902 and 1912.

By the end of her career, Zeisler had appeared with major American and European orchestras under the prominent conductors Camille Chevillard, Walter Damrosch, Victor Herbert, Artur Nikisch, Anton Seidl, Leopold Stokowski, Richard Strauss, and Theodore Thomas. She had given regular solo recitals in major American concert halls, including annual appearances at Carnegie Hall, and had shared the stage with prominent concert artists. In addition to the then-standard concert repertoire, some of which she recorded for the Welte-Mignon and Ampico recording pianos, she promoted works of contemporary American and European composers. Two imposing programs put the final touches on an eminent career. In February 1920, in a single evening at Chicago’s Orchestra Hall, she overwhelmed her audience with three concertos (Mozart’s C Minor, Chopin’s F Minor, and Tchaikovsky’s B-flat Minor). She did a repeat performance at Carnegie Hall. On February 25, 1925, she celebrated the fiftieth anniversary of her early debut with performances of the Schumann A Minor and Chopin F Minor concertos with the Chicago Orchestra. 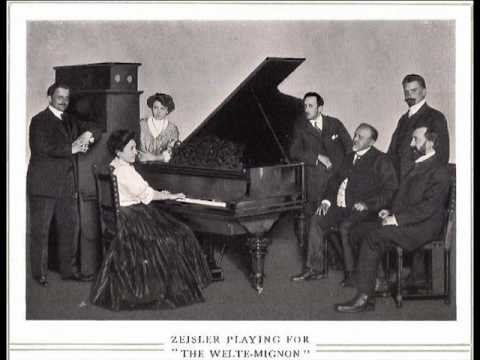 As performer and teacher, Zeisler was a central transmitter of Leschetizky’s high standards of pianism and artistry (preceding the Leschetizky-trained Paderewski on the American scene) and a widely publicized role model for two generations of young American musicians, many of them female. Her successes, built on her Viennese training, were buttressed by an uncannily strong will and by ideals of hard work and achievement instilled by her family.

Fannie Bloomfield Zeisler died of a heart attack on August 20, 1927, at age sixty-four. She was eulogized as a “truly great and noble woman” whose vigorous, intense life was filled with “idealism, indomitable courage, remitless industry, (and) absolute sincerity.”

The Austrian-born American pianist, Fannie (Fanny) Bloomfield-Zeisler, was born Fannie Blumenfeld in Bielitz, Austrian Silesia, and emigrated to the USA with her family at the age of 4 in 1867. The family settled in Chicago, Illinois, where they later changed their name to Bloomfield. She was the sister of Maurice Bloomfield and the aunt of Leonard Bloomfield. At the age of 6, before receiving any musical instruction, she began picking out tunes on the piano. Her first teachers were in Chicago: Bernard Ziehn and Carl Wolfsohn. In 1877, Annette Essipova, then on tour in the USA, heard her play and advised that she become a pupil of Theodor Leschetizky. Blumenfeld (as she then was) made her debut at the age of 11 in February 1875. In 1878, she returned to Austria to study in Vienna, under Theodor Leschetizky. While in Austria, she changed her name from Blumenfeld to Bloomfield.

At the expiration of five years she returned to the USA, where, from 1883 to 1893, Fannie Bloomfield repeatedly gave recitals, playing with all the leading orchestras throughout the country. She performed in concert in Chicago in April 1884. In January 1885, she debuted in New York City. In 1893 she made a tour through Europe; and such was her success at Berlin, Leipzig, Frankfurt, Vienna, and elsewhere, that she prolonged her stay abroad until 1895. During the season 1895-1896 she gave upward of 50 concerts in America, and in 1897 made a tour of the Pacific states. In 1898 she again went abroad, and gave a series of concerts in Great Britain and France. Around the turn of the century, she made piano rolls of various piano compositions, Frédéric Chopin’s Waltz No. 11 in G minor and L.v. Beethoven’s Piano Sonata, Op. 111 being among them. Her last performance was in February 1925 in Chicago. She played L.v. Beethoven’s Andante Favori and concertos by F. Chopin and Robert Schumann.

Fannie Bloomfeld married the attorney Sigmund Zeisler in 1885. In 1888, she returned to Vienna to study with Leschetizky. She also began to tour in Europe and the USA, with the Chicago Symphony Orchestra. The Zeislers had three sons: Leonard, Paul and Ernest.

Unlike Padrewski, Artur Rubinstein, and Vladimir Horowitz, Fannie Bloomfield-Zeisler’s name is not one that immediately springs to mind when the subject of the great pianists of the early 20th century is broached. Her name is most likely to be known to those who collect piano rolls, are well-versed in the histories of recital pianists, or have heard her piano roll performances reproduced from LP records. In her own day, however, Zeisler would have been one of the first pianists music fans would have thought of. Among her contemporaries were Ferruccio Busoni, Sergei Rachmaninov, and Moriz Rosenthal, all still in their prime and touring widely. This generation of pianists regarded Zeisler as an equal in terms of pianism.

Fannie Bloomfield-Zeisler only made piano rolls, never pursuing the alternate method of making phonograph recordings. Zeisler’s rolls were made for Welte-Mignon, the Welte system being the reproducing roll device of choice for concert pianists, as it recorded a maximum amount of the player’s touch, pedaling, and degrees of volume. Zeisler was a player equipped with a tremendous amount of strength in her arms. Her F. Chopin is quite different from the norm established nowadays – a lot of it is loud, played with energy and gusto, in the manner of Franz Liszt. Zeisler’s turbulent and stormy L.v. Beethoven’s Piano Sonata, Op. 111, is a marvel. The encore pieces, some rather rare, are delightful and interpreted with an ear toward variety of approach.