M. Welte & Sons, Freiburg and New York was a manufacturer of orchestrions, organs and reproducing pianos, established in Vöhrenbach by Michael Welte (1807-1880) in 1832. From 1832 until 1932, the firm produced mechanical musical instruments of the highest quality.

The firm’s founder, Michael Welte (1807-1880), and his company were prominent in the technical development and construction of orchestrions from 1850, until the early 20th century.

In 1872, the firm moved from the remote Black Forest town of Vöhrenbach into a newly developed business complex beneath the main railway station in Freiburg, Germany. They created an epoch-making development when they substituted the playing gear of their instruments from fragile wood pinned cylinders to perforated paper rolls. In 1883, Emil Welte (1841-1923), the eldest son of Michael, who had emigrated to the United States in 1865, patented the paper roll method (U.S. Patent 287,599), the model of the later piano roll.

In 1889, the technique was further perfected, and again protected through patents. Later, Welte built only instruments using the new technique, which was also licensed to other companies. With branches in New York and Moscow, and representatives throughout the world, Welte became very well known.

The firm was already famous for its inventions in the field of the reproduction of music when Welte introduced the Welte-Mignon reproducing piano in 1904. “It automatically replayed the tempo, phrasing, dynamics and pedalling of a particular performance, and not just the notes of the music, as was the case with other player pianos of the time.”

In September, 1904, the Mignon was demonstrated in the Leipzig Trade Fair. In March, 1905 it became better known when showcased “at the showrooms of Hugo Popper, a manufacturer of roll-operated orchestrions”. By 1906, the Mignon was also exported to the United States, installed to pianos by the firms Feurich and Steinway & Sons. As a result of this invention by Edwin Welte (1876-1958) and his brother-in-law Karl Bockisch (1874-1952), one could now record and reproduce the music played by a pianist as true to life as was technologically possible at the time. 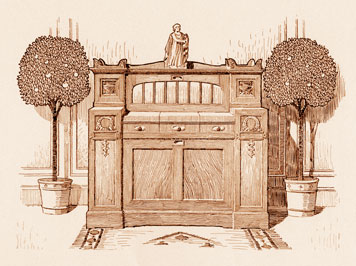 During the second half of the nineteenth century, the firm of Michael Welte und Söhne in Freiburg-im-Breisgau, southern Germany, achieved world renown as a manufacturer of orchestrions. Over several decades it built up a skilled workforce, both for the construction of the instruments and for the arrangement of the music rolls which caused them to play. So, at the turn of the 20th century, it was ideally placed to develop an experimental piano playing device, with the aim of reproducing the recorded performances of the finest pianists of the day.

Edwin Welte, son of the main director of the firm, Berthold Welte, and Edwin’s former schoolfriend, Karl Bockisch, together experimented and produced the first reproducing piano in the world. What we now know as the Welte-Mignon was originally called, quite simply, the Mignon, an essentially French word meaning both small and pleasing, to distinguish it from the firm’s other instruments, which were all considerably larger. 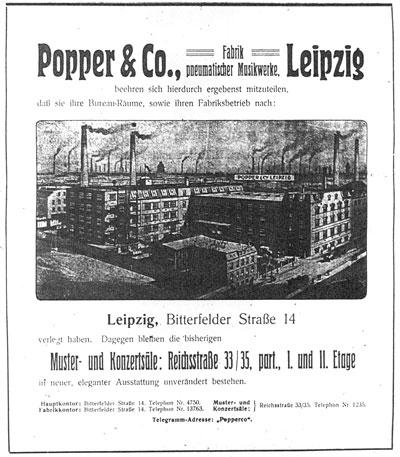 In February 1909, the Illustrirte Zeitung of Leipzig published an article on roll-operated instruments, which included clear illustrations of the workings of a Welte cabinet player. This was a later variety of Mignon which fitted in front of a normal piano, and played it by means of felt-covered wooden fingers, as shown below, the roll side first. It is readily apparent that the instrument was both complicated and substantial, not something to be moved about without the aid of household staff.

As with nearly all player and reproducing pianos, the Welte-Mignon is powered by suction, and that simple fact may be enough for you. It uses pneumatic valves and motors, just like any other player piano, although its valves are a little different from most. But the more complex mechanisms found within it are those which control the dynamics of the music, according to coded perforations located towards the edges of the rolls.

The Mignon splits its pneumatic mechanism into two sections, with the division occurring between F# and G above middle C. The historical reasons for this break point are not immediately clear, especially since most player pianos are divided between the E and F just below this, which is the actual halfway point of the normal keyboard. 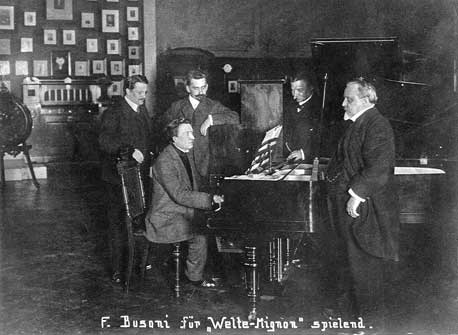 A number of reproducing pianos make use of what are known as lock and cancel valves, allowing perforations on the roll to be only momentary, but to have a lasting effect. This avoids the need for extended perforations, which can lead to weakness of the paper and the consequent risk of malfunction. The firm of Michael Welte and Sons was already using such devices for its organs and orchestrions, and so their application to the Welte-Mignon was quite a natural progression. 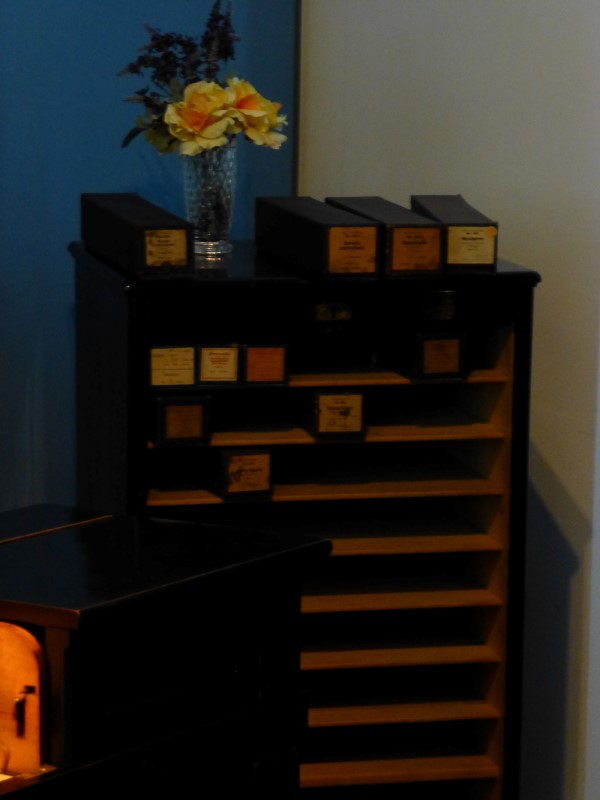 Piano rolls, a medium with a deservedly bad reputation. The integrity of many rolls was compromised by extensive doctoring, both to correct wrong or mistimed notes and to “enhance” the original with new harmonies, runs and doublings. Even when uncorrupted, standard rolls had no quality, as all notes sounded at the same volume and with the same flat, staccato tone. Fine for a barroom, but hardly genuine art.

Mahler’s rolls, though, were made in the new Welte-Mignon system, perfected in Germany in 1903. How did it work? We really don’t know, since the proprietary process was a closely-guarded secret and the equipment was secured after each session. Apparently, the master was made with ink markings that were then punched as two sets of holes–one for each note and the other for its volume.

The latter was a crucial component which transformed the bland mechanical clanking of the traditional piano roll into a genuine performance which replicated the accents, dynamics and overall atmosphere of the original.

Reproduction is achieved not through a player piano, but with a so-called “vorsetzer” unit, which actually plays a concert grand using felt-tipped “fingers” activated by varying degrees of pneumatic pressure triggered by the sets of holes. The result is uncannily realistic and far superior to the limited range of the acoustic disc in conveying the “touch” of an artist. Except for a slight pumping background sound of the pneumatic bellows, the present disc has the full nuance of a genuine performance. 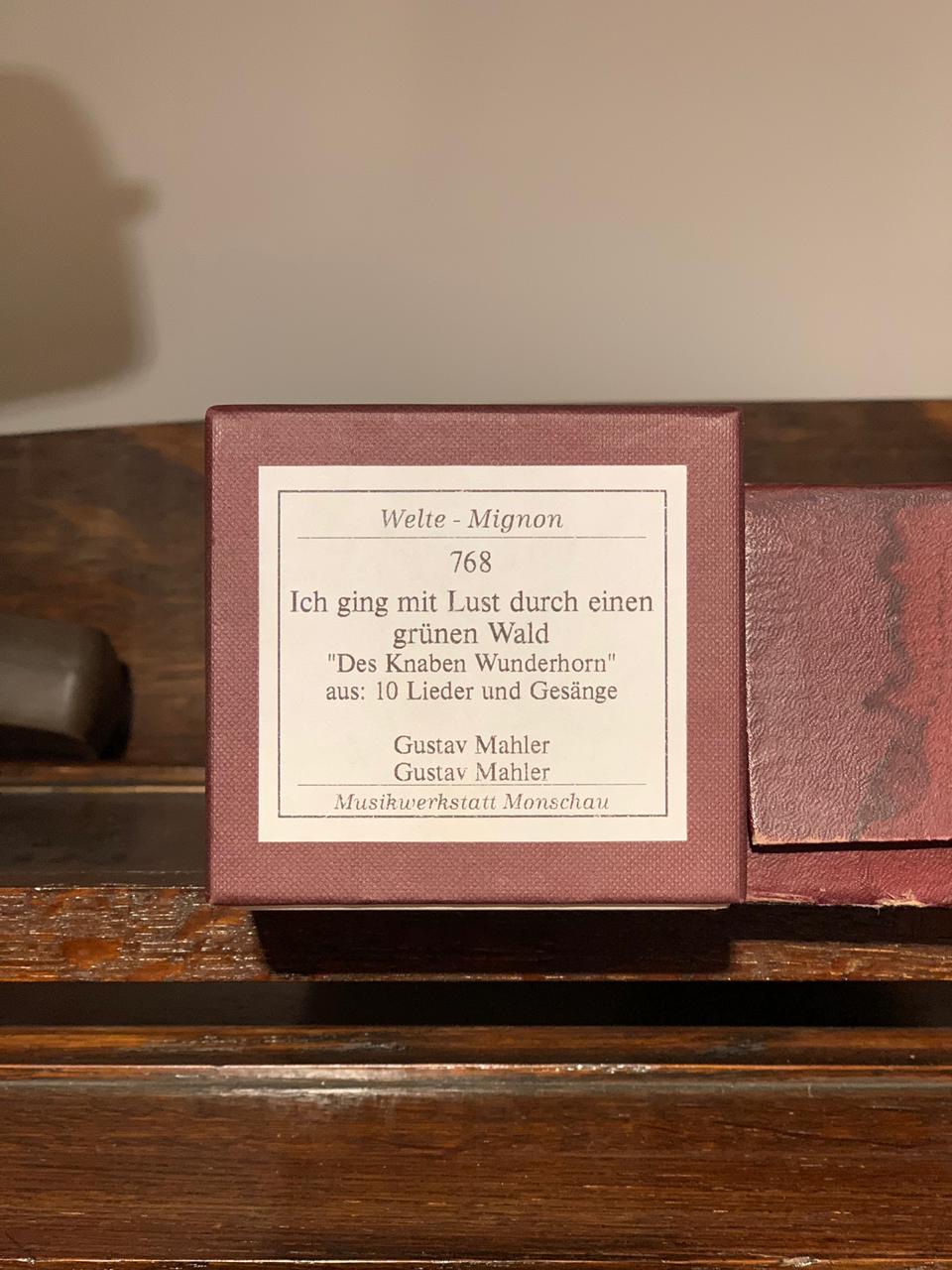 Mahler recorded all four of his rolls in a single session on 09-11-1905. He chose two of his songs, the vocal finale to his Symphony # 4 and the first movement of his Symphony # 5 (which he had completed the previous year), all in arrangements for piano solo. The readings are fast, impulsive and full of highly individual touches, presumably suggesting the manner in which Mahler intended his own works to be interpreted; far more akin to the hysterical passion of Horenstein or Leonard Bernstein (1918-1990) than the cool modern approach of von Karajan or Bernard Haitink (1929).