Son of František (Franz) Chvostek Sr. (1835-1884). Professor in Vienna. Founded modern biology of heredity and the study of genetically inheritable diseases. “Chvostek anaemia” (Chvostek’s symptom, a type of anaemia that accompanies a dysfunction of the pancreas) was named after him.

In May 1911, Chvostek was frequently mentioned in daily reports because, at the request of Alma Mahler-Schindler (already in Paris), he was drawn to the treatment of Gustav Mahler (1860-1911). Chvostek was a determined opponent of women’s studies in Austria, and he also violently enforced this in his lectures.

After the First World War, Chvostek joined Erich Ludendorff’s movement within the nationalist and anti-Semitic movement. The 3th medical clinic was already called “Hakenkreuzlerklinik” in the 1920s, but no membership of Chvostek is known to the NSDAP. During the Nazi era, Chvostek was nominated for the award of the Goethe Medal for Art and Science in 1943 and 1944, referring to his “always national” attitude. 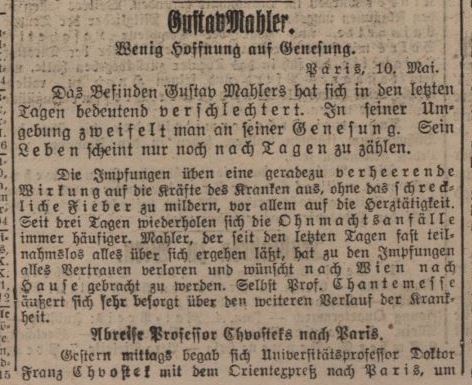