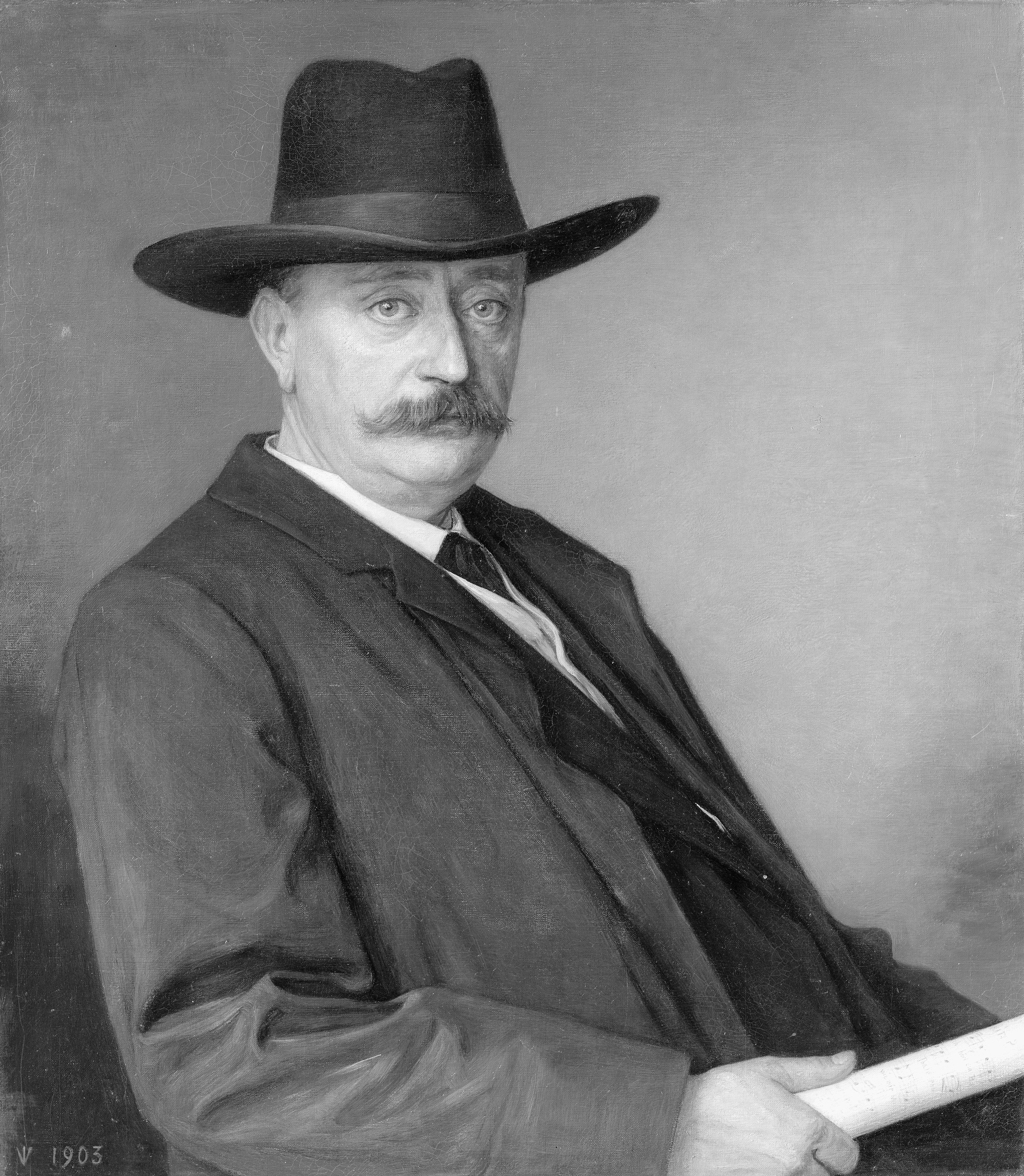 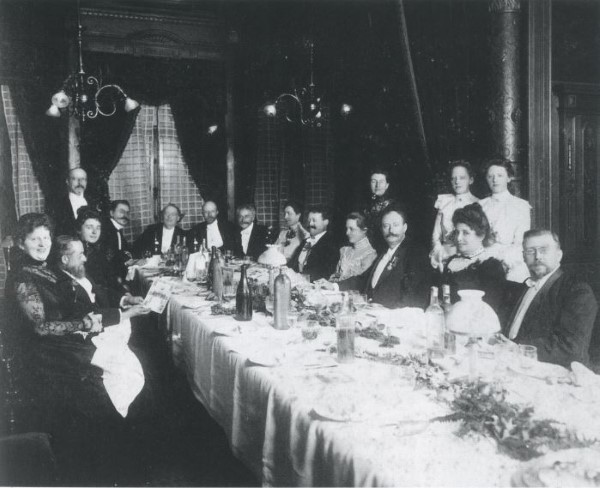 Year 1906. In order not to give his enemies further cause for complaint. Mahler decided that he would accept no invitations to conduct his symphonies until the summer (with the exception of a few excerpts that he intended to perform in Rome during the Easter vacation). His letters to the Dutch baritone Johannes Messchaert show that he had been planning to conduct a concert in Berlin devoted entirely to orchestral songs on the lines of the one he had given in Vienna in 1905. Messchaert was famous throughout Europe for his interpretion of Lieder and oratorios.

Born in Hoorn Holland, he had studied with Julius Stockhausen at the Cologne Rheinische Musikschule, had been active as a choral conductor, and had taught at the Conservatory in Amsterdam. In 1890 he had moved to Wiesbaden and started teaching at the Frankfurt Conservatory. Since then, he had toured Europe, had given highly acclaimed Lieder recitals in all major cities, and had also earned particular fame with parts in oratorios such as Christ in Bach’s St Mailhew Passion. Messchaert was now approaching 50 and his reputation could now only be compared with that of his former teacher, Julius Stockhausen.

If singing is simply the transformation of breathing into sound … then Messchaert is a singer by God s grace, for he possesses this ability to a high degree … Endowed from birth with one of the loveliest voices, his gift of freely and nobly projecting it in all circumstances is the result of study, insight and the dev elopment of taste ..with him word and sound are intimately merged, they permeate each other, each gives the other colour, life and mood. 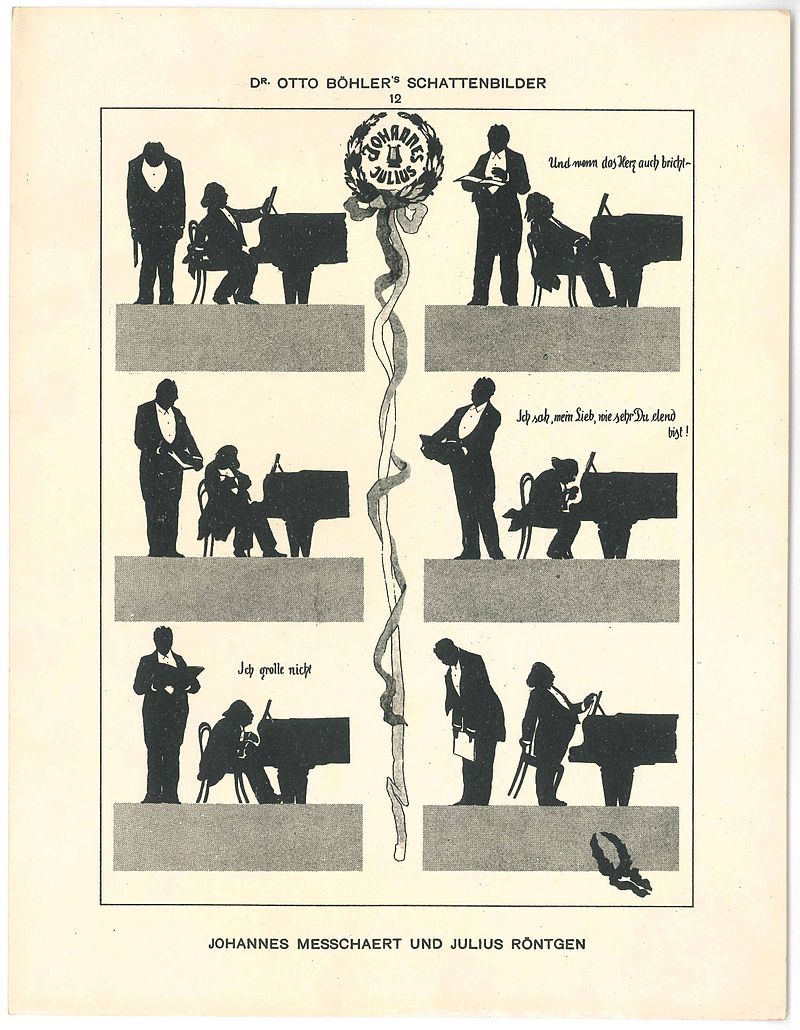 Silhouette depictions of Johannes Messchaert (1857-1922) and Julius Röntgen (at piano).

Such high praise was by no means unusual in contemporary reviews of Messchaert recitals. Thus it is not surprising that Mahler should have agreed to undertake the interminable train journey from Vienna to Berlin, solely to accompany Messchaert s recital of his Lieder. One year earlier, the baritone had given three Lieder recitals in Vienna at the Bosendorfersaal, and the programme of the third, on 18 January 1906, Johanna Messchaert (1857-1922) initially planned to become a violinist. He studied ringing at the Cologne Conservatory and then in Frankfurt and Munich. After leaving Krankfurt in 1911.

He taught at the Hochschule für Musik in Berlin until 1920. He later moved to Zurich, where he taught at the Conservatory until he died. Some of Mahlers letters to Messchaert were published bv Kduard Heeser, others by Rudolph Stephan in Ernst Herttrich and Hans Schneider.

But Mahler’s admiration for Messchaert and enthusiasm for the Berlin project prevailed, since he eventually accepted to travel to Berin in the middle of February, especially for the concert, and to accompany the singer on the piano. He was obviously delighted to have aroused the enthusiasm of such a well-known, respected, and admired artist. He allowed him to make any transpositions he desired, and suggested a programme consisting of five early Wunderhorn-Lieder. The Kindertotenlieder cycle, and a third group consisting of late Wunderhorn-Lieder and the Rlickert-Lieder.

In January in another letter Mahler outlines the definitive programme. In the event there was one minor difference: it contained sixteen songs, whereas Messchaert in fact sang eighteen, for he could not bring himself to perform only the first and third of the Lieder eines fahrenden Gesellen, as Mahler had suggested, and thus sang the whole cycle. Later on Mahler wrote again to call off a planned meeting with Messchaert in Vienna on 26 January, for at that point he was still intending to go on from Frankfurt to Strasbourg. He added that Bruno Walter, ‘who is completely at home in my music, and knows all my wishes, will be at your disposal’.

Mahler was confident that he and Messchaert would reach agreement with regard to rehearsals in Berlin on 12 and 13 February before the recital of the 14th: “Apart from this I shall be happy to comply with whatever special artistic requirements you feel you need. As I shall be at the piano, I can adapt the accompaniment to suit your wishes and disposition. The next letter shows how much Mahler was looking forward to hearing and accompanying Messchaert, for he suggested a rehearsal in Vienna, assuming that he would not have to be at the Opera on the evening in question. For his third recital in Vienna Messchaert had chosen to sing works by Schumann and Mahler that included the Kindertotenlieder.

Mahler was already in Berlin in January and about to conduct his Third Symphony when he received a letter from the Dutch contralto Tilly Koenen, who had sung under him in Amsterdam in March 1906, and whom he had accompanied in a Kaiin concert the following November. She now asked him to accompany the Kindertotenlieder in a recital she was due to give in Vienna. He replied at once, it would be very tempting to hear you sing my songs and to accompany you. However, I simply cannot do this in Vienna, and in the nine years I have lived there I have had to make a point of not doing it in order not to offend sensibilities of numerous kinds. If you need me for this purpose somewhere else I will gladly accede to your request. But it would give me great pleasure to see you when you are in Vienna, and perhaps we could run through one or other of my Lieder.

Mahler suddenly realized that, if he carried out his promise and acted as accompanist for Johannes Messchaert at a concert in Vienna, he might trigger off a series of further requests of that kind. He wrote to him at once:

I very much regret that I must ask you to do without me in Vienna. When you are there I .shall explain to you in person the trivial though important reasons that oblige rne on this occasion (and only in Vienna) to forgo the great pleasure of accompanying you. I will nay only this. If I were to appear with you in public, it would involve me (!) in a hast of personal difficulties, and would offend numerous people (who of couree couldn’t hold a candle to you) very much indeed. As you can imagine, I receive many such requests in Vienna, and I have always refused them on principle. I thought I could make an exception for a unique singer like yourself. However, it has now become clear that by doing so I would make quite a lot of petty little people very angry indeed. And in order to cut this Gordian knot I must ask you to allow me to retract my promise. 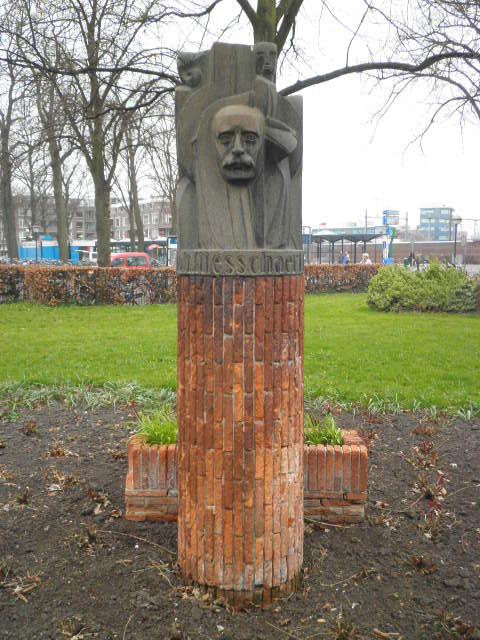 One of the most celebrated vocalists of his day, the Dutch baritone Johannes Martinus Messchaert (1857-1922) enjoyed an illustrious career as a soloist, pedagogue, and choral conductor. (See Plate 24.) It was not as an opera singer that Messchaert made his name but as a singer of lieder and oratorio; above all, his performances of Schubert lieder and his role as Christ in Bach’sSt. Matthew Passionearned him accolades in the German and Dutch press. Having studied with the Frankfurt-based vocal pedagogue Julius Stockhausen, Messchaert went on to collaborate with the pianist Julius Röntgen, with whom he established.