Giacomo Meyerbeer, (born: Jacob Liebmann Beer) was a German opera composer of Jewish birth who has been described as perhaps the most successful stage composer of the nineteenth century. With his 1831 opera Robert le diable and its successors, he gave the genre of grand opera ‘decisive character’. Meyerbeer’s grand opera style was achieved by his merging of German orchestra style with Italian vocal tradition. These were employed in the context of sensational and melodramatic libretti created by Eugène Scribe and were enhanced by the up-to-date theatre technology of the Paris Opéra. They set a standard which helped to maintain Paris as the opera capital of the nineteenth century.

Born to a very wealthy Berlin family, Meyerbeer began his musical career as a pianist but soon decided to devote himself to opera, spending several years in Italy studying and composing. His 1824 opera Il crociato in Egitto was the first to bring him Europe-wide reputation, but it was Robert le diable (1831) which raised his status to great celebrity. His public career, lasting from then until his death, during which he remained a dominating figure in the world of opera, was summarized by his contemporary Hector Berlioz, who claimed that he ‘has not only the luck to be talented, but the talent to be lucky.’ He was at his peak with his operas Les Huguenots (1836) and Le prophète (1849); his last opera (L’Africaine) was performed posthumously. His operas made him the most frequently performed composer at the world’s leading opera houses in the nineteenth century.

At the same time as his successes in Paris, Meyerbeer, as a Prussian Court Kapellmeister (Director of Music) from 1832, and from 1843 as Prussian General Music Director, was also influential in opera in Berlin and throughout Germany. He was an early supporter of Richard Wagner, enabling the first production of the latter’s opera, Rienzi. He was commissioned to write the patriotic opera Ein Feldlager in Schlesien to celebrate the reopening of the Berlin Royal Opera House in 1844 and wrote music for certain Prussian state occasions.

Apart from around 50 songs, Meyerbeer wrote little except for the stage. The critical assaults of Wagner and his supporters, especially after his death, led to a decline in the popularity of his works; his operas were suppressed by the Nazi regime in Germany, and were neglected by opera houses through most of the twentieth century. Meyerbeer’s works are only infrequently performed today.

Meyerbeer died in Paris on 2 May 1864. Rossini, who, not having heard the news, came to his apartment the next day intending to meet him, was shocked and fainted. He was moved to write on the spot a choral tribute (Pleure, pleure, muse sublime!). A special train bore Meyerbeer’s body from the Gare du Nord to Berlin on 6 May, where he was buried in the family vault at the Jewish cemetery in Schönhauser Allee. 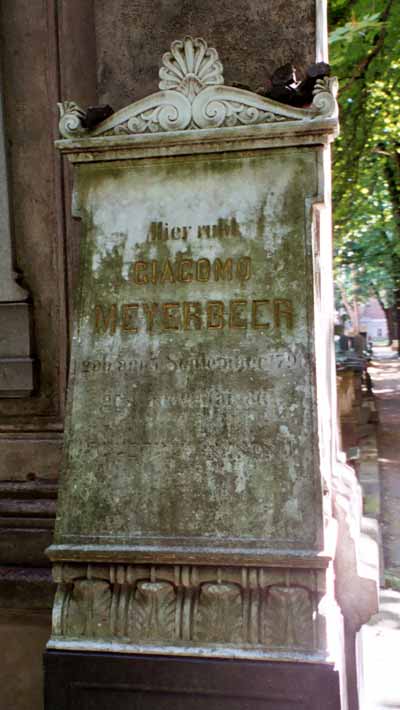