Carl Joachim Friedrich Ludwig von Arnim was a German poet and novelist, and, together with Clemens Brentano and Joseph von Eichendorff, a leading figure of German Romanticism. Arnim was born in Berlin, descending from a Brandenburgian Uradel noble family first mentioned in 1204. His father was the Prussian chamberlain (Kammerherr) Joachim Erdmann von Arnim (1741–1804), royal envoy in Copenhagen and Dresden, later active as the director of the Berlin Court Opera. His mother, Amalia Carlonia Labes (1761–1781), died immediately three weeks after Arnim’s birth.

Arnim and his elder brother Carl Otto spent their childhood with their maternal grandmother Caroline von Labes in Zernikow and in Berlin, where he attended the Joachimsthal Gymnasium. In 1798 he went on to study law, natural science and mathematics at the University of Halle. His early writings included numerous articles for scientific magazines. His first major work, Theorie der elektrischen Erscheinungen (Theory of electrical phenomena) showed a leaning to the supernatural, common among the German romanticists. In Halle he associated with the composer Johann Friedrich Reichardt, in whose house he became acquainted with the Romantic poet Ludwig Tieck.

From 1800 he continued his studies at the University of Göttingen, though, having met Johann Wolfgang von Goethe and Clemens Brentano, he inclined from natural sciences towards literature. Arnim received the degree of a Doctor of Medicine in 1801, but never practiced.

He went on to travel through Europe with his brother from 1801 to 1804. He met his later wife Bettina in Frankfurt, travelled down the Rhine Valley together with Clemens Brentano, visited Germaine de Staël in Coppet, Friedrich Schlegel and his wife Dorothea in Paris, and continued his journey to London and Scotland.

Arnim was influenced by the earlier writings of Goethe and Herder, from which he learned to appreciate the beauties of German traditional legends and folk songs. Back in Germany, he began forming a collection of these and in 1805 first published the result, in collaboration with Clemens Brentano, under the title Des Knaben Wunderhorn. He went to see Goethe in Weimar, in order to edit the collection. In Frankfurt he met with the jurist Friedrich Carl von Savigny, the begin of an enduring friendship.

Arnims’s editorial work was increasingly affected by the Napoleonic Wars. Upon the Prussian defeat in the 1806 Battle of Jena–Auerstedt, he followed the royal court to Königsberg, where he joined the circle of Prussian reformers around Baron vom Stein. In 1807 he moved back to Weimar and Kassel, where he visited the Brothers Grimm, and finally to Heidelberg. He and Brentano completed the second and third volume of their folk song collection and from 1808 together with Joseph Görres published the important romantic Zeitung für Einsiedler (Newspaper for Hermits) in Heidelberg in 1808. The Heidelberg Romanticist circle also included Tieck, Friedrich Schlegel, Jean Paul, Justinus Kerner, and Ludwig Uhland.

From 1809 Arnim again lived in Berlin, however, his plans to enter the Prussian civil service failed. In 1810 he affianced Brentano’s sister Bettina, who won wide recognition as a writer in her own right. Both married on 11 March 1811; their daughter Gisela (one of seven children) became a writer as well. Shortly after their marriage the couple went on to visit Goethe in to Weimar, however, the reunion was overshadowed by a heated quarrel between Bettina and Goethe’s wife Christiane.

In Berlin, Achim worked on Heinrich von Kleist’s legacy and founded the patriotic Deutsche Tischgesellschaft association of Christian men. He remained connected with the Prussian patriots such as Adam Heinrich Müller and Friedrich de la Motte Fouqué and even commanded a Landsturm battalion during the German campaign of 1813. From October 1813 he acted as publisher of the Berlin newspaper “The Prussian Correspondent”, until he fell out with his predecessor Barthold Georg Niebuhr in February 1814.

While his wife stayed in Berlin, Arnim in 1814 retired to his family home in Wiepersdorf, where he lived until his death by a stroke in 1831. His output, published in newspapers, magazines and almanacs as well as self-contained books, included novels, dramas, stories, poems and journalistic works. Following his death, his library was taken over by the Weimar court library.

Des Knaben Wunderhorn: Alte deutsche Lieder (German, lit. The Boy’s Magic Horn: Old German Songs, referring to a hunter’s horn, is a collection of German folk poems and songs edited by Achim von Arnim and Clemens Brentano, and published in Heidelberg, Baden. The book was published in three editions: the first in 1805 followed by two more volumes in 1808.

The collection of love, soldier’s, wandering and children’s songs was an important source of idealized folklore in the Romantic nationalism of the 19th century. Des Knaben Wunderhorn became widely popular across the German-speaking world; Goethe, one of the most influential writers of the time, declared that Des Knaben Wunderhorn “has its place in every household”.

Arnim and Brentano, like other early 19th-century song collectors, such as the Englishman Thomas Percy, freely modified the poems in their collection. The editors, both poets themselves, invented some of their own poems. Some poems were modified to fit poetic meter, to conform to then-modern German spelling, or otherwise to conform more closely to an idealized, Romantic “folk style” (naturpoesie). A 20th-century critical edition by Heinz Rölleke describes the origin of each poem in the collection. Brentano was motivated more by writing his own material than by a strict preservation of the original folk songs.

The young proponents of Romanticism, strongly taken by National sentiments, devoted themselves to the collection and study of the origins of Germanic history in folk songs, fairy-tales, myths, sagas (Nibelung), and Germanic literature. Everything untouched by the negative effects of modern civilization in their eyes, was considered good and helpful for the “Gesundung der Nation” (Recovery of the nation). It was under Brentano’s direction that the Brothers Grimm began collecting their fairytales. 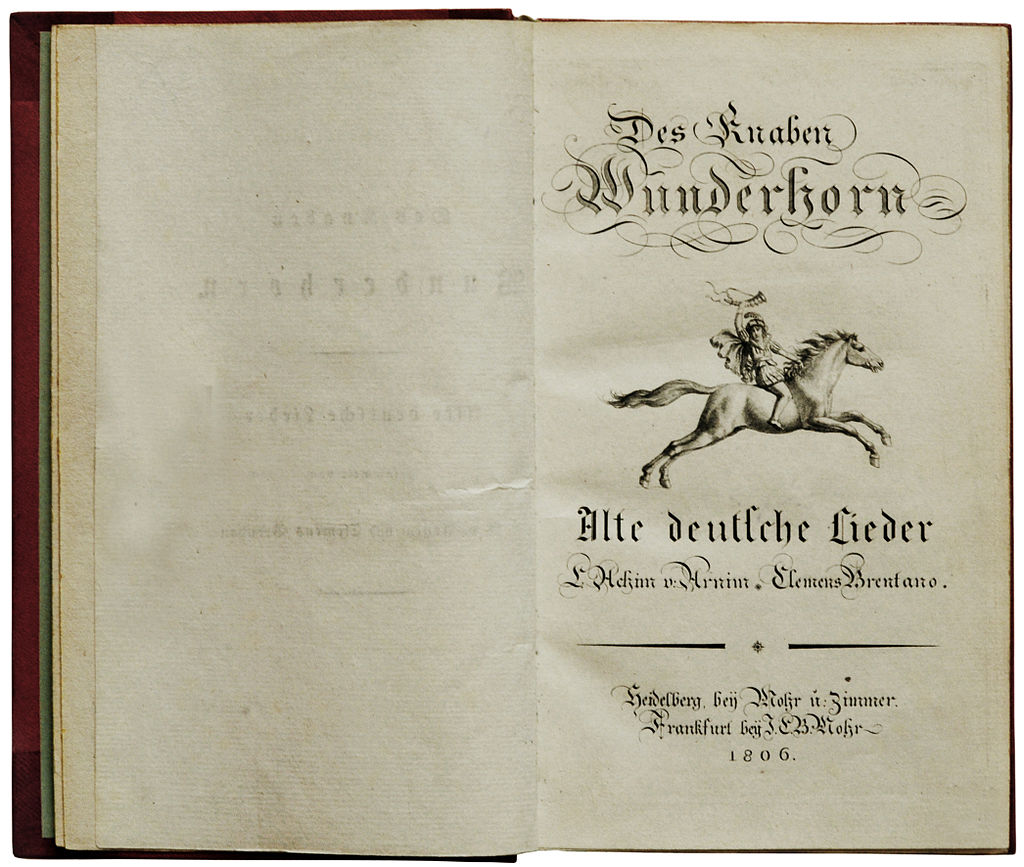 Selected poems from this collection have been set to music (Lieder) by a number of composers, including Mahler, Weber, Loewe, Mendelssohn, Schumann, Brahms, Zemlinsky, Schoenberg, and Webern.

Gustav Mahler numbered the collection among his favourite books and set its poems to music throughout much of his life. The text of the first of his four Lieder eines fahrenden Gesellen, begun in 1884, is based on the Wunderhorn poem Wenn mein Schatz. Between 1887 and 1901, he wrote two dozen settings of Wunderhorn texts, several of which were incorporated into (or composed as movements for) his Second, Third and Fourth symphonies. In 1899, he published a collection of a dozen Wunderhorn settings that has since become known, slightly confusingly, simply as “Songs from ‘Des Knaben Wunderhorn.’” 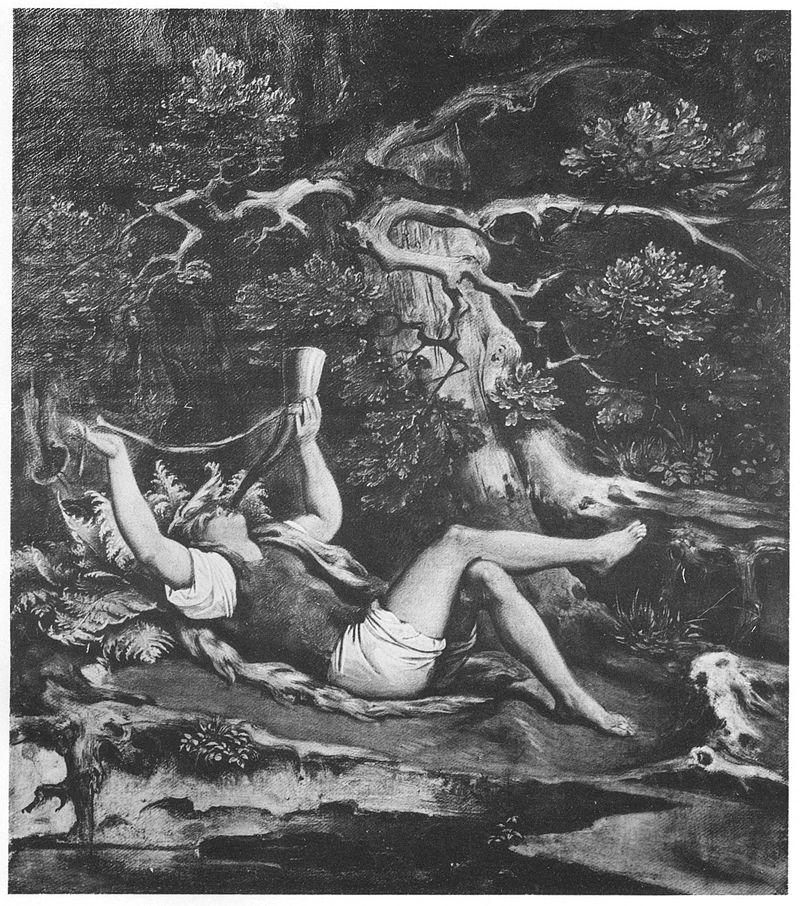