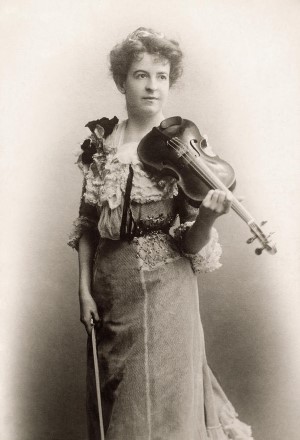 Maud Powell was an American violinist who gained international acclaim for her skill and virtuosity.

Powell was born in Peru, Illinois. She was the first American violinist to achieve international rank. In 1986, Powell’s biographer Karen A. Shaffer founded the Maud Powell Society for Music and Education to further knowledge of Powell and her significant role in music both in the United States and abroad.

Her mother was Wilhelmina “Minnie” Bengelstraeter Powell, and her father was William Bramwell Powell. W.B. Powell authored numerous books such as The Normal Course of Reading and served as superintendent of Peru Elementary School District 124 from 1862 to 1870. She was also the niece of John Wesley Powell, an American Civil War hero and famed explorer of the Grand Canyon. Her uncle made his first scientific exploration of the Colorado River in 1869 when Maud was two years old.

Around the age of 7, she began violin and piano lessons in Aurora, Illinois located in Kane County, Illinois, a western suburb of Chicago, Illinois. She was soon recognized as a prodigy and at age 9 began four years of commuting to Chicago for piano study with Agnes Ingersoll and violin study with William Lewis. When she was 13, her parents sold the family home to raise funds to continue her musical education.

With her father remaining behind in rented rooms, she traveled with her mother and younger brother William to Europe. There she studied under Henry Schradieck at the Leipzig Conservatoire, Charles Dancla at the Paris Conservatoire (after placing first in the entrance exam), and Joseph Joachim (1831-1907) at the Berlin Hochschule, among others.

In 1885 she played Bruch’s G minor concerto in her debut with the Berlin Philharmonic under Joachim’s baton, and again with the New York Philharmonic under Theodore Thomas after she returned to America. She was premiered violin concertos by Tchaikovsky and Sibelius in America and premiered the Dvorak violin concerto in New York under the supervision of Dvorak himself. Powell was a powerful advocate for music by Americans, woman and black composers, including the Afro-English composer Samuel Coleridge-Taylor. Powell was a committed champion of the Jean Sibelius Violin Concerto and played it into the repertoire.

On November 27, 1919 in St. Louis, Missouri, she collapsed on stage of a heart attack. On January 8, 1920 she died of another heart attack in Uniontown, Pennsylvania while on tour.