Max Oppenheimer, also known under the pseudonym “Mopp”, was a landscape, genre, portrait and still life painter. He was also a graphic designer and a writer. From 1900 to 1903, he attended the Vienna Academy of Fine Arts under Christian Griepenkerl and Sigmund L’Allemand, and from 1904 through 1906 he studied under Franz Thiele at the Prague Academy. In 1906 Oppenheimer joined the Prague group ‘OSMA’ (the Eight), one of the first associations of Czech avant-garde artists. 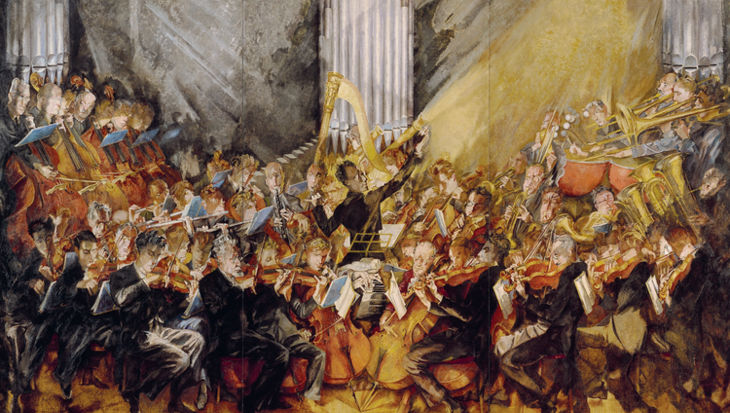 At the time, Oppenheimer’s style revealed a growing interest in Impressionist painting, especially that of Max Liebermann. In 1908, he moved back to Vienna, joining the circle of Oskar Kokoschka and Egon Schiele. His encounter with Kokoschka’s painting exerted a formative influence on Oppenheimer, especially in the field of portraiture which ultimately led to the development of Austrian Expressionist painting.

Existential needs and fears were a dominant theme of their paintings. The three painters influenced each other’s work by varying degrees. In their ‘psychological portraits’, such as Oppenheimer’s painting of the composer Anton Webern (1909), they tried to capture the sitters’ mental characteristics. 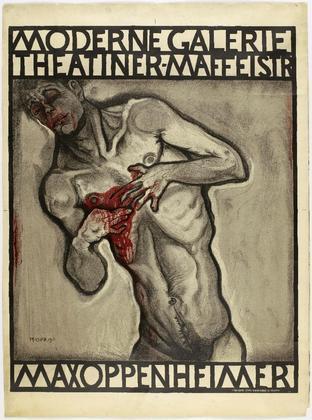 Oppenheimer had his first one-man show at the Moderne Galerie in Munich in 1911. He went on study trips to France, the Netherlands and Italy and lived in Berlin from 1911 to 1915. In 1915, Oppenheimer moved to Switzerland, where he would remain, with interruptions, until 1924. Introduced to Dada in 1916, Oppenheimer participated in the first Dada exhibition in Zurich that year. Dada or Dadaism was a cultural movement that began in Zürich, Switzerland, during World War I and peaked from 1916 to 1922.

The movement primarily involved visual arts, literature poetry, art manifestoes, art theory, theatre, and graphic design, and concentrated its anti-war politics through a rejection of the prevailing standards in art through anti-art cultural works. Its purpose was to ridicule what its participants considered to be the meaninglessness of the modern world. In addition to being anti-war, Dada was also anti-bourgeois and anarchistic in nature. 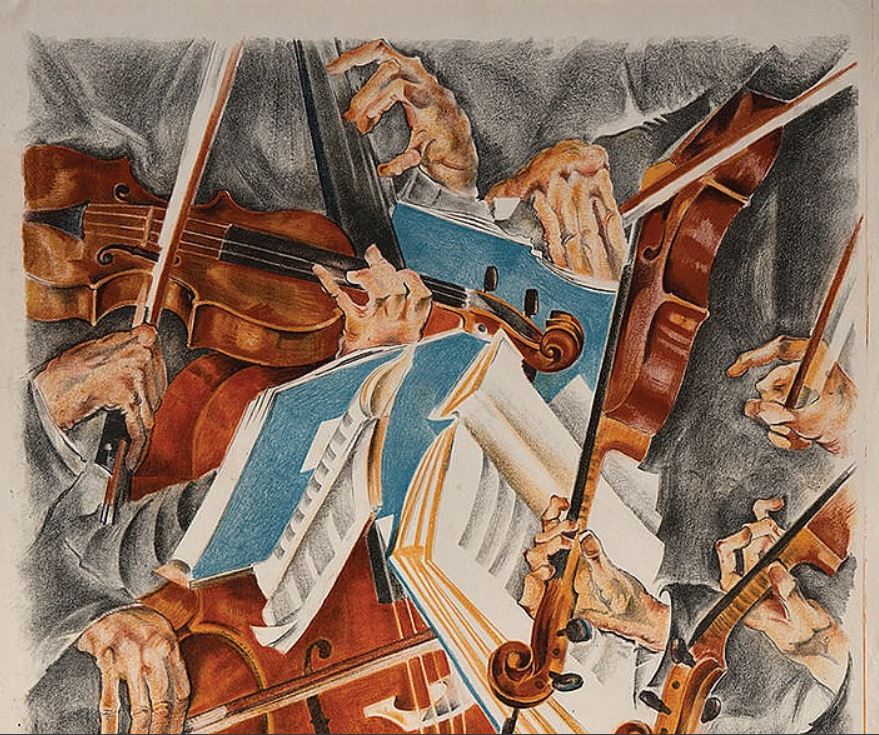 Oppenheimer officially took the name “MOPP” in 1919 although he had signed his pictures with the pseudonym since 1910. He achieved an individual style of portraying the people and atmospheres of the modern city using a mixture of Futurism and Neue Sachlichkeit (“The New Objectivity”).

In 1920 Oppenheimer embarked on his celebrated orchestra scenes, which were primarily the representation of music and composers that were shown in 1924 at a large-scale group exhibition mounted by the Vienna Haagebund. In 1925 he was awarded the Austrian State Prize. 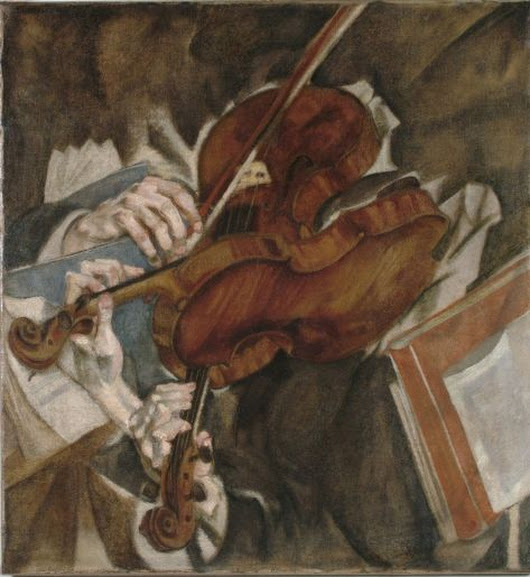 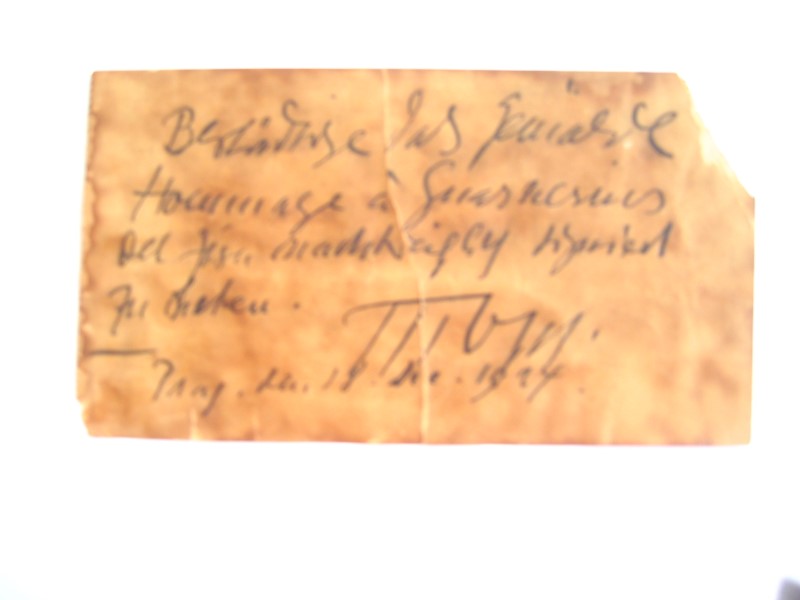 Oppenheimer went to Berlin again in 1926, but by 1931 the increasingly tense political situation in Germany prompted his decision to return to Vienna. In 1932 Oppenheimer participated a last time in a group show at the Vienna Künstlerhaus before fleeing to Switzerland in 1938. In 1939 Oppenheimer emigrated to the US, where his work returned to earlier ideas and then began to explore American Abstract Expressionism.

Max Oppenheimer and Gustav Mahler in the Belvedere Museum, Vienna

To mark the 150th anniversary of Gustav Mahler’s birthday (2010), the series Masterpieces in Focus at the Belvedere Museum is dedicated to the picture Gustav Mahler conducts the Vienna Philharmonic Orchestra by Max Oppenheimer. Mahler’s work as a composer and music opera director exerted a crucial influence on how his contemporaries perceived music, and expressed himself directly in the paintings and sculptures of various artists.

From 1914, the world of music had become the focal point of creativity for the passionate violinist and music expert, which in itself, however, was not so extraordinary. Music gained the attention of many fine artists, at the latest with Richard Wagner. The work Gustav Mahler conducts the Vienna Philarmonic Orchestra was created over a long period from 1935 to 1952, i.e. largely in the Jewish artist’s exile in New York. In its monumental form it is, without doubt, seen as his artistic testament.

The link between music and painting was to become a vital remedy for Oppenheimer while away from home. The long period in which this painting was created can be explained as addressing his cultural identity associated with the hope of a universally understood language of art. Oppenheimer’s other paintings, and a selection of works of his contemporaries will be on show in addition to this monumental work.