Gruber participated as an officer in the Circle, and like many members he was also a participant and officer within the Deutsche Leseverein. He was among the group members who signed the letter to Nietzsche indicating their readiness to dedicate themselves to his ideological vision. In his career as a doctor and researcher, he invented a method for detecting typhoid fever.

Max Gruber wrote that for himself and others of his generation, there was a common bond of painfull adolescent rejection of the values of his parents and the standing political, economic, religious, and cultural structures of the Habsburg Empire. For Gruber, and certainly for other members of the Circle (almost all born in the early 1850’s), this common youthful bond remained a life-long foundation of values and thinking. On his 70th birthday, he made a statement that described an outlook probably common to many members of the Circle:

To realize a noble humanity myself and to help others realize it — that was actually, when I really consider it, always the ultimate aim of my longing. Problems of world view and morality have always concerned me more than all other things. He described himself as having throughout his life a restless despair at the disparity between ideal and reality.

Max von Gruber was an Austrian scientist. As a bacteriologist he discovered specific agglutination in 1896 with his English colleague Herbert Durham (Gruber-Widal-reaction). But his main interests were studying the hygiene and the sexual life.

Max von Gruber was the son of Ignaz Gruber (1803–1872), a general practitioner and the first specialist in otology in Austria, and publisher of a two-volume textbook on medical chemistry (1835). His brother was Franz von Gruber. He graduated from the Schottengymnasium in Vienna and studied medicine at the University of Vienna, receiving his medical doctorate in 1876. He then learned chemistry and physiology under Max von Pettenkofer (1818–1901) and Karl von Voit (1831–1908) in Munich and Karl Ludwig (1816–1895) in Leipzig. Also working under Pettenkofer was Hans Ernst August Buchner (1850–1902), who encouraged Gruber to concentrate on bacteriology.

Unlike some of the great names of the time, among them Carl Wilhelm Nägeli, Theodor Billroth (1829–1894), Ferdinand Cohn (1828–1898), and Robert Koch (1843–1910), Gruber recognized that bacteria possess a variability within limits partially determined by the culture medium. This theory was important for the differentiation of the categories of bacteria and gained significance for Gruber in his examinations of cholera vibrios, enabling him to distinguish them from other vibrios.

In 1882 Gruber was habilitated as a lecturer in Vienna, and two years later he became associate professor and head of the newly established Institute for Hygiene at the University of Graz. On 23 March 1887 he became ausserordentlicher professor in Vienna, succeeding Josef Nowak, and on 10 December 1891 he was appointed to the chair of hygiene established in 1875 at the University of Vienna. Karl Landsteiner became his assistant in 1896.

Another of his pupils, Alois Lode, in 1897 became the first professor in the new chair of hygiene at the University of Innsbruck. The working conditions in the Institute of Hygiene were so poor, that Gruber attempted to resign his chair and find employment as head of a laboratory in München or at the Jenner Institute in London, under Joseph Lister. It was while in Vienna, however, that Gruber, with his English student Herbert Edward Durham (1866–1945), discovered the agglutination which gained him international fame. 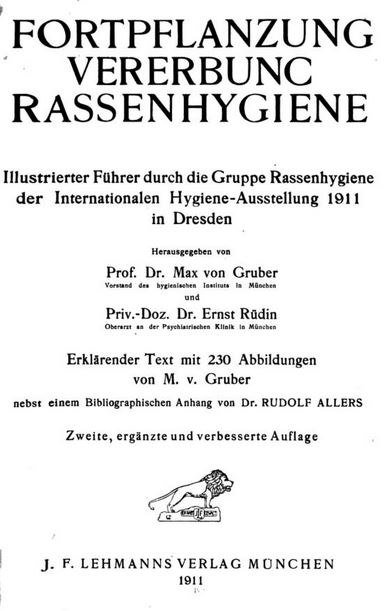 Gruber eventually left Vienna in 1902, and in October that year he succeeded Hans Buchner as director of the Institute for Hygiene in München. He held the post until his voluntary retirement in 1923, on the occasion of his seventieth birthday. In Vienna he was succeeded by Arthur Schattenfroh (1869–1923), who held the chair from 1905 to 1923. During his last years, Gruber concentrated completely on his duties as president of the Bavarian Academy of Sciences.

As a leading racial hygienist, when he first met the Nazi dictator Adolf Hitler he described him as: It was the first time I had seen Hitler close at hand. Face and head of inferior type, cross-breed; low receding forehead, ugly nose, broad cheekbones, little eyes, dark hair. Expression not of a man exercising authority in perfect self-command, but of raving excitement. At the end an expression of satisfied egotism.