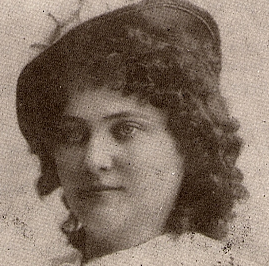 There first performed in 1890, and by 1893 achieved notable successes. Due to the outbreak of the devastating cholera epidemic, Olga was forced to leave Hamburg to Hannover. The Royal Theatre at that time intendant was Lepel Gnitz who immediately hired Olga as opera Subreta and received a modest apartment in Theaterstrasse 15th Olga was a model of the famous German sculptor and painter Bernhard Hoetgeru.

The resulting sculpture for years has been in the family collection Pollakovih, but recently sold at auction in Croatia and now adorns a private collection. Olga’s brilliant career opera singer was cut already in the 30 years of her life, when she married Heinrich Tramm, director, and then naddirektora Hanover. This second Trammov marriage in circles of local aristocrats at first was judged scandalous. Olga 1900, as the first lady of Hannover, established the fund and founded Women’s Club (Frauen-club) who soon with a new committee which was headed, began to gather artists and famous and seen people Hannover.

Olga’s club ensure the use of space in the former residence of her husband. Lavishly equipped them, and then organize charity events, tea parties, literary evenings, concerts and other cultural spectacles in the hall who received and 5,000 people. In fact, Olga’s intention was that the club brings together unmarried women and widows, but he soon became a gathering place for all the ladies, including those from other cities.

Olga was never ashamed of his hometown and the fact that it comes from the province, and one of the most popular events at its gatherings were carnival socializing. Preserved is a detailed description of such a masquerade of 1909 years, which is rife with skits and musical performances. Olga is in such occasions occasionally sang for the audience, to the later years completely stopped.

Heinrich Tramm from the first marriage had a daughter, Olga gave birth to two sons. Unfortunately, after her husband’s death, 13-03-1932 Olga is completely withdrew from public life.

She has worked on the preparation of her husband’s biography “Heinrich Tramm – Stadtdirektor von Hannover 1854 – 1932 Ein Lebensbild”. With the arrival of the Nazis to power in Germany Olga’s life has changed for the worse. Persecuted by the Nazis, she suffered mentally and physically, and died almost completely forgotten, 12-09-1936 years in Hannover. Olga is a lifetime care and fighting for the children, but the youngest son Oskar Tramm (born 1902 years) was killed 1943 in a Nazi prison Berlin-Plötzensee.