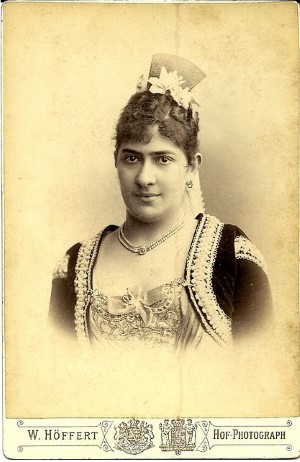 She was born into a highly literate, musical family; her father Ferdinand Andriessen being in the book publishing business, and her mother, Marie Andriessen-von Lingke, being a voice teacher at the Vienna Conservatory. Pelagie’s initial training was with her mother, and her natural range (as is obvious from some of her records) was that of a mezzo-soprano, but she managed to enjoy a career in Germany as a Hochdramatische specializing in Wagnerian roles nonetheless. She began her career as an operetta singer, making her début as Anna in von Suppé’s Flotte Bursche at the Vienna Carl-Theater. She continued her operetta career in Munich, Cologne, Dresden and Nürnberg before her ambitions turned to “grand” opera. Married three times, it was the last lucky man, the bass Paul Greeff (1854-1923), whose name she finally and permanently adopted as her own.

Her operatic début was as Verdi’s Aida in Leipzig in 1884, after she had spent two seasons touring in Angelo Neumann’s company. She stayed at Leipzig until 1890, afterwards appearing at the Cologne and Frankfurt operas, Bayreuth (as Brangäne), Berlin and Salzburg, where she sang the Countess in Mozart’s Le Nozze di Figaro at the Mozart “centenary” festival of 1891. Apparently quite versatile, her repertoire included Santuzza, as well as Meyerbeer’s Valentine and Sélika, and the title role in Gluck’s Armide. In 1892 she ventured away from Germany to London, where she sang Fricka in Das Rheingold and the Die Walküre Brünnhilde at Covent Garden. Here she was indifferently received, supposedly due to comparisons to Rosa Sucher. Her operatic career was pretty much over by the turn of the twentieth century.

Pelagie Greeff-Andriessen possessed a voice of huge volume, frequently rather colorless in the upper ranges, but quite attractive and very expressive in music requiring half-voice or less; her “middle” range was warm and attractive, possibly more so than some of her higher notes. But the voice in general appears to have been quite capable of remaining centered on the music at hand, despite occasional variations from pitch when her ambitions took her slightly higher than nature intended.

She was one of the brave souls who stepped before the acoustic recording horn before it was fashionable to do so, the first series being made at Frankfurt am Main for the Berliner label in 1900 and 1901. These are maddeningly brief excerpts, since they were restricted to 7″ (17 cm) sides, frequently rendered less effective by the enthusiastic but gender-incorrect shouts of “Bravo!” that come at the end, apparently made by the technicians and others present in the studio. On this series, even Brünnhilde’s “Battle Cry” had to be cut; here we get the “Ho-jo-to-hos” only. She re-recorded this selection for G&T in 1907, complete, and it is one of her most impressive discs. There is true joy in this Brünnhilde’s voice, and while she may sound a trifle more “mature” than Wagner intended, a remarkable trill and an over-all enthusiasm makes it clear that Greeff-Andriessen genuinely enjoyed making this recording. Here, as elsewhere, however, she sometimes seems at odds with the accompanist.

Her earliest recordings included a few oddly excerpted passages from Tristan und Isolde. “Den hab’ ich wohl vernommen” takes her beyond her “comfortable range” but the passage beginning “Als für ein fremdes Land” is warm and compelling if one can tune out the accompanist, who seems to take a random hammer to the piano keys, only occasionally checking to see if the chord appears anywhere in the score. The words “attack” and “execution” are frequently used in musical terminology. In Greeff-Andriessen’s approach to Isolde’s “Dein Werk,” the literal meanings of these words are brought vividly to mind.  “Ewig war ich, ewig bin ich” from Siegfried is one of the rare occasions when her high C sounds easy, and a brief “Komm, Hoffnung” from Fidelio is pleasing to the ear. More in keeping with her natural range, she recorded an excerpt from Samson et Dalila, as well as some song titles. Schumann’s “Ich grolle nicht” is amongst the better in the latter category.

Pelagie Greeff-Andriessen’s score or so of recordings are exceptionally rare. Those wanting to hear a small sampling may turn to Symposium’s “Harold Wayne Collection Vol. 35”, although this issue includes only a handful of the earliest (and most brief) recordings.