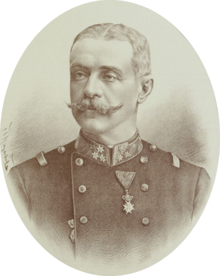 Rudolph (as the spelling of his first name in the court and state manual until 1903) was the second son of Prince Charles of Liechtenstein (1790-1865) and Princess Franziska, nee Countess of Wrbna-Freudenthal (1799-1863). He had eight princely siblings: seven sisters and Karl (* 1827), who since 1865 was head of the Sekundogenitur of the House of Liechtenstein entitled Fürst. With Karl’s death on 16 January 1899 Rudolf took over this position.

Rudolf, who had joined the army after his school-leaving exams, had a quick officer career near the emperor for the time being. In 1892 he was awarded by Franz Joseph I with the Order of the Golden Fleece, the highest Order of the Empire and House Order of the Habsburg-Lorraine dynasty, and received in 1896 from him the k.u. St. Stephen’s Order, the highest ranking order of the Kingdom of Hungary for civil merit.

The position of Obersthofmeister was in Franz Joseph I. by far the highest of the highest Hofchargen in the court; the holder of this function was higher in rank than any other high nobility of the monarchy not belonging to the House of Austria, and was named in the Court and State Manual immediately after the imperial family. It was not just an honorary title, but a demanding leadership position at the interface between the monarch and his family, the political officials, the court officials in the monarch’s residences, and many personalities in the aristocracy, culture, economy, and society of the dual monarchy.

Rudolf, who was personally elected and appointed by the monarch in 1896 as successor to the late Prince Constantine zu Hohenlohe-Schilling’s prince, enjoyed the special confidence of the Emperor and Empress Elisabeth. He was responsible for the administration of imperial castles (including construction works) and for the two Viennese court theaters, the k. k. Hofoper and the k. k. Hofburgtheater, responsible and to the appointment of the directors (as Gustav Mahler 1897) significantly involved. One of the outstanding events he had to deal with in 1897 was the Badeni riots in Vienna over the language dispute between Czechs and Germans in Bohemia, 1898 the murder of Empress Elisabeth on 10 September, and the 50th anniversary of the emperor’s throne December 2, 1900, the family crisis over the morganatic marriage of Archduke Franz Ferdinand with his oath of renunciation in the Vienna Hofburg on 28 June and 1903 the state visits of King Edward VII (31 August-3 September), the German emperor Wilhelm II (18-20 September) and of Czar Nicholas II (30 September-3 October) in Vienna.

In his last years Rudolf was often sick due to illness. He was represented by Furst Alfred von Montenuevo (1854-1927) as Second Supreme Court Master; After Rudolf’s death, Montenuovo followed suit.

Rudolf set to music as composer texts by Walther von der Vogelweide and Heinrich Heine. For Empress Elisabeth he was supposedly the beautiful prince.

The well-respected Liechtenstein family did not live in the sovereign but small principality of Liechtenstein at that time, but especially in Vienna and Moravia, where they possessed castles and extensive estates.