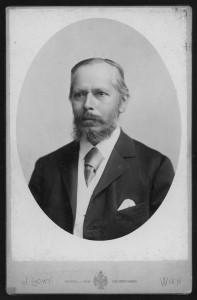 August Freiherr Plappart von Leenheer (1836-1907) was from 1898 Mahler’s immediate superior in the transmission of the Vienna Hofoper administration. Little was known about his person, his relationship to Mahler is generally described in the literature as critical. In the course of researching the book “Mahlers Menschen. Friend and companion “of Helmut Brenner and Reinhold Kubik, the great-grandson of Plapparts was found, who possesses a number of important documents, among them 7 previously unknown writings by Gustav Mahler to Plappart. They are published for the first time in this commemorative volume – in honor of Henry-Louis de La Grange.

In Mahler’s literature, Hoftheater-intendant Plappart is shunned as an unimaginative bureaucrat, who made life difficult for Gustav Mahler, although little is known about him.1 After new archive finds, this image must be corrected.