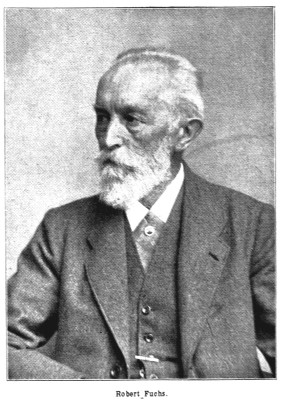 Robert Fuchs was an Austrian composer and music teacher. As Professor of music theory at the Vienna Conservatory, Fuchs taught many notable composers, while he was himself a highly regarded composer in his lifetime.

He the youngest of thirteen children. He studied at the Vienna Conservatory with Felix Otto Dessoff and Joseph Hellmesberger among others. He eventually secured a teaching position there and was appointed Professor of music theory in 1875. He retained the position until 1912.

Brother of Johann Nepomuk Fuchs (1842-1899), who was also a composer and an opera conductor.

“Unfailingly tuneful and enjoyable, Robert Fuchs’s piano trios are an easily accessible way to get to know a composer whom Brahms greatly admired,” noted the magazine Gramophone. “In his time Fuchs was very highly regarded, with one critic famously pointing to Fuchsisms in Mahler’s Second Symphony.”

The reason his compositions did not become better known was largely that he did little to promote them, living a quiet life in Vienna and refusing to arrange concerts, even when the opportunities arose. He certainly had his admirers, among them Brahms, who almost never praised the works of other composers. But with regard to Fuchs, Brahms wrote, “Fuchs is a splendid musician, everything is so fine and so skillful, so charmingly invented, that one is always pleased.” Famous contemporary conductors, including Arthur Nikisch, Felix Weingartner and Hans Richter, championed his works when they had the opportunity but with few exceptions, it was his chamber music which was considered his finest work.

In his lifetime, his best known works were his five serenades; their popularity was so great that Fuchs acquired the nickname “Serenaden-Fuchs” (roughly, “Serenader Fox”). The serenades have been recorded by the Cologne Chamber Orchestra under Christian Ludwig for Naxos.