Schreker was born in Monaco, the eldest son of the Bohemian Jewish court photographer Ignaz Schrecker, and his wife, Eleonore von Clossmann, who was a member of the Catholic aristocracy of Styria. He grew up during travels across half of Europe and, after the early death of his father, the family moved from Linz to Vienna (1888) where in 1892, with the help of a scholarship, Schreker entered the Vienna Conservatory. Starting with violin studies, with Sigismund Bachrich and Arnold Josef Rose (1863-1946), he moved into the composition class of Robert Fuchs (1847-1927) (also teacher of Gustav Mahler (1860-1911)), graduating as a composer in 1900.

His first success was with the Intermezzo for strings, Op. 8, which won an important prize sponsored by the Neue musikalische Presse in 1901. After graduating from the conservatory he spent several years taking various bread-and-butter jobs. His first opera, Flammen, was completed in 1902 but failed to receive a staged production.

Schreker had begun conducting in 1895, when he had founded the Verein der Musikfreunde Döbling. In 1907 he formed the Vienna Philharmonic Chorus, which he conducted until 1920: among its many premières were Alexander von Zemlinsky (1871-1942)‘s Psalm XXIII and Arnold Schoenberg (1874-1951)‘s Friede auf Erden and Gurre-Lieder.

His “pantomime”, Der Geburtstag der Infantin, commissioned by the dancer Grete Wiesenthal (1885-1970) and her sister Elsa for the opening of the 1908 Kunstschau, first called attention to his development as a composer. Such was the success of the venture that Schreker composed several more dance-related works for the two sisters including Der Wind, Valse lente and Ein Tanzspiel (Rokoko).

November 1909 saw the stormy premiere of the complex orchestral interlude (entitled Nachtstück) from Der ferne Klang, the opera he had been working on since 1903. In 1912, the first performance of the complete opera in Frankfurt consolidated his fame. In the same year, director Wihelm Bopp offered Schreker a provisional teaching appointment at the Conservatory where Schreker had studied, now the Vienna Music Academy. In early 1913 he was appointed full professor. 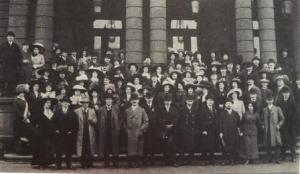 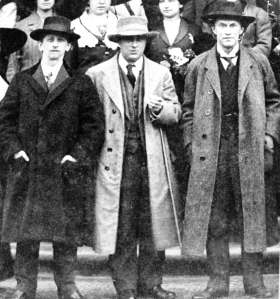 This breakthrough heralds a decade of great success for the composer. His next opera, Das Spielwerk und die Prinzessin, which was given simultaneous premières in Frankfurt and Vienna on 15 March 1913 was less well received (the work was subsequently revised as a one-act ‘Mysterium’ entitled simply Das Spielwerk in 1915), but the scandal caused by this opera in Vienna only served to make Schreker’s name more widely known.

The outbreak of World War I interrupted the composer’s success but with the première of his opera Die Gezeichneten, in Frankfurt on 25 April 1918, Schreker moved to the front ranks of contemporary opera composers. The first performance of Der Schatzgräber in Frankfurt on 21 January 1920 was the high point of his career. The Chamber Symphony, composed between the two operas for the faculty of the Vienna Academy in 1916, quickly entered the repertoire and remains Schreker’s most frequently performed work today.

In March 1920 he was appointed director of the Hochschule für Musik in Berlin and between 1920 and 1932 he gave extensive musical tuition in a variety of subjects with Berthold Goldschmidt, Alois Hába, Jascha Horenstein, Julius Bürger, Ernst Krenek (1900-1991), Artur Rodzinski, Stefan Wolpe, Zdenka Ticharich and Grete von Zieritz numbering among his students.

Schreker’s fame and influence were at their peak during the early years of the Weimar Republic when he was the most performed living opera composer after Richard Strauss (1864-1949). The decline of his artistic fortunes began with the mixed reception given to Irrelohe in Cologne in 1924 under Otto Klemperer (1885-1973) and the failure of Der singende Teufel, given in Berlin in 1928 under Erich Kleiber.

Political developments and the spread of anti-Semitism were also contributory factors, both of which heralded the end of Schreker’s career. Right-wing demonstrations marred the première of Der Schmied von Gent in Berlin in 1932 and National Socialist pressure forced the cancellation of the scheduled Freiburg première of Christophorus in 1933 (the work was finally performed there in 1978). Finally, in June 1932, Schreker lost his position as Director of the Musikhochschule in Berlin and, the following year, also his post as professor of composition at the Akademie der Künste.

In his lifetime he went from being hailed as the future of German opera to being considered irrelevant as a composer and marginalized as an educator. After suffering from a stroke in December 1933, he died in Berlin on 21 March 1934, two days before his 56th birthday.

Although Schreker was influenced by composers such as Richard Strauss (1864-1949) and Richard Wagner (1813-1883), his mature style shows a highly individual harmonic language, which, although broadly tonal, is inflected with chromatic and polytonal passages.

After decades in obscurity, Schreker has begun to enjoy a considerable revival in reputation in the German-speaking world and in the United States. In 2005 the Salzburg Festival mounted an incomplete production of Die Gezeichneten, conducted by Kent Nagano (and filmed), and the Jewish Museum in Vienna presented an exhibition devoted to his life and work. New productions of Der ferne Klang were staged at the Staatsoper Unter den Linden in Berlin and the Zurich Opera in 2010, as well as in smaller opera houses in Germany. Irrelohe was performed at the Volksoper in Vienna in 2004 and again at the Bonn Opera in November 2010. Earlier that year a Schreker opera was staged in the USA for the first time: Die Gezeichneten at Los Angeles Opera; and months after that came a second: Der ferne Klang during the Bard Summerscape Festival.