Simon Reinink grew up at the Linschoten estate. So he worked when he was young on farms on the estate. When he was 10, he also had the idea of becoming a farmer. His uncle advised him to have a good education anyway. Reinink was passionate about art and culture: his father was a professor of art history and his mother was an artist. The estate has now been merged into a foundation of which Reinink is chairman.

During the atheneum school Simon Reinink discovered his talents and interests. After this he made the choice to study law in Utrecht. He also studied musicology for a year. Reinink had a very active student life. Initially he went to student association C.S. Veritas, but he switched to the Utrecht Student Corps (USC). This turned out to be a golden move, because in the last year of his study he became rector of the corps during the lustrum year of USC. In this he learned a lot about business management and sponsoring, things that also play a major role in his current job as director of the concert hall.

When Reinink completed his law degree, he decided that the legal profession would be a good basis for his career. However, he already considered and aspired to a job as director in the cultural sector. He spoke about this with the then director of Het Concertgebouw: Martijn Sanders. He advised him to gain experience in business. But first Reinink ran his lawyer’s traineeship. He did this at De Brauw Blackstone.

After this, he wanted to take the step to the business world and therefore took a different route: he started working for publishing company Wolters Kluwer. Here he had various management positions and thus started his line management career. After eight years he kept it up, but he remained in the publishing world. In 2004 he became Director-Publisher at ThiemeMeleunhoff. Two years later Reinink was nominated by a commissioner he knew for the longlist of the position of General Director of Het Concertgebouw. He got that job. Reinink followed ‘icon’ Martijn Sanders. Sanders was the managing director of Het Concertgebouw for a quarter of a century.

Reinink loved music a lot when he was young. In addition to his parents taking him to the Concertgebouw from an early age, he also played an instrument himself: guitar. His teacher and brother, who is a musicologist, thought he was good enough to go to the conservatory, but Reinink himself had his doubts about that.

As mentioned, he studied law and then ended up in the publishing industry. Thanks to his current job, he eventually ended up in the music world. He goes to a concert three times a week. Because of his work he often makes long days and he has little time for other things. Simon Reinink is married at the time of writing, in 2014, and father of two children aged twelve and fourteen. For his work he moved from Utrecht to Amsterdam.

11-2016: Article in the programme guide ‘Preludium’ of the Amsterdam Royal Concertgebouw Orchestra (RCO) 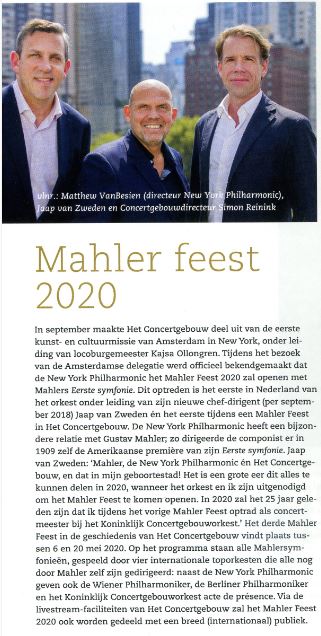 Through livestream the Mahler Festival 2020 Amsterdam will be shared with a broad (international) audience. Link livestream.