In 1895, the brothers Sumpf rebuilt the already first mentioned in 1861 Brewery Losch on the harbor road in Kassel. Through the merger of the Kassel breweries E. Wentzell and the Losch brewery Gebr. Marsh with the Greifswalder brewery August Sumpf sons in 1897, the Hercules Brewery was founded with a subsidiary of the same name in Greifswald. The naming recurred to the landmark of Kassel – the Hercules building located at an altitude of 580 meters.

After taking over the Schiebeler brewery in 1898 and the “Hessian-Actien-Bierbrauerei” – founded in 1872 as the first joint stock company in the Kassel area and their beer because of their taste and the form of society in the vernacular “Dividendenjauche” called – the brewery 1912 in “Hessian and Herkules-Bierbrauerei AG “renamed.

After decommissioning of the Hessian company brewery and the concentration of brewing on the Hercules Brewery on the harbor road, the need for double name designation was omitted, so that since 1921 the name Herkules Brewery became common. 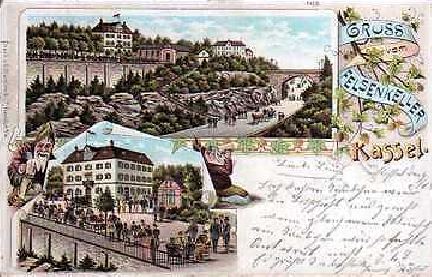 The brewery, which emerged in 1912 from the merger of Herkules and the Hessian Actien brewery Wehlheiden, closed in 1972 – after years of cooperation – with the Binding brewery. The brewing tradition came to an end in 1999 after the decision of Binding AG.

Herkules bierbrewery at the Karlsplatz

The large corner building Karlsplatz 1-2 / Obere Karlsstraße 18 is closely linked to the bourgeois history of Kassel. Erected by the manufactory owners Landré after 1714, master tailor Hermann Meyer took over the building complex in 1839; around 1860 he was bought by the brewer Sebastian Losch and set up the restaurant “Zum Carlsplatz”. The beer was then preferably cooled in cellars, which had been driven in the vineyard or on the Kölnische Straße in the rocks; The required ice cut in winter from the Fulda.

Losch had his beer cellar from 1860 on the present property Kölnische Straße 112 create. Later he also ran the popular garden bar “Stadtpark” (Wilhelmsstraße 6, see station 18). In 1885, the Brothers Sumpf took over the house on Karlsplatz and became partners in the brewery, which they continued alone after Losch’s death in 1887. In 1897 they merged with the breweries Wentzell (Gasthaus zur Pinne) and August Sumpf Söhne (in Greifswald): The Hercules Brewery was established, based in the Hafenstraße. 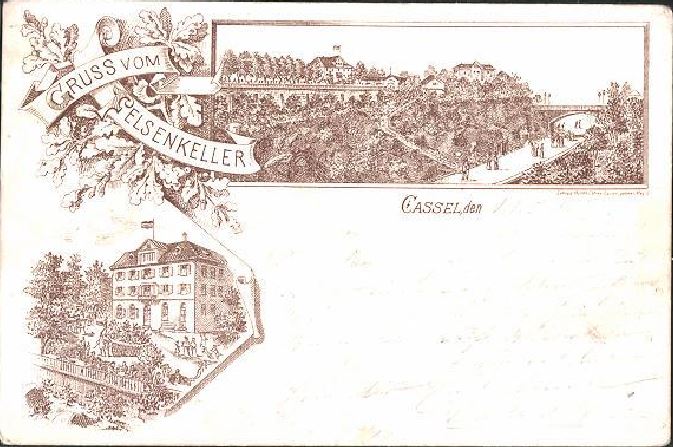 In 1925 and 1926, the Karlsplatz complex was acquired by the Special Local Health Insurance Fund, in 1936 by the City of Kassel and the GWG; now moved here several municipal offices, the restaurant persisted. After the Second World War, the area was initially vacant; instead of the row of houses on the Karlsstraße today rises the south wing of the town hall. – The Hercules Brewery was incorporated in 1972 Binding AG and 1999 closed. 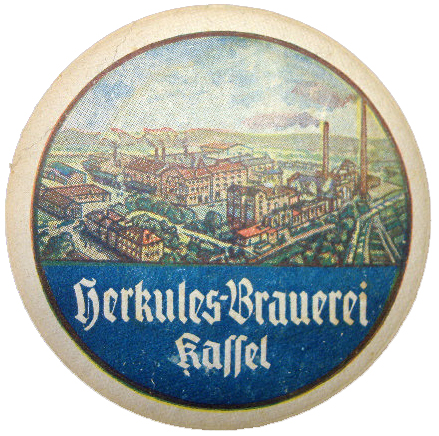 The wing of the building on Karlsstraße took up the motif of the three-winged house, but the top floor was from the outset constructed as a single storey (without gaps between the gables). The wall on the right belongs to the Rathaushof; the earlier building from the 18th century had been demolished in 1904 for the construction of the town hall.