The Royal Opera House (ROH) is an opera house and major performing arts venue in Covent Garden, central London. The large building is often referred to as simply “Covent Garden”, after a previous use of the site of the opera house’s original construction in 1732. It is the home of The Royal Opera, The Royal Ballet, and the Orchestra of the Royal Opera House. Originally called the Theatre Royal, it served primarily as a playhouse for the first hundred years of its history. In 1734, the first ballet was presented. A year later, Handel’s first season of operas began. Many of his operas and oratorios were specifically written for Covent Garden and had their premieres there.

The current building is the third theatre on the site following disastrous fires in 1808 and 1856. The façade, foyer, and auditorium date from 1858, but almost every other element of the present complex dates from an extensive reconstruction in the 1990s. The main auditorium seats 2,256 people, making it the third largest in London, and consists of four tiers of boxes and balconies and the amphitheatre gallery. The proscenium is 12.20 m wide and 14.80 m high. The main auditorium is a Grade I listed building.

In 1728, John Rich, actor-manager of the Duke’s Company at Lincoln’s Inn Fields Theatre, commissioned The Beggar’s Opera from John Gay. The success of this venture provided him with the capital to build the Theatre Royal (designed by Edward Shepherd) at the site of an ancient convent garden, part of which had been developed by Inigo Jones in the 1630s with a piazza and church. In addition, a Royal Charter had created a fruit and vegetable market in the area, a market which survived in that location until 1974. At its opening on 7 December 1732, Rich was carried by his actors in processional triumph into the theatre for its opening production of William Congreve’s The Way of the World.

During the first hundred years or so of its history, the theatre was primarily a playhouse, with the Letters Patent granted by Charles II giving Covent Garden and Theatre Royal, Drury Lane exclusive rights to present spoken drama in London. Despite the frequent interchangeability between the Covent Garden and Drury Lane companies, competition was intense, often presenting the same plays at the same time. Rich introduced pantomime to the repertoire, himself performing (under the stage name John Lun, as Harlequin) and a tradition of seasonal pantomime continued at the modern theatre, until 1939.

In 1734, Covent Garden presented its first ballet, Pygmalion. Marie Sallé discarded tradition and her corset and danced in diaphanous robes. George Frideric Handel was named musical director of the company, at Lincoln’s Inn Fields, in 1719, but his first season of opera, at Covent Garden, was not presented until 1734. His first opera was Il pastor fido followed by Ariodante (1735), the première of Alcina, and Atalanta the following year. There was a royal performance of Messiah in 1743, which was a success and began a tradition of Lenten oratorio performances. From 1735 until his death in 1759 he gave regular seasons there, and many of his operas and oratorios were written for Covent Garden or had their first London performances there. He bequeathed his organ to John Rich, and it was placed in a prominent position on the stage, but was among many valuable items lost in a fire that destroyed the theatre on 20 September 1808. In 1792 the architect Henry Holland rebuilt the auditorium, within the existing shell of the building but deeper and wider than the old auditorium, thus increasing capacity.

Rebuilding began in December 1808, and the second Theatre Royal, Covent Garden (designed by Robert Smirke) opened on 18 September 1809 with a performance of Macbeth followed by a musical entertainment called The Quaker. The actor-manager John Philip Kemble, raised seat prices to help recoup the cost of rebuilding and the cost of an increased ground rent introduced by the landowner, the Duke of Bedford, but the move was so unpopular that audiences disrupted performances by beating sticks, hissing, booing and dancing. The Old Price Riots lasted over two months, and the management was finally forced to accede to the audience’s demands.

During this time, entertainments were varied; opera and ballet were presented, but not exclusively. Kemble engaged a variety of acts, including the child performer Master Betty; the great clown Joseph Grimaldi made his name at Covent Garden. Many famous actors of the day appeared at the theatre, including the tragediennes Sarah Siddons and Eliza O’Neill, the Shakespearean actors William Charles Macready, Edmund Kean and his son Charles. On 25 March 1833 Edmund Kean collapsed on stage while playing Othello, and died two months later.

In 1806, the pantomime clown Joseph Grimaldi (The Garrick of Clowns) had performed his greatest success in Harlequin and Mother Goose; or the Golden Egg at Covent Garden, and this was subsequently revived, at the new theatre. Grimaldi was an innovator: his performance as Joey introduced the clown to the world, building on the existing role of Harlequin derived from the Commedia dell’arte. His father had been ballet-master at Drury Lane, and his physical comedy, his ability to invent visual tricks and buffoonery, and his ability to poke fun at the audience were extraordinary.

Early pantomimes were performed as mimes accompanied by music, but as Music hall became popular, Grimaldi introduced the pantomime dame to the theatre and was responsible for the tradition of audience singing. By 1821 dance and clowning had taken such a physical toll on Grimaldi that he could barely walk, and he retired from the theatre. By 1828, he was penniless, and Covent Garden held a benefit concert for him.

In 1817, bare flame gaslight had replaced the former candles and oil lamps that lighted the Covent Garden stage. This was an improvement, but in 1837 Macready employed limelight in the theatre for the first time, during a performance of a pantomime, Peeping Tom of Coventry. Limelight used a block of quicklime heated by an oxygen and hydrogen flame. This allowed the use of spotlights to highlight performers on the stage.

The Theatres Act 1843 broke the patent theatres’ monopoly of drama. At that time Her Majesty’s Theatre in the Haymarket was the main centre of ballet and opera but after a dispute with the management in 1846 Michael Costa, conductor at Her Majesty’s, transferred his allegiance to Covent Garden, bringing most of the company with him. The auditorium was completely remodelled and the theatre reopened as the Royal Italian Opera on 6 April 1847 with a performance of Rossini’s Semiramide.

In 1852, Louis Antoine Jullien the French eccentric composer of light music and conductor presented an opera of his own composition, Pietro il Grande. Five performances were given of the ‘spectacular’, including live horses on the stage and very loud music. Critics considered it a complete failure and Jullien was ruined and fled to America. Costa and his successors presented all operas in Italian, even those originally written in French, German or English.

On 5 March 1856, the theatre was again destroyed by fire. Work on the third theatre, designed by Edward Middleton Barry, started in 1857 and the new building, which still remains as the nucleus of the present theatre, was built by Lucas Brothers and opened on 15 May 1858 with a performance of Meyerbeer’s Les Huguenots.

1892. London. Royal Opera House Covent Garden. The building on the left is a flower market. 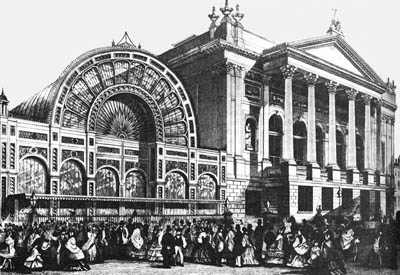 The theatre became the Royal Opera House (ROH) in 1892, and the number of French and German works offered increased. Winter and summer seasons of opera and ballet were given, and the building was also used for pantomime, recitals and political meetings. In 1892 Gustav Mahler (1860-1911) presented the debut of Wagner’s Ring cycle. The word “Italian” was then quietly dropped from the name of the opera house. 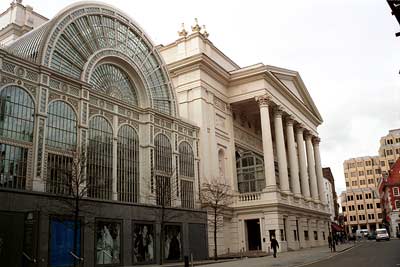 During the First World War, the theatre was requisitioned by the Ministry of Works for use as a furniture repository. From 1934 to 1936, Geoffrey Toye was Managing Director, working alongside the Artistic Director, Sir Thomas Beecham. Despite early successes, Toye and Beecham eventually fell out, and Toye resigned. 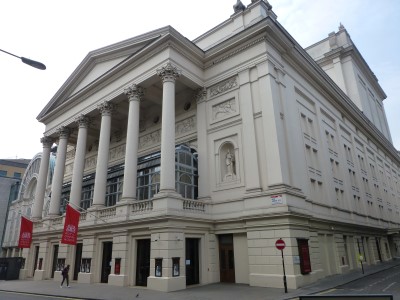 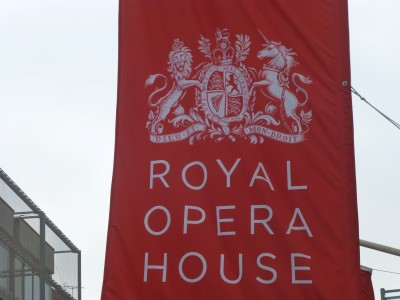 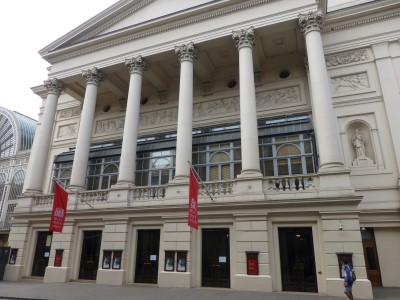 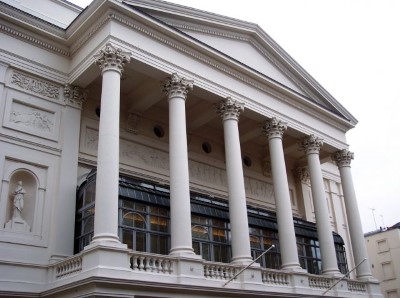 During the Second World War the ROH became a dance hall. There was a possibility that it would remain so after the war but, following lengthy negotiations, the music publishers Boosey & Hawkes acquired the lease of the building. David Webster was appointed General Administrator, and Sadler’s Wells Ballet was invited to become the resident ballet company. The Covent Garden Opera Trust was created and laid out plans “to establish Covent Garden as the national centre of opera and ballet, employing British artists in all departments, wherever that is consistent with the maintenance of the best possible standards …”

The Royal Opera House reopened on 20 February 1946 with a performance of The Sleeping Beauty in an extravagant new production designed by Oliver Messel. Webster, with his music director Karl Rankl, immediately began to build a resident company. 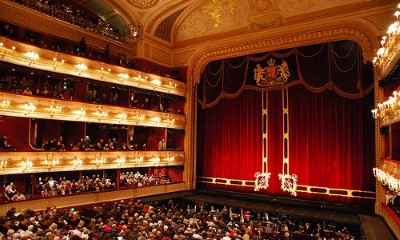 In December 1946, they shared their first production, Purcell’s The Fairy-Queen, with the ballet company. On 14 January 1947, the Covent Garden Opera Company gave its first performance of Bizet’s Carmen. Before the grand opening, the Royal Opera House presented one of the Robert Mayer Children’s concerts on Saturday, 9 February 1946. 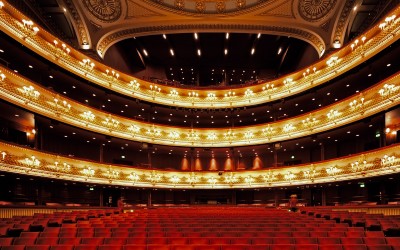