The café was the southern corner building at the confluence of the Grimmaische Strasse on the Augustusplatz. It had a prestigious location on the largest square in the city. It stood next to the former Paulinerkirche, a few meters away from it, and had a clear view of the square with the surrounding buildings of the New Theater, the Post Office and the Picture Museum.

In 1821, the Leipzig confectioner Wilhelm Felsche began with the production and distribution of chocolate. The business evidently developed so well that he was able to acquire the site between the 1831 demolished Grimmaischen Tor and Paulinerkirche from the university to build a coffee house there. On the site was still the old debt tower, whose massive construction in the demolition revealed so much to sell construction material that a good part of the land purchase could be denied. 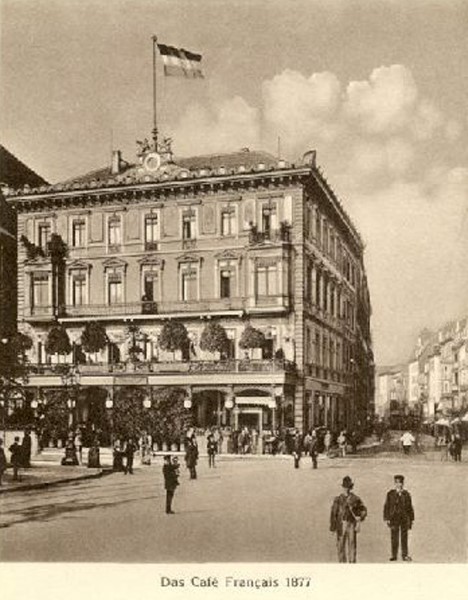 On October 3, 1835 opened on the ground floor and first floor of the four-storey building, the Café Français with attached sales room. The name was as far as program, as Felsche wanted to offer the Leipzigers what he had experienced during his stay in Paris in cafes to luxury. He turned the café into a coffeehouse of the first order, in which the elegant world frequented, but not artists and writers. The intended selection of the audience was among other things expressed in the fact that for the inspection of a Christmas exhibition 1835 four groschen entrance (as consumption voucher) were demanded. The certain detachment was the house several times fatal. In November 1848 it was devastated in connection with the execution of Robert Blum in Vienna, stormed on 4 July 1923 by starving women and men and put on 18 October 1925 even on fire.

Already in 1839 a gas lighting was installed in the house and a covered terrace was added. As the premises were soon no longer sufficient for the chocolate production flourishing next to the confectionery, Felsche acquired in 1845 the neighboring property in the Grimmaische Straße (Lähnesches Haus). 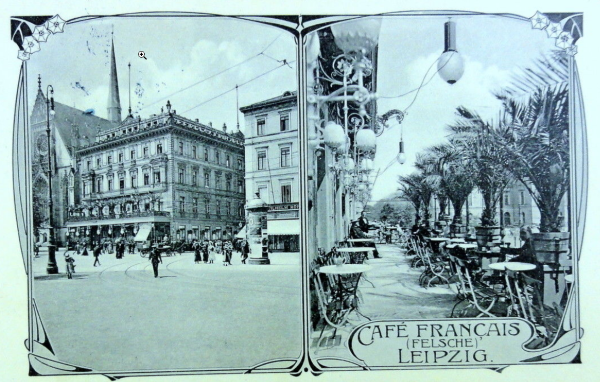 After the death of Felsch in 1867, his son-in-law Adolph Schütte-Felsche (1832-1908) took over the business. He decided at the beginning of the 20th century to rebuild the café. It was completed in 1910 and the house was reopened. He shifted the chocolate production to Gohlis.

With the beginning of the First World War, the French name had to give way, and the institution was henceforth called “Café Felsche”. Also under this name it belonged to the first addresses of the Leipzig gastronomy. The air raid on Leipzig on 4 December 1943, the Café Felsche was hit hard, which over 100 years of coffee house tradition came to an end.