Breslau is the largest city in western Poland. It lies on the banks of the River Oder in the Silesian Lowlands of Central Europe, roughly 350 kilometres (220 mi) from the Baltic Sea to the north and 40 kilometres (25 mi) from the Sudeten Mountains to the south.

Napoleonic redevelopments increased prosperity in Silesia and the city. The levelled fortifications opened space for the city to grow beyond its old limits. Breslau became an important railway hub and industrial centre, notably of linen and cotton manufacture and metal industry.

The reconstructed university served as a major centre of sciences, while the secularisation of life laid the base for a rich museum landscape. Johannes Brahms wrote his Academic Festival Overture to thank the university for an honorary doctorate awarded in 1881. 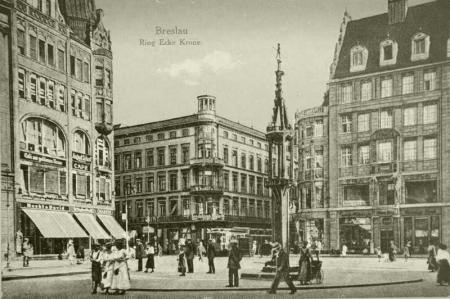 In 1821, (Arch)Diocese of Breslau was disentangled from the Polish ecclesiastical province (archbishopric) in Gniezno and made Breslau an exempt bishopric. On 10 October 1854, the Jewish Theological Seminary opened. The institution was the first modern rabbinical seminary in Central Europe. In 1863 the brothers Karl and Louis Stangen founded the travel agency Stangen, this was the second travel agency in the world.

The Unification of Germany in 1871 turned Breslau into the sixth-largest city in the German Empire. Its population more than tripled to over half a million between 1860 and 1910. The 1900 census listed 422,709 residents.

Wroclaw’s population is predominantly Catholic (Roman Catholic). The diocese was founded in the city as early as 1000, it was one of the first dioceses in Poland at that time. Now the city is the seat of an Archdiocese.

A thriving multicultural centre, Wroclaw is home to a growing student community and acts as the financial, cultural and commercial hub of western Poland, hosting a wide variety of music and theatrical events.

Wroclaw is a university city with a student population of over 130,000, making it one of the most youthful cities in the country. Since the beginning of the 20th century, the historical University of Wroclaw produced nine Nobel Prize winners and is renowned for its high quality of teaching.

It is also the seat of Wroc?aw Opera, National Puppet Theatre, Karol Lipi?ski Academy of Music and the National Forum of Music.