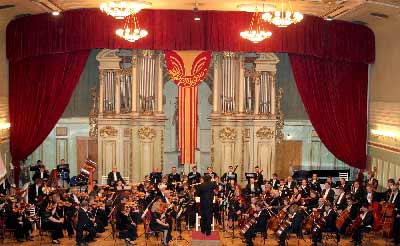 The Lviv Philharmonic Symphony Orchestra exists more than two centuries. In the early twentieth century, the orchestra was led by such guest conductors as Gustav Mahler (1860-1911), RRichard Strauss (1864-1949) and Ruggero Leoncavallo (1857-1919).

Organized musical life in Lviv has a centuries-old history: from the first workshops, into which united the Lviv musicians, to public and musical initiatives of Wolfgang Amadeus Mozart’s younger son, a great number of events preceded to a comparatively short, century-old ‘official’ history of the Lviv Philharmonic Society.

In 1826, a younger son of the renowned composer, Franz Xavier Mozart, lays the foundation of ‘The St. Cecilia Society’, which lasted till 1829. At the society functioned a big choir, as well as an institute of singing craft, which testifies to the beginnings of professional musical education in Lviv.

In 1962 Philharmonic was settled into a magnificent Secession building (7 Tchaikovsky Street), built in 1907 for the Musical society of Galicia. The organ with two manuals and pedal was the luxury for organ recitals. Now in the center of the stage we can observe only façade of the instrument with its wooden pipes being decorated in Baroque style.

In 1933, the orchestra became incorporated as the Philharmonic Orchestra. It has been conducted by Adam Soltys, Jacob Mund, Jerzy Kolaczkovski, and Stefan Sliedzinski as well as Kazimierz Wilkomirski, Tadeusz Mazurkiewicz, Hermann Scherchen, Ignaz Neumark, Jascha Horenstein, and Grzegorz Fitelberg. In December 1939, the new Soviet government “established” Symphony Orchestra was led by Isaac Pain and Mykola Kolessa.

The orchestra regularly participates in international festivals, including the International Musical Festival «Virtuosi», the International Contemporary Music Festival “Contrasts”, Beethoven evenings, Polish and Ukrainian Paderewski Festival, and others. The Lviv Philharmonic Symphony Orchestra is one of the largest orchestras in Ukraine, and is well known far beyond its borders. Today, the orchestra successfully tours such European countries as Poland, Italy, Spain, France, Switzerland, Germany and the Netherlands.