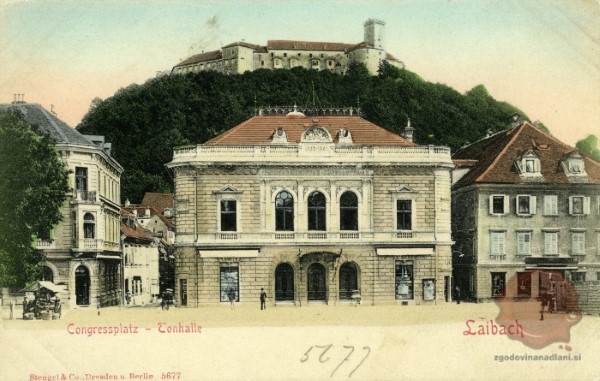 The Slovenian Philharmonics is the central music institution in Ljubljana and Slovenia. It holds classical music concerts of domestic and foreign performers as well as educates youth. It was established in 1701 as part of Academia operosorum Labacensis and is among the oldest such institutions in Europe.

Towards the end of 1701, a group of like-minded men gathered at the home of patrician Janez Bertold von Höffer and decided to establish the Ljubljana Academia Philharmonicorum, following the model of similar societies in nearby Italy. Its duties and mission were described in the Statutes of the Philharmonic Academy – LEGES – and for its emblem the organ of St Cecilia, its patroness, was chosen.

The annual duty of the members was to celebrate the festive day of St Cecilia. They were also to provide honourable funeral services (requiems) for deceased members. Their activities were twofold: closed sessions (attended by members only) and public performances, the latter of which took place only on special occasions, such as various solemn events related to the ruling dynasty.

The members of the Academy entertained, amongst others, distinguished guests during their state visits to Ljubljana and regularly participated in high masses at the foremost churches of the town.

The annual regatta on the Ljubljanica River was a popular social event in Ljubljana for centuries: “The Academy, consisting of the gentlemen belonging to the Philharmonic, appeared for the first time, with fireworks. The whole town turned out and all of the boats had been hired, so that in the end they ran out and some people were unable to take part.”

Thanks to the chronicles by Janez Dolni?ar (in German, Thalnitscher, 1655-1719) Annales urbis Labacensis and Epitome chronologica, as well as the 1767 report by Karl Seyfried Perizhofer, written for the provincial charity commission, all of the most important performances by Academy are known.

The first public appearance of the Academia is supposed to have taken place at the Bishop’s mansion on 13 December 1701. However, Dolni?ar states in his Annales that the “gentlemen musicians” had in fact already performed in Höffer’s apartment on 1 March 1700.

Undoubtedly, the activities of the Academia Philharmonicorum significantly enriched musical life in Ljubljana and, above all, laid new foundations for its development. Music became an aristocratic pastime, thus raising its reputation and status in the city.

Even when the supporting pillars of the Academia Philharmonicorum were gone its memory lived on. Without the Academy’s example the Philharmonic Society could not have been founded in 1794. This, too, was one of the first such associations in Europe. Both of these institutions, each in harmony with its time, marked Ljubljana as a town of music, creating the tradition we are justifiably still proud of today.

The last evidence of the formal existence of the Academia Philharmonicorum dates from 1779.

The site of the former Landschaftliches Theater was in 1888 sold at a public auction to the Philharmonic Society and in 1889 work began on the building of the present day Slovenian Philharmonic. The new monumental building was mostly finished by 1891 and completely in 1898 in line with the plans created in 1888 by the architect Adolf Wagner from Graz, who between 1873 and 1883 was working in Ljubljana as the head of the building office. Wagner’s plans were during the actual construction slightly adapted by the Ljubljana builder Vilijem Treo.

The new Philharmonic building, in terms of the basic ratio of the building volumes on the exterior, took on the shape of the former theatre. The building has a façade that is structured in the Neo-Renaissance style with rounded corners, typical of theatre buildings at that time. Later, the year 1701 was put on the façade under the medallion containing a lyre, commemorating the foundation of the Academia Philharmonicorum Labacensis.

Inside, one large and one small auditorium were designed, the smaller one was intended for chamber concerts. The large auditorium occupies the central part of the building and extends over two levels. The stage section in the east is semi-circular, whilst the walls are richly structured with pilasters and garland cornices. Initially, the building on the side facing the river finished in segments, whilst the side wings had cellars and the ground floor.

In 1937, following plans by the architect Jože Platner, the large auditorium was renovated and a new balcony added. At the same time, following the design by the architect Jože Ple?nik, an extension was built on the river side, which created a new appearance for the building on the eastern side: an undulating façade with vases and a colonnade on the ground floor connected the building to the river bank. Because of the extension, a few windows in the large hall were filled in. In 2001 the building was renovated following the plans drawn up by Biro 71; the Ple?nik colonnade along the riverside path was glazed in and the side wings were extended upwards.