Johann (Hans) Gerstner spent most of his life in Ljubljana where he left a deep mark in the local community, although the memory of him and of his special merits is rather marginalized and suppressed.

Emanuel Wirth, who later became a renowned and successful violinist and teacher, brought Gerstner to music. Both boys were taught how to play violin and music theory by Karl Rohm in Žlutice. Gerstner took also flute and singing lessons. Thirteen-year-old Gerstner (1864) was admitted to the Prague Conservatory, at that time one of the best music schools, to study violin. Josef Krej?í, the school’s director, taught him harmony and general bass, the other theoretical subjects were taught by Josef Foerster whose brother Anton Foerster recommended Gernster to take up a job in Ljubljana.

His post as a second violinist in Benewitz Quartet gave Gerstner (still as a student in Prague) an opportunity to play top contemporary Czech compositions, often directly from the original music sheets. He also played violin in the local German Opera Orchestra conducted by Bed?ich Smetana.

As a fresh graduate Gerstner took up the job of director of the Slovenian Theatre and violin teacher at the Filharmonic Society’s Music School in Ljubljana. Teaching was at the core of his activities in Ljubljana. He taught at up to ten schools. During his 48-year career at the Filharmonic Society’s Music School he formed more than a thousand violinists; Leo Funtek from Slovenia, who became a renowned violinist, conductor and composer based in Helsinki, Finland, was the most successful of Gerstner’s students.

Gerstner gave more than 700 concerts as an active performing violinist. He also played first violin at 154 concerts of chamber music. At his last orchestra performance (1911) he played both Beethoven’s Romances. He gave his last public performance in 1929 at a concert commemorating 100 years from Franz Schubert’s death. He also played violin in the main church choir in Ljubljana every Sunday for a long 40-year period, regularly attended workshops in Graz, Vienna, Salzburg, Mannheim and Cologne as a violinist and teacher, and worked as regional representative of Richard Wagner Company in Ljubljana. 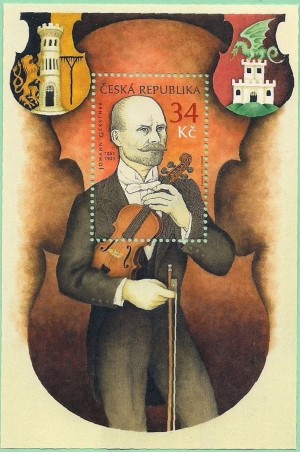 Despite his merits and medal received from Emperor Franz Joseph in 1902, Gerstner spent his old age in destitution and poverty. He was unable to earn some extra money because of his impaired vision. He died in 1939, his wife and a daughter met tragic death in a bomb attack on Ljubljana in 1945. His son Hans moved to Vienna where he wrote several books.

As a skilled violinist and teacher Gerstner paved the way for the development of the art of violin play in Slovenia. All further generations of violin teachers were able to build on the first and most essential foundations laid by him. But his contribution and unselfish dedication were not sufficiently appreciated, possibly due to his German origin because at the time of his life in Ljubljana the Slovenian population greatly disliked Germans. Yet he was a Ljubljaner who together with his family spent most of their life in Ljubljana. During his life he did not gain a position he was entitled to, despite his great contribution to the development of Slovenian culture.