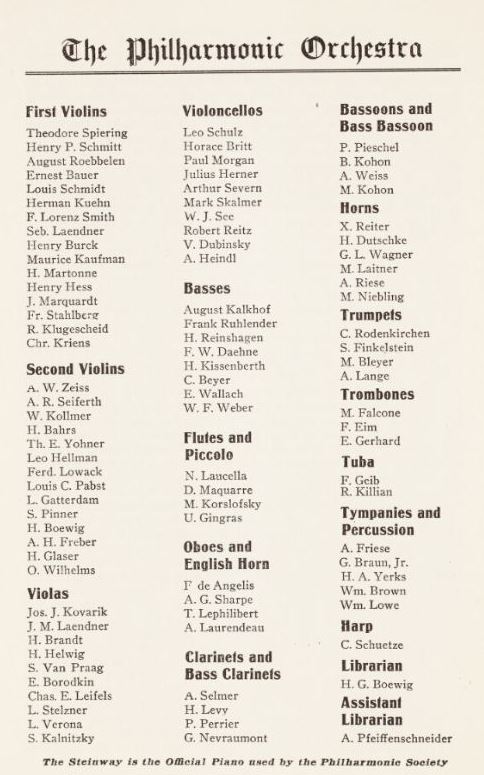 The New York Philharmonic was founded in 1842 by the American conductor Ureli Corelli Hill, with the aid of the Irish composer William Vincent Wallace. The orchestra was then called the Philharmonic Society of New York. It was the third Philharmonic on American soil since 1799, and had as its intended purpose, “the advancement of instrumental music.” The first concert of the Philharmonic Society took place on December 7, 1842 in the Apollo Rooms on lower Broadway before an audience of 600.

The concert opened with Beethoven’s Symphony No. 5, led by Hill himself. Two other conductors, German-born Henry Christian Timm and French-born Denis Etienne, led parts of the eclectic, three-hour program, which included chamber music and several operatic selections with a leading singer of the day, as was the custom. The musicians operated as a cooperative society, deciding by a majority vote such issues as who would become a member, which music would be performed and who among them would conduct. At the end of the season, the players would divide any proceeds among themselves.

After only a dozen public performances and barely four years old, the Philharmonic organized a concert to raise funds to build a new music hall. The centerpiece was the American premiere of Beethoven’s Symphony No. 9, to take place at Castle Garden on the southern tip of Manhattan. About 400 instrumental and vocal performers gathered for this premiere, which was conducted by George Loder.

The chorals were translated into what would be the first English performance anywhere in the world. However, with the expensive US$2.00 ticket price and a war rally uptown, the hoped-for audience was kept away and the new hall would have to wait. Although judged by some as an odd work with all those singers kept at bay until the end, the Ninth soon became the work performed most often when a grand gesture was required.

During the Philharmonic’s first seven seasons, seven musicians alternated the conducting duties. In addition to Hill, Timm and Étienne, these were William Alpers, George Loder, Louis Wiegers and Alfred Boucher. This changed in 1849 when Theodore Eisfeld was installed as sole conductor for the season. Eisfeld, later along with Carl Bergmann, would be the conductor until 1865.

That year, Eisfeld conducted the Orchestra’s memorial concert for the recently assassinated Abraham Lincoln, but in a peculiar turn of events which were criticized in the New York press, the Philharmonic omitted the last movement, “Ode to Joy”, as being inappropriate for the occasion. That year Eisfeld returned to Europe, and Bergmann continued to conduct the Society until his death in 1876.

Leopold Damrosch, Franz Liszt’s former concertmaster at Weimar, served as conductor of the Philharmonic for the 1876-1877 season. But failing to win support from the Philharmonic’s public, he left to create the rival Symphony Society of New York in 1878. Upon his death in 1885, his 23-year-old son Walter took over and continued the competition with the old Philharmonic. It was Walter who would convince Andrew Carnegie that New York needed a first-class concert hall and on May 5, 1891, both Walter and Russian composer Piotr Ilyich Tchaikovsky conducted at the inaugural concert of the city’s new Music Hall, which in a few years would be renamed for its primary benefactor, Andrew Carnegie. Carnegie Hall would remain the orchestra’s home until 1962.

The Philharmonic in 1877 was in desperate financial condition, caused by the paltry income from five concerts in the 1876-1877 season that brought in an average of only $168 per concert. Representatives of the Philharmonic wished to attract the German-born, American-trained conductor Theodore Thomas, whose own Theodore Thomas Orchestra had competed directly with the Philharmonic for over a decade and which had brought him fame and great success. At first the Philharmonic’s suggestion offended Thomas because he was unwilling to disband his own orchestra.

Because of the desperate financial circumstances, the Philharmonic offered Theodore Thomas the conductorship without conditions, and he began conducting the orchestra in the autumn of 1877. With the exception of the 1878-1879 season – when he was in Cincinnati and Adolph Neuendorff led the group – Thomas conducted every season for fourteen years, vastly improving the orchestra’s financial health while creating a polished and virtuosic ensemble. He left in 1891 to found the Chicago Symphony, taking thirteen Philharmonic musicians with him.

Another celebrated conductor, Anton Seidl, followed Thomas on the Philharmonic podium, serving until 1898. Seidl, who had served as Wagner’s assistant, was a renowned conductor of the composer’s works; Seidl’s romantic interpretations inspired both adulation and controversy. During his tenure, the Philharmonic enjoyed a period of unprecedented success and prosperity and performed its first world premiere written by a world-renowned composer in the United States – Antonín Dvo?ák’s Ninth Symphony “From the New World”.

Seidl’s sudden death in 1898 from food poisoning at the age of 47 was widely mourned. Twelve thousand people applied for tickets to his funeral at the Metropolitan Opera House at 39th Street and Broadway and the streets were jammed for blocks with a “surging mass” of his admirers.

According to Joseph Horowitz, Seidl’s death was followed by “five unsuccessful seasons” under Emil Paur (music director from 1898-1902) and Walter Damrosch (who served for only one season, 1902-03).” After this, he says, for several seasons (1903-1906) the orchestra employed guest conductors, including Victor Herbert, Édouard Colonne, Willem Mengelberg, Fritz Steinbach, Richard Strauss, Felix Weingartner, and Henry Wood.

In 1909, to ensure the financial stability of the Philharmonic, a group of wealthy New Yorkers led by two women, Mary Seney Sheldon and Minnie Untermyer, formed the Guarantors Committee and changed the Orchestra’s organization from a musician-operated cooperative to a corporate management structure.

The Guarantors were responsible for bringing Gustav Mahler to the Philharmonic as principal conductor and expanding the season from 18 concerts to 54, which included a tour of New England. The Philharmonic was the only symphonic orchestra where Mahler worked as music director without any opera responsibilities, freeing him to explore the symphonic literature more deeply.

In New York, he conducted several works for the first time in his career and introduced audiences to his own compositions. Under Mahler, a controversial figure both as a composer and conductor, the season expanded, musicians’ salaries were guaranteed, the scope of operations broadened, and the 20th-century orchestra was created.

In 1911 Mahler died unexpectedly, and the Philharmonic appointed Josef Stransky as his replacement. Many commentators were surprised by the choice of Stransky, whom they did not see as a worthy successor to Mahler. Stransky led all of the orchestra’s concerts until 1920, and also made the first recordings with the orchestra in 1917.