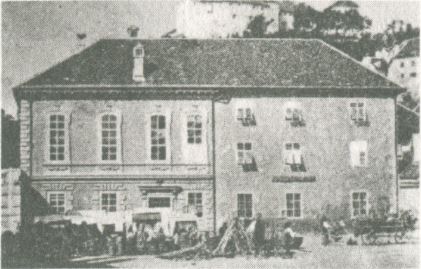 In 1597, Jesuits arrived in the city, followed in 1606 by Capuchins, to eradicate Protestantism. Only 5 of all the residents of Ljubljana at the time were of Catholic confession, so it took quite a while to make it again Catholic. Jesuits organized the first theatrical productions in the town, fostered the development of Baroque music and established Catholic schools. In the middle and the second half of the 17th century, foreign architects built and renovated numerous monasteries, churches, and palaces in Ljubljana and introduced the Baroque architecture.

In 1702, the Ursulines settled in the town, where, the following year, they opened the first public school for girls in the Slovene Lands. Some years later, the construction of the Ursuline Church of the Holy Trinity started. In 1779, St Christopher’s Cemetery replaced the cemetery at St Peter’s Church as the main Ljubljana cemetery. During the Napoleonic interlude, Ljubljana was the capital of the Illyrian Provinces from 1809 to 1813. In 1815, the city became Austrian again and from 1816 to 1849 was the administrative center of the Kingdom of Illyria in the Austrian Empire.

The  (Cerkev sv. Jakoba) was built by Jesuits between 1613 and 1615 on the site next to the former Jesuit monastery (Ljubljana’s first college of theology, philosophy, medicine and music), which was previously occupied by an old Gothic church. The church was built in the Baroque style between 1613 and 1615 on the site of an older Gothic style church, erected in the early 15th century by the Augustinian Order. In 1598, the old church was acquired by the Jesuits and thus became the first Jesuit church in the Slovene Lands and one of the first in the Inner Austria.

The interior was designed by the Italian architect Francesco Robba, who designed the main altar, and the Slovene stonemason Luka Mislej, who designed the entrance portal and the stone side altars. After the Ljubljana earthquake of 1895, the church was renovated by the Linz-based architect Raimund Jeblinger and the interiors were redesigned by Janez Šubic. Nevertheless, much of the original Baroque style has remained intact.