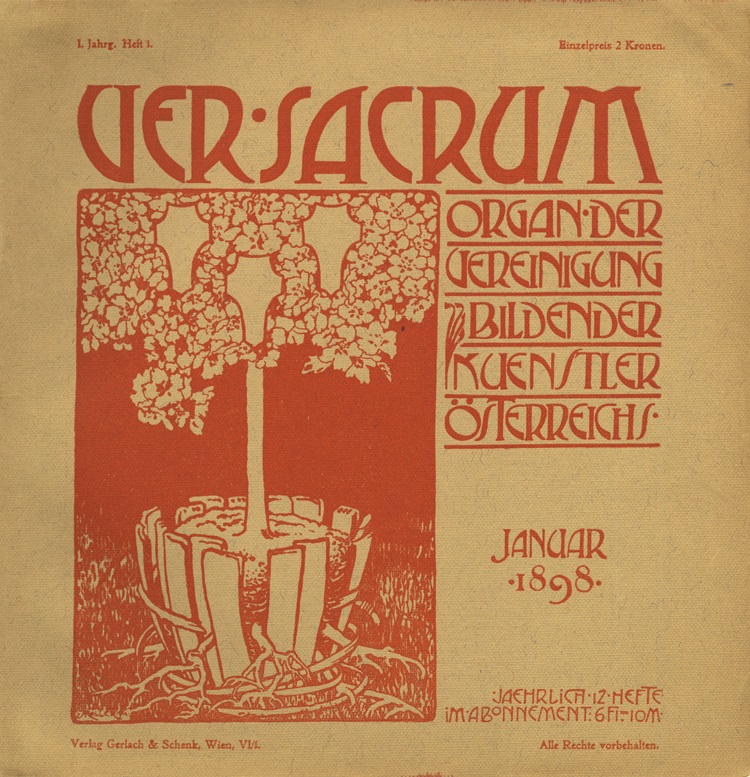 The Association of Visual Artists Vienna Secession was founded in 1897 and presented its first exhibition in 1898, the same year the new Secession (building) was completed to the designs of Joseph Maria Olbrich (1867-1908)

The Vienna Secession (German: Wiener Secession; also known as the Union of Austrian Artists, or Vereinigung Bildender Künstler Österreichs) was formed in 1897 by a group of Austrian artists who had resigned from the Association of Austrian Artists, housed in the Vienna Künstlerhaus. This movement included painters, sculptors, and architects. The first president of the Secession was Gustav Klimt, and Rudolf von Alt was made honorary president. Its official magazine was called Ver Sacrum.

The Vienna Secession was founded on 3 April 1897 by artists Gustav Klimt, Koloman Moser, Josef Hoffmann, Joseph Maria Olbrich, Max Kurzweil, Wilhelm Bernatzik and others. Although Otto Wagner is widely recognised as an important member of the Vienna Secession he was not a founding member. The Secession artists objected to the prevailing conservatism of the Vienna Künstlerhaus with its traditional orientation toward Historicism. The Berlin and Munich Secession movements preceded the Vienna Secession, which held its first exhibition in 1898.

The group earned considerable credit for its exhibition policy, which made the French Impressionists somewhat familiar to the Viennese public. The 14th Secession exhibition, designed by Josef Hoffmann and dedicated to Ludwig van Beethoven, was especially famous. A statue of Beethoven by Max Klinger stood at the center, with Klimt’s Beethoven frieze mounted around it. The Klimt frieze has been restored and can be seen in the gallery today.

In 1903, Hoffmann and Moser founded the Wiener Werkstatte as a fine-arts society with the goal of reforming the applied arts (arts and crafts). On 14 June 1905 Gustav Klimt and other artists seceded from the Vienna Secession due to differences of opinion over artistic concepts.

Unlike other movements, there is not one style that unites the work of all artists who were part of the Vienna Secession. The Secession building could be considered the icon of the movement. Above its entrance was placed the phrase “Der Zeit ihre Kunst. Der Kunst ihre Freiheit.” (“To every age its art. To every art its freedom.”). Secession artists were concerned, above all else, with exploring the possibilities of art outside the confines of academic tradition. They hoped to create a new style that owed nothing to historical influence. In this way they were very much in keeping with the iconoclastic spirit of turn-of-the-century Vienna (the time and place that also saw the publication of Freud’s first writings).

The Secessionist style was exhibited in a magazine that the group produced, called Ver Sacrum, which featured highly decorative works representative of the period.

Along with painters and sculptors, there were several prominent architects who became associated with The Vienna Secession. During this time, architects focused on bringing purer geometric forms into the designs of their buildings. The three main architects of this movement were Josef Hoffmann, Joseph Maria Olbrich, and Otto Wagner. Secessionist architects often decorated the surface of their buildings with linear ornamentation in a form commonly called whiplash or eel style, although Wagner’s buildings tended towards greater simplicity and he has been regarded as a pioneer of modernism.

In 1898, the group’s exhibition house was built in the vicinity of Karlsplatz. Designed by Joseph Maria Olbrich, the exhibition building soon became known simply as “the Secession” (die Sezession). This building became an icon of the movement. The secession building displayed art from several other influential artists such as Max Klinger, Eugène Grasset, Charles Rennie Mackintosh, and Arnold Bocklin (1827-1901).

Wagner’s way of modifying Art Nouveau decoration in a classical manner did not find favour with some of his pupils who broke away to form the Secessionists. One was Josef Hoffmann who left to form the Wiener Werkstatte. A good example of his work is the Stoclet Palace in Brussels (1905).