Um Mitternacht moves from the most brilliant day to deepest night, and the change is once more immediately apparent in its coloration. Mahler calls for an orchestra without strings. In addition to pairs of woodwinds (with a single oboe d’amore replacing the usual oboes), three horns, two trumpets, three trombones, a single tuba, and timpani, both harp and piano are prescribed.

The length, weight and scale of the song match its theme. Five six-line stanzas (each of which begins and ends with “Um Mitternacht”) are set in a rich and complex contrapuntal idiom, more symphonic than lyric in character.

Three central motives are introduced in the opening bars and form the foundation for much of the song: a fluctuating dotted figure in the clarinets; a rising and falling figure, also dotted, in the flute and then the oboe (also used in the Eighth Symphony); and an even descending scale in the horns (later also used in its inverted rising form).

Each of the first four stanzas, in which the poet sends his thoughts upward into the dark sky and finds no answer to life’s struggles and sorrows, presents a different quiet permutation of these motives, combined with new melodic outgrowths.

They lead finally to the transcendent moment in the concluding stanza in which he finds his answer through surrender to a supreme power, the “Lord of death and life,” in a hymn-like conclusion with triumphant brass fanfares, the only big dynamic climax in the entire group of songs. 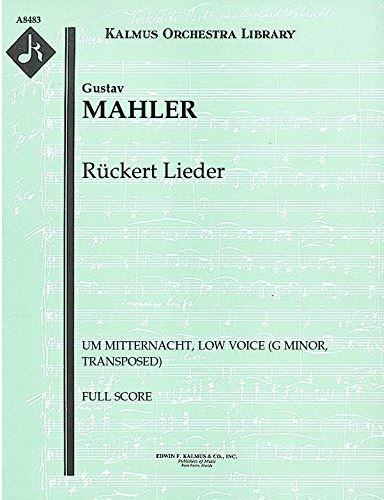 This song offers an interesting contrast with another midnight song by Mahler: his setting of a Nietzsche text, which he originally titled “Was mir die Nacht erzählt” (What night tells me), in the fifth movement of the Third Symphony. There, although the two songs share at least one motive, the overt affirmative climax is deliberately avoided.

“Um Mitternacht” (At midnight) recounts the poet’s battle with darkness (in both its literal and figurative sense) until he finally gives up his search and commends himself into the hands of God. Three central instrumental motives are introduced in the opening bars and form the foundation for much of the song: a three-note dotted figure in the clarinets; a rising and falling dotted figure in the flute and an even descending scale in the horns, mirrored by an ascending scale in the voice.

While the poem has five regular six-line stanzas (the first and last line of each are “Um Mitternacht”), Mahler sets each of them to different music. In musical imitation of the poet’s persistent striving, he sets each stanza with new music. The final stanza, the transcendent moment in which he finds his answer through surrender to the “Lord of death and life,” concludes with triumphant brass fanfares, harp glissandi and a resounding plagal (“church”) cadence.