Antonio Scotti was an Italian baritone. He was a principal artist of the New York Metropolitan Opera for more than 33 seasons, but also sang with great success at London’s Royal Opera House, Covent Garden, and Milan’s La Scala. Antonio Scotti was born in Naples, Italy. His family wanted him to enter the priesthood but he embarked instead on a career in opera. He received his early vocal training from Esther Trifari-Paganini and Vincenzo Lombardi. According to most sources, he made his debut at Malta’s Theatre Royal in 1889, performing the role of Amonasro in Giuseppe Verdi’s Aida. Engagements at various Italian operatic venues ensued and he later gained valuable stage experience singing in Spain, Portugal, Russia and South America.

In 1898, he debuted at Italy’s most renowned opera house, La Scala, Milan, as Hans Sachs in Die Meistersinger. This now seems a surprising choice of role for Scotti because his subsequent career did not encompass the operas of Richard Wagner. Scotti’s American debut took place in the fall (autumn) of 1899, when he sang in Chicago.

On 27 December 1899 he made his first appearance in New York City at the Metropolitan Opera, undertaking the title role in Mozart’s Don Giovanni. He would become an audience favorite at the Met, earning acclaim for his graceful singing of Donizetti’s bel canto music as well as for the touch of elegance that he brought to his more forceful Verdi and verismo interpretations. Scotti appeared at Covent Garden in London for the first time in 1899, singing Don Giovanni. He would return to London on many occasions prior to World War I.

At the Met in 1901, Scotti became the first artist to sing the role of Baron Scarpia in Giacomo Puccini’s Tosca in America. He appeared, too, in the American premieres of Francesco Cilea’s Adriana Lecouvreur, Ermanno Wolf-Ferrari’s Le donne curiose, Umberto Giordano’s Fedora, Franco Leoni’s L’Oracolo and Isidore de Lara’s Messaline. Scotti also sang a variety of mainstream baritone parts during his time at the Met, including Rigoletto, Malatesta, Belcore, Iago, Falstaff, Marcello, Sharpless and, as we have seen, Don Giovanni and Scarpia. He performed opposite his close friend Enrico Caruso when the illustrious tenor made his Met debut as the Duke of Mantua in 1903, and partnered 15 different Toscas over the course of his long career at the house.

In 1912 Scotti’s arrival in the United States with Pasquale Amato and William Hinshaw for his next Met season received extensive newspaper coverage . He performed at Covent Garden on a regular basis until 1910, with additional appearances in the 1913–1914 season. During this period, he became not only London’s first Scarpia but also its first Sharpless in Puccini’s Madama Butterfly (in 1900 and 1905 respectively). In 1917, he was elected an honorary member of Phi Mu Alpha Sinfonia, the American fraternity for male musicians, at the New England Conservatory of Music. 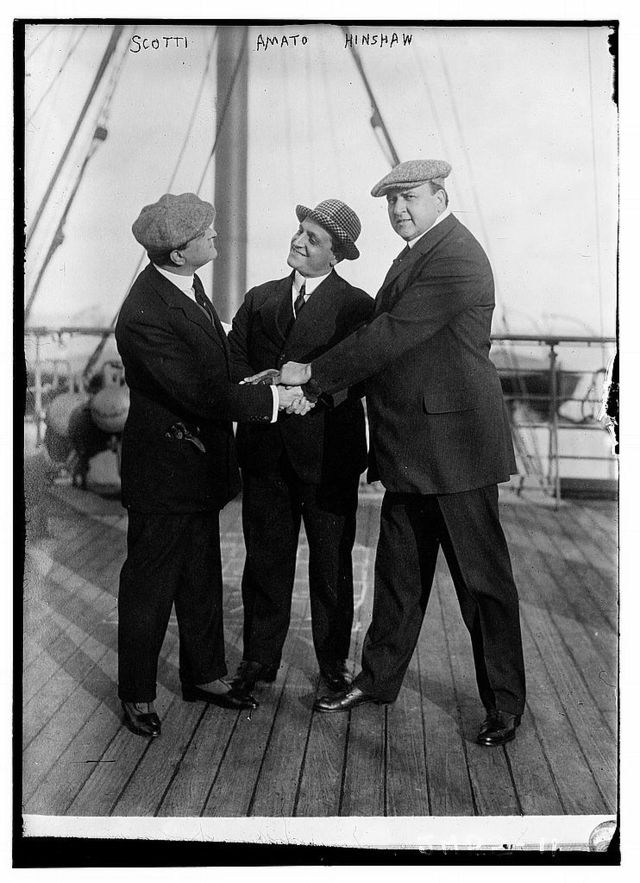 He formed his own troupe of singers in 1919, calling it, naturally enough, the Scotti Opera Company. He managed it for several seasons while touring the United States. Scotti celebrated his 25th anniversary with the Met on 1 January 1924 in a gala performance of Tosca. By the 1930s, Scotti’s voice had declined considerably but he retained his place on the Met’s roster of singers due to his outstanding histrionic ability. His final Met appearance occurred on 20 January 1933, when he sang Chim-Fen in L’Oracolo; he had created the role in 1905. Scotti returned to Italy to spend his retirement. He died in poverty in Naples in 1936, aged 70.