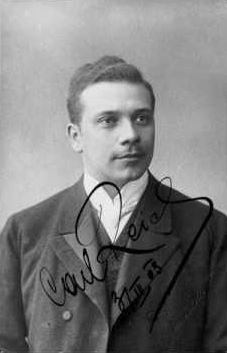 Carl Reich was born in Mährisch Budwitz on 18 June 1877. He studied in Vienna with the legendary Josef Gänsbacher, who also taught Ternina, Jadlowker, Demuth, Naval, Wilt and countless others. After his debut in Olmütz (Olomouc) in 1901 he went to Frankfurt, where he quickly became extremely popular.

In 1905 he joined the Viennese Court Opera, where he sang for six years. Then he left the stage to concentrate on concert work and (later) teaching. He died in Vienna in 1942. It is possible that he, being of Jewish faith, commited suicide to avoid deportation.

Reich is a singer largely forgotten today, though by collectors of German singing his very rare records are in high demand. He is not listed in the Singers’ Dictionary by Kutsch and Riemens.