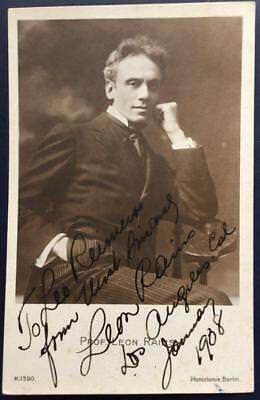 He made his debut (1897) with the Damrosch-Ellis Opera Company. He spent eighteen years with the Dresden Royal Opera (and in other European houses) but because he was an American citizen he felt obliged to leave Germany at the outbreak of World War I. Although he was one of the finest basses in Germany, he appeared, sadly, with few accolades at the Metropolitan Opera in 1909.

Already as a child he sang as a choirboy in the choirs of the Calvary Church and the Church of the Incarnation in New York.

At the age of twelve he entered the stage for the first time, the New York Star Theater.

Rains studied at the National Conservatory in New York in 1890, which he left as a graduate student and was a student of Oscar Saenger. He then went to Paris for further training to Jacques Bouhy. First, he worked as a concert and Oratorienänger in America and then spent two years with the troupe of Frank Damrosch. There he worked as a serious bassist, who sang his parts Italian, German, French and English, always in the original text of the opera in question. At the time, US critics described him as the most promising bass singer since Karl Formes.

On June 4, 1899, he debuted as “Tannhäuser” in Dresden and remained there until 1917. With the entry of the US war in the First World War, he was forced to leave Germany for the United States. From 1917 to 1918 he worked in several silent films as an actor, u. a. featured in four films as Detective Joe Jenkins, these films were all produced in Denmark, so it seems he had returned to his homeland via this country. Back in his homeland, he worked only as a concert singer. From 1924 he worked in Los Angeles as a singing teacher. He also worked as an art and cabinet maker.

In Dresden, he participated in several world premieres and guested in Berlin, Vienna, Prague, Frankfurt am Main etc. In 1909 he was a guest at the Metropolitan Opera in New York, where he u. a. played the “Méphistophélès” in Gounod’s Faust. sang. In 1904 he was at the Bayreuth Festival of “Hagen” in the Götterdämmerung.

His voice was a particularly beautiful bass, especially at higher altitudes: “The phrasing and nuancing of the lecture are mostly appreciated. No less is his timbre praised, as well as the metallic sound and the balance of his voice in the individual registers.”