Edyth Walker was an American opera singer who had an active international career from the 1890s through the 1910s. She began her career performing roles from the mezzo-soprano repertory, but later successfully added several soprano parts to her repertoire as well. While she did perform in Italian and French language operas, she had a clear affinity for works in the German language. She particularly excelled in the operas of Richard Wagner. After retiring from the stage, she was active as a voice teacher in both France and the United States. Her voice is preserved on several gramophone recordings, made mainly for His Master’s Voice, between 1902-08.

Born in Hopewell, New York, Walker had her initial musical training at her church in her native town where she sang in the choir and began performing solos at the age of 14. She took a position as a teacher in Utica, New York, where she was also active as a soloist at her church. She entered and won a singing competition which provided her with a scholarship that enabled her to study singing in Europe. She arrived in Dresden, Germany, in 1891 where she became a pupil of Aglaia Orgeni. She later studied singing with Marianne Brandt in Vienna.

Walker made her professional debut as a concert singer at the Gewandhaus in Leipzig in 1892. She made her professional opera debut on 11 November 1894 at the Berlin State Opera as Fidès in Giacomo Meyerbeer’s Le prophète. The following year she became a member of the Vienna State Opera where she was a leading mezzo-soprano with the company for eight seasons. She notably sang the role of Magdalena in the Vienna premiere of Wilhelm Kienzl’s Der Evangelimann in 1896. She was also much admired in Vienna for her interpretation of the role of Amneris in Giuseppe Verdi’s Aida. 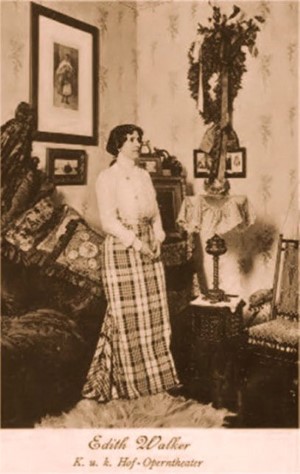 While under contract in Vienna, Walker made guest appearances with other European theatres. She made her first appearance in the UK at the Royal Opera House in London, singing the role of Amneris on 16-05-1900. She sang several more roles at Covent Garden in 1900-1901, all of them from the Wagnerian repertoire, including Erda in Siegfried, Fricka in both Die Walküre and Das Rheingold, Ortrud in Lohengrin, and Waltraute in Götterdämmerung. In 1901 she portrayed the role of Elvira in Wolfgang Amadeus Mozart’s Don Giovanni at the Salzburg Festival.

At the close of the 1902-1903 season, Walker left her position in Vienna abruptly after a dispute with Gustav Mahler. Having broken her contract with the influential Vienna opera house, she found it impossible to gain a permanent position with another German or Austrian theatre under such circumstances. She therefore returned to the United States and signed a contract with the Metropolitan Opera of New York City. She made her debut at the Metropolitan Opera House on 30-11-1903 as Amneris to the Aida of Johanna Gadski and the Radamès of Enrico Caruso.

She sang at the Met for three seasons, notably appearing in the Met’s first stagings of Gaetano Donizetti’s Lucrezia Borgia (as Maffio Orsini) and Johann Strauss II’s Die Fledermaus (as Prince Orlofsky). She portrayed mainly mezzo-soprano parts at the Met like Brangäne in Wagner’s Tristan und Isolde, Erda, Fricka, La Cieca in Amilcare Ponchielli’s La Gioconda, Leonora in La favorita, Nancy in Martha, Ortrud, Siebel in Charles Gounod’s Faust, Urbain in Les Huguenots, and Waltraute. Her final and 108th performance with the Metropolitan Opera was in the title role of Karl Goldmark’s Die Königin von Saba for an out of town engagement in San Francisco on April 16, 1906.

While on contract with the Met, Walker began adding soprano roles to her repertoire, beginning with Brünnhilde in Die Walküre which she first performed at the Metropolitan Opera House in December 1905. That was the only soprano role she sang on the Met Stage. However, after leaving the Met in 1906 to return to Europe, she added more soprano roles to her stage credits. Walker had already been performing periodically as a guest artist with the Hamburg State Opera since 1903, and upon her return to Europe she signed a contract with that company. She remained with the State Opera through 1912 performing both mezzo and soprano roles. Among the soprano parts she performed there were Isolde in Tristan und Isolde, Kundry in Parsifal, and the title role in Salome.

In 1908 Walker sang the roles of Ortrud and Kundry at the Bayreuth Festival. That same year she had a major triumph as Isolde at Covent Garden. She returned to the Royal Opera House in 1910 to portray the title role in the critically acclaimed UK premiere of Richard Strauss’ Elektra under the baton of Sir Thomas Beecham, and to sing the part of Thirza in Ethel Smyth’s The Wreckers. 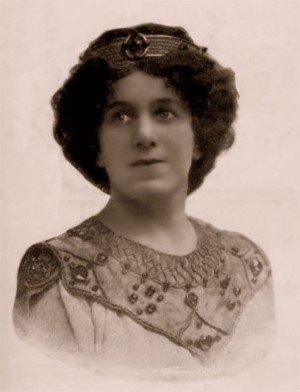 That same year she sang at the wedding of William Ernest, Grand Duke of Saxe-Weimar-Eisenach and Princess Feodora of Saxe-Meiningen. Kaiser Wilhelm II was in attendance and, impressed with her performance, the emperor made a point of having Walker presented to him. From 1912-1917 she sang annually at the Munich Festivals with the Bavarian State Opera. She made appearances as a guest artist at the Cologne Opera, La Monnaie and the Prague State Opera, among others. Her final performances were singing various roles in Wagner’s The Ring Cycle at Elberfeld in 1918. 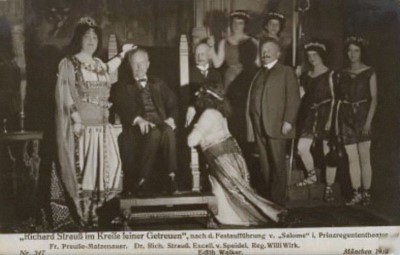 After her retirement from the stage, Walker resided in Scheveningen, Holland until 1919 when she moved to Paris. She worked there as a voice teacher where she taught out of a private studio. In 1933 she joined the faculty at the American Conservatory in Fontainebleau where she taught through 1936. She then moved back to New York City where she continued to teach until her death 14 years later. Among her notable pupils were Irene Dalis and Blanche Thebom. She died at her home in New York City in 1950 at the age of 79 after a brief illness.

She sang at age 14 as a soloist in the Old Church of Hopewell, then in Utica (New York) and on Long Iceland. She worked for a while as a school teacher. She came to Europe in 1891 and was trained by Aglaia Orgeni in Dresden. Further studies with Marianne Brandt in Vienna. She made her debut in 1894 at the Berlin Court Opera as Fides in ‘’Prophet’’ by Meyerbeer. First major success in 1895 with a concert in Leipzig Gewandhaus under Carl Reinecke. In 1895 she was engaged by the Vienna Court Opera, where she sang the role of Fides in ‘’Prophet’’ by Meyerbeer and Azucena in ‘’Trovatore’’ and remained until 1903. In 1896 she sang in the Vienna premiere of the opera ‘’The Evangelimann’’ of Kienzl.

At the Salzburg Mozart Festival in 1901 she created the role of Donna Elvira in ‘’Don Giovanni’’. In 1903, after a dispute with Gustav Mahler, she left the Vienna Opera House. In 1903 she was engaged by the Metropolitan Opera in New York, where she made her debut as Amneris in ‘’Aida’’. She appeared at the Metropolitan Opera in “Lohengrin”, “Tristan und Isolde”, ‘’Faust’’, “Gioconda”, ‘’Martha’’, ‘’Favorita’’, “ and ‘’Lucrezia Borgia’’ (1904). In 1905 she sang here in the premiere of Johann Strauss’s operetta ‘’Die Fledermaus’’. Then she joined in the 1906-1907 season at the Court Opera in Berlin and from 1907 to 1912 was a celebrated artist of the Hamburg Opera. At the Covent Garden Opera in London she performed in 1900 as Amneris, Ortrud, Fricka and Waltraute, then in 1908 and 1910 as Isolde as well as Thirza “The Wreckers” by Mrs. Ethel Smith and Elektra on 19-10-1910 in the English premiere of Richard Strauss’s opera ‘’Elektra’’.

She made guest appearances in Brussels, Leipzig, Frankfurt (1907-12), Cologne and Prague with great success, she was especially admired as an interpreter in R. Wagner’s operas. At the Bayreuth Festival in 1908, she sang the role of Kundry in ‘’Parsifal’’ and Ortrud in “Lohengrin”. In 1910 she sang with great triumph in the Strauss Festival in Holland as Salome and Elektra. In 1909 she sang at the Beethoven Festival in the Hague the role of Leonore in ‘’Fidelio’’ under Willem Mengelberg. In the 1912-1917 seasons she worked at the Court Opera in Munich. In 1918 she sang at the Municipal Theatre of Elberfeld her farewell performance in Nibelungenring. After her retirement from the stage, Walker resided in Scheveningen, Holland until 1919 when she moved to Paris. She worked there as a voice teacher where she taught out of a private studio.

In 1933 she joined the faculty at the American Conservatory in Fontainebleau where she taught through 1936. She then moved back to New York City where she continued to teach until her death 14 years later.