Ernestine Schumann-Heink, née Rössler, was a celebrated German Bohemian, later American, operatic contralto, noted for the size, beauty, tonal richness, flexibility and wide range of her voice. She was born Ernestine “Tini” Rössler to a German-speaking family in the town of Libe? (German: Lieben), Bohemia, Austrian Empire, which is now part of the city of Prague, Czech Republic. Her father Hans Rössler was a shoe maker; while previously serving as an Austrian cavalry officer, he had been stationed in northern Italy (then an Austrian protectorate), where he met and married Charlotte Goldman, with whom he returned to Libe?.

When Ernestine was three years old, the family moved to Verona. In 1866, at the outbreak of the Austro-Prussian War, the family moved to Prague, where she was schooled at the Ursuline Convent. At war’s end, the Roesslers moved to Podgórze, now part of Kraków. The family moved again to Graz when Tini was thirteen. Here she met Marietta von LeClair, a retired opera singer, who agreed to give her voice lessons.

In 1877, Rössler made her first professional performance, in Beethoven’s Ninth Symphony in Graz, appearing with soprano Maria Wilt, and her operatic debut at Dresden’s Royal Opera House on October 15, 1878 as Azucena in Il trovatore. In 1882, she married Ernest Heink, secretary of the Semperoper, the Saxon State Opera Dresden; this violated the terms of their contracts, and both had their employment abruptly terminated.

Heink took a job at the local customs house and was soon transferred to Hamburg. Ernestine remained in Dresden to pursue her career, and eventually rejoined her husband when she secured a position at the Hamburg Opera. She went on to have four children with Heink. One of their children, Ferdinand Schumann-Heink (1893–1958) was a prolific, though mostly unbilled, Hollywood character actor.

Ernest Heink was again thrown out of work when Saxons were banned from government positions, and departed to Saxony to find work. Ernestine, pregnant, did not follow him; they were divorced in 1893. That same year she married actor Paul Schumann, with whom she had three more children. Her second marriage lasted until Paul Schumann’s death in 1904. She came to the United States to make a brief foray into the Broadway theater, playing in Julian Edwards’ operetta Love’s Lottery, in which her performance was noted for the fact that she often broke off to ask the audience whether her English was good enough. She left the production after 50 performances and soon returned to opera.

Her breakthrough into leading roles was provided when prima donna Marie Goetze argued with the director of the Hamburg opera. He asked Ernestine to sing the title role of Carmen, without rehearsal, which she did to great acclaim. Goetze, in a fit of pique, cancelled out of the role of Fidès in Le prophète, to be performed the following night, and was again replaced by Ernestine.

Schumann-Heink replaced Goetze as Ortrud in Lohengrin the following evening, one more time without rehearsal, and was offered a ten-year contract. She performed with Gustav Mahler at the Royal Opera House, Covent Garden, London, and became well known for her performances of the works of Richard Wagner at Bayreuth, singing at the Bayreuth Festivals from 1896 to 1914. Ernestine Schumann-Heink’s first appearance at the Metropolitan Opera in New York City was in 1898, and for decades thereafter performed regularly at “the Met.”

Schumann-Heink recorded the first of her many musical “gramophone” performances in 1900. Several of these early sound recordings originally released on 78 RPM discs have been reissued on CD format and continue to impress due to Schumann-Heink’s rich vocal tone quality and impressive musical technique. 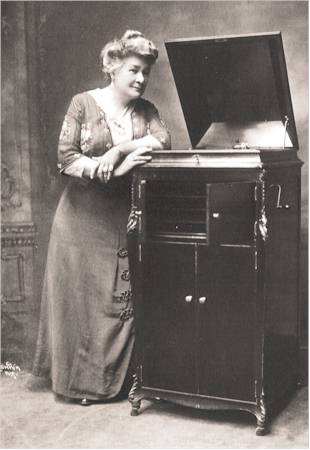 In 1905 she married her manager William Rapp, Jr. They divorced in 1915. While fighting a legal battle in Germany over her late husband’s estate, she filed U.S. naturalization papers on February 10, 1905, which became final on March 3, 1908. She and her new husband lived on Grandview Avenue, North Caldwell, Essex County, New Jersey in her “Villa Fides” from April 1906 to December 1911; she then moved to 500 acres (2 km²) of farm land located just outside of San Diego, California (in an area known as Helix Hill in Grossmont), purchased by her in January 1910, where she would live for most of her life. Her residence there still stands.

In 1909, she created the role of Klytaemnestra in the debut of Richard Strauss’s Elektra, of which she said she had no high opinion, calling it “a fearful din.” Strauss was not entirely captivated by Schumann-Heink; according to one story, during rehearsals he admonished the orchestra, “Louder! I can still hear Madame Schumann-Heink!” In 1915, she appeared as herself in the early documentary film Mabel and Fatty Viewing the World’s Fair at San Francisco directed by Fatty Arbuckle, who also appears as himself in the film.