Felix Josef von Mottl was an Austrian conductor and composer. He was regarded as one of the most brilliant conductors of his day. He composed three operas, of which Agnes Bernauer (Weimar, 1880) was the most successful, as well as a string quartet and numerous songs and other music. His orchestration of Richard Wagner’s Wesendonck Lieder is still the most commonly performed version. He was also a teacher, counting among his pupils Ernest van Dijck (1861-1923) and Wilhelm Petersen.

Mottl was born in Unter Sankt Veit, today Hietzing, Vienna in 1856. His date of birth has been reported variously as 29 July, 24 August and 29 August. After early voice training at the Löwenburg Konvikt, a training school for the Imperial Court Chapel, he had a successful career at the Vienna Conservatory. He was soon recognized as a gifted conductor of Wagner’s music, assisted Hans Richter in preparing the first complete Ring Cycle at Bayreuth in 1876, and himself conducted Tristan und Isolde at Bayreuth in 1886. 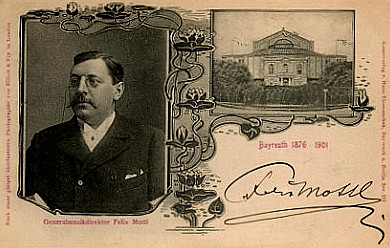 From 1881 to 1903 he was chief conductor at the Karlsruhe Opera and was widely renowned for his work there, particularly in Wagner, Berlioz and Chabrier, whose operas he championed. He also orchestrated Chabrier’s Bourrée fantasque and Trois valses romantiques, and arranged a popular suite of orchestral excerpts from Christoph Willibald Gluck’s operas. In later years, as a conductor of Wagner especially, he visited London and New York, guest-conducting the Metropolitan Opera in 1903. He was made a director of the Akademie der Künste at Berlin in 1904. 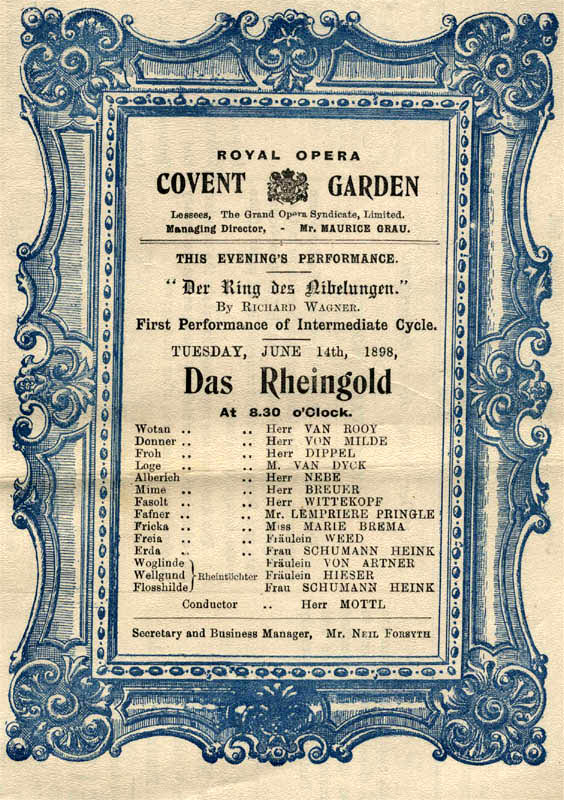 In June 1907 he cut some player piano rolls with Welte-Mignon, including his own piano transcription of the Prelude, the Love Duet and Brangäne’s Warning from Tristan. He suffered a heart attack on 21 June 1911 while conducting his 100th performance of Tristan in Munich. He was taken to a hospital where he died 11 days later on 2 July, but not before marrying his longtime mistress, the soprano Zdenka Fassbender. 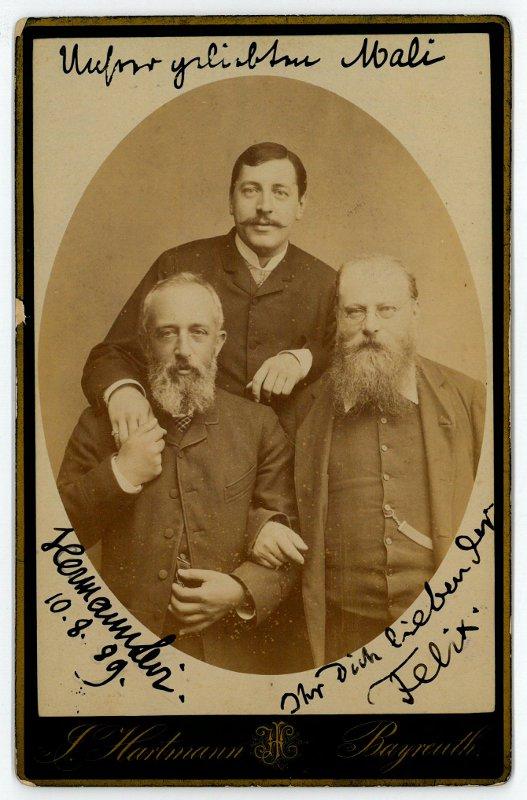 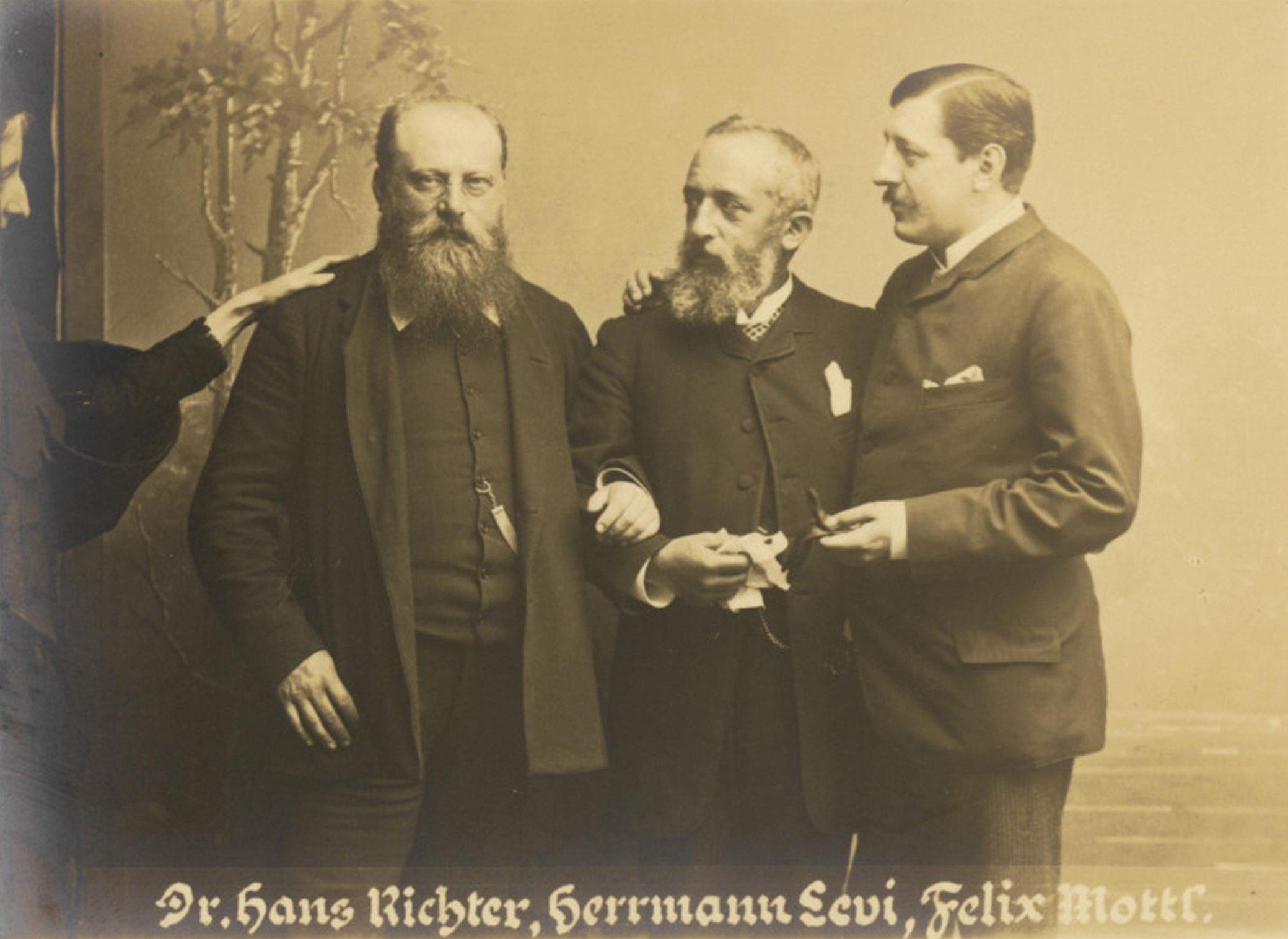 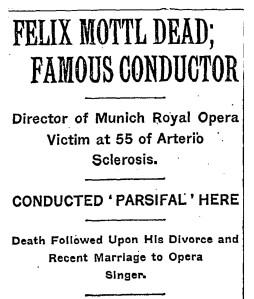 Felix Mottl studied with Anton Bruckner. He assisted Richard Wagner at the first Festspiele in Bayreuth in 1876, where he directed Wagner’s “Ring des Nibelungen”. His best known opera “Agnes Bernauer” was first performed in 1880 in Weimar.

From 1881 until 1903 he was conductor at the Court of Karlsruhe. In 1886 he directed “Tristan und Isolde” at Bayreuth. He often directed in Bayreuth and was a teacher to Wagner’s son Siegfried. In 1893 he married the opera singer Henriette Standhartner, but it wasn’t a happy marriage.

From 1898 until 1900 he staged Wagner’s opera’s in Covent Garden, London. In 1904 he became the director of the Wiener Philharmoniker and in 1907 of the Hofoper.

He had an affair with opera singer Zdenka Faßbender and in 1911 he divorced Henriette, who had made huge debts behind his back. During his 100th performance of “Tristan und Isolde”, with Zdenka as Isolde, he broke down. Shortly before his death he married Zdenka in hospital. He was a founder of the Mozartfestspiele in Munich.

His first wife was buried in his grave at the Waldfriedhof in Munich, but Zdenka rests in Tutzing, Bavaria.