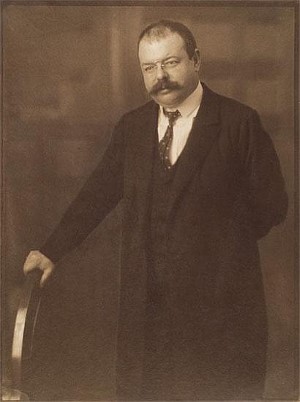 The art photography. Among his oeuvre are artist portraits, such as Gustav Klimt, Koloman Moser, and G. Mahler, all of whom are in the traditional style, but are increasingly gaining in expression from the turn of the century. S. publish.

His works from 1898 in the “Wiener Photographische Blätter”, from 1904 in the “Photographische Rundschau” as well as in various Anthol. He worked mainly. With the rubber impression, later also with the bromine oil process and the photographer, and is regarded as the most important representative of the art photographer in addition to the “Trifolium” (H. Henneberg, s. D., Heinrich Kühn and Hans Watzek). Direction in the Vienna of his time. S. was a member of numerous domestic and foreign companies. Ver., From ca. 1892 the renowned association of art photographers “Linked Ring” in London, 1897 of the Wr. Camera-Club as well as 1904 Honorary Mitgl. Of the Wr. Photo clubs, and participated in numerous editions. In Germany and abroad. In 1907 he organized according to. With Kuehn an ausst. In the Galerie Miethke.