German baritone. After study in Hamburg and Berlin he sang in Essen, Hamburg and Riga. Invited by Gustav Mahler to join the Vienna Hofoper in 1903, he was the first local Orestes (1909), Golaud (1910) and Amfortas (1914). His Mozart roles included Count Almaviva, which he sang at Salzburg in 1906. Friedrich Weidemann sang in various houses from 1896 until Mahler engaged him for Vienna in 1903, where he remained till his death.

He was the natural complement to Leopold Demuth, lacking the latter’s superb instrument but being the more committed actor. Their roles were more or less the same, with Weidemann tending more to the heavier Wagner parts and Demuth to the Verdi ones.

Apart from creating many roles like Amfortas and Golaud for Vienna, he sang the world premieres of Mahler’s Kindertotenlieder and Das Lied von der Erde in the original baritone version. He recorded for G&T and Gramophone, Odeon, and Pathé. 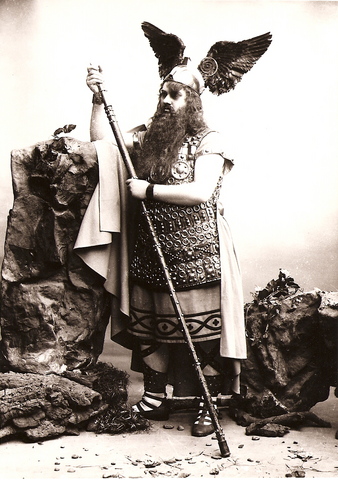 He created the role of Kaspar in Alexander von Zemlinsky’s opera Es war einmal on 22 January 1900, alongside Selma Kurz, under Gustav Mahler’s baton. He came to the Vienna Court Opera in 1903, where he worked with Karl Weigl as vocal coach.

He sang in a new production of Wagner’s Das Rheingold on 23 January 1905, under Mahler.

Six days later, on 29 January, he was the soloist in the premiere of Mahler’s Kindertotenlieder. This concert also included the premiere performance of “Der Tamboursg’sell” from Des Knaben Wunderhorn.

His other roles at the Court Opera included the title role in Mozart’s Don Giovanni (December 1905), and Wotan in Die Walküre (1907, alongside Anna von Mildenburg).