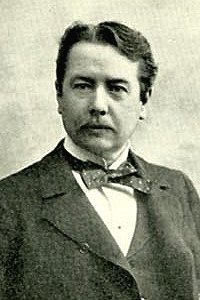 George Whitefield Chadwick was an American composer. Along with Horatio Parker, Amy Beach, Arthur Foote, and Edward MacDowell, he was a representative composer of what can be called the New England School of American composers of the late 19th century—the generation before Charles Ives. Chadwick’s works are influenced by the Realist movement in the arts, characterized by a down-to-earth depiction of people’s lives. Many consider his music to portray a distinctively American style. His works included several operas, three symphonies, five string quartets, tone poems, incidental music, songs and choral anthems. Along with a group of other composers collectively known as the Boston Six, Chadwick was one of those responsible for the first significant body of concert music by composers from the United States. The other five were Amy Beach, Arthur Foote, Edward MacDowell, John Knowles Paine, and Horatio Parker.

Chadwick studied music in his late teens at the New England Conservatory, and later with Jadassohn at the Leipzig Conservatory and Rheinberger in M­nich. Upon return to America in 1880, he taught and played the organ. He wrote a text­book in 1897, and set up an opera workshop and student orchestra, and directed the Springfield Music Festival from 1889 to 1899. He works include symphonies, concert overtures, string quartets, piano quintets, songs, and religious music. Among his operas are Tabasco (Boston, Massachusetts: 1894), Judith (Worcester: 1901), and The Padrone (1912).