Gottfried, Freiherr van Swieten (Baron van Swieten) was a diplomat, librarian, and government official who served the Austrian Empire during the 18th century. He was an enthusiastic amateur musician and is best remembered today as the patron of several great composers of the Classical era, including Joseph Haydn, Wolfgang Amadeus Mozart and Ludwig van Beethoven.

Van Swieten was of Dutch birth; he was born in Leiden and grew up there to the age of 11. His father Gerard van Swieten was a physician who achieved a high reputation for raising standards of scientific research and instruction in the field of medicine. In 1745, the elder van Swieten agreed to become personal physician to the Austrian Empress Maria Theresa, and moved with his family to Vienna, where he also became the director of the court library and served in other government posts. The young van Swieten was educated for national service in an elite Jesuit school, the Theresianum.

According to Heartz, the young van Swieten had “excelled in his studies” and was fluent in many languages. Thus it was natural that he would pursue (following a brief stint in the civil service) a career as a diplomat. His first posting was to Brussels (1755-1757), then Paris (1760-1763), Warsaw (1763-1764), and ultimately (as ambassador) to the court of Frederick the Great of Prussia in Berlin (1770-1777).

On his return to Vienna in 1777 van Swieten was appointed as the Prefect of the Imperial Library, a post which had been vacant for five years since the father’s death. Van Swieten remained imperial librarian for the rest of his life.

As librarian, van Swieten introduced the world’s first card catalog (1780). Libraries had had catalogs before, in the form of bound volumes. Van Swieten’s innovation of using cards permitted new entries to be freely added in a conveniently searchable order. Card catalogs were soon adopted elsewhere, notably in Revolutionary France.

Van Swieten also expanded the library’s collection, notably with books on science, as well as older books from the libraries of monasteries that had been dissolved under the decrees of Emperor Joseph II. 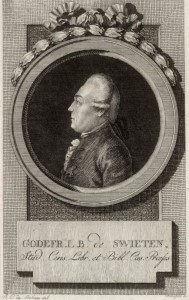 Van Swieten’s strong interest in music extended to the creation of his own compositions. While in Paris he staged a comic opera of his own composition. He also composed other operas as well as symphonies. These works are not considered of high quality and are seldom if ever performed today. The Grove Dictionary opines that “the chief characteristics of his conservative, three-movement symphonies are tautology and paucity of invention … As a composer van Swieten is insignificant.”

Swieten was well off financially, though by no means as wealthy as the great princes of the Empire. He had inherited money from his father, and he was also well paid for his government posts. Braunbehrens estimates his income as about “ten times Mozart’s”, which would make it (very roughly) 20,000 florins per year.

Van Swieten never married. Unlike his father, who remained a Protestant after coming to Austria, Gottfried converted to Roman Catholicism, the state religion of the empire. Like many other prominent male Viennese (for example, as of 1784, Mozart), van Swieten was a Freemason. Van Swieten owned a Vermeer, the famous “Art of Painting”, which he inherited from his father. At the time it was not known that the painting was by Vermeer. 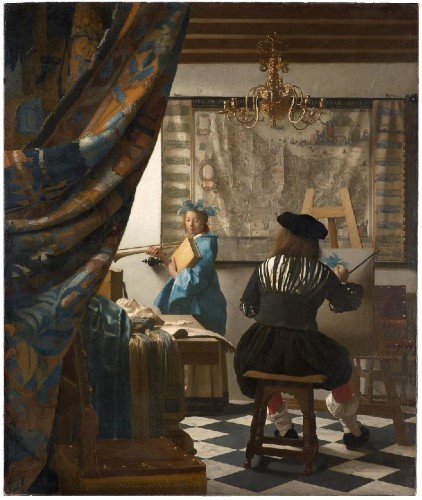 The evidence suggests that Van Swieten’s relationship with the great composers of his day was primarily one of patronage. This means that the composers did not work for van Swieten on salary or commission, but received payments from him from time to time in the manner of a tip. Thus, Joseph Haydn remarked to his biographer Griesinger that “”He patronized me occasionally with several ducats.” This was a common way of paying musicians in the age of aristocracy; Haydn had received similar payments from his employer Nikolaus Esterházy, though he also drew a salary. The patronage system also financed the early travels of the Mozart family.

The relationship between patron and artist was not one of social equals. An 1801 letter of Haydn to van Swieten, by then his longtime collaborator, used no second person pronouns, instead addressing the Baron as “Your Excellency”; presumably this reflected their everyday practice.

In 1776, during a visit home to Vienna from his posting in Berlin, van Swieten offered encouragement to the 43-year-old Joseph Haydn, who at the time was vexed by the hostile reception his work was receiving from certain Berlin critics. Van Swieten told him that his works were nevertheless in high demand in Berlin. Haydn mentioned this appreciatively in his 1776 autobiographical sketch.

In 1790, with the death of Nikolaus Esterházy, Haydn became semi-independent of his long-time employers the Esterházy family. He moved to Vienna and thus became more free to accept van Swieten’s patronage. Olleson suggests that Haydn participated in the Handel concerts of the Gesellschaft der Associierten, and notes that already in 1793, van Swieten was trying to get him to write an oratorio (to a text by Johann Baptist von Alxinger. In 1794, when Haydn set off for London on his second journey there, he rode in a carriage provided to him by van Swieten.

On his return the following year, Haydn and van Swieten developed a close working relationship, with van Swieten serving as his librettist and artistic adviser. The collaboration began in 1795/1796 with the small oratorio version of The Seven Last Words of Christ. This work was composed by Haydn as an orchestral piece in 1785. In the course of his second London journey, in Passau, he had heard a revised version amplified to include a chorus, prepared by the Passau Kapellmeister Joseph Friebert. Liking the idea, Haydn then prepared his own choral version, with van Swieten revising the lyrics used by Friebert.

Haydn and van Swieten then moved on to larger projects: the full-scale oratorios The Creation (1798) and The Seasons (1801). Van Swieten translated (from English to German) and adapted the source material, which came from an anonymous English libretto and James Thomson’s poem The Seasons, respectively. He also translated in the reverse direction, putting the German back into English in a way that would fit the rhythm of Haydn’s music. This reverse translation, though often awkward, enabled the first published editions of these oratorios to serve both German- and English-speaking audiences.

In the margins of his libretti, Van Swieten made many specific artistic suggestions to Haydn about how various passages should be musically set, suggestions which in general Haydn “observed closely” (Olleson).

Haydn’s musical setting stems from a suggestion of van Swieten’s that the words should be sung by the bass soloist over an unadorned bass line. However, he only partly followed this suggestion, and after pondering, added to his bass line a rich layer of four-part harmony for divided cellos and violas, crucial to the final result.

The premieres of the three oratorios The Seven Last Words, The Creation and The Seasons all took place under the auspices of the Gesellschaft der Associierten, who also provided financial guarantees needed for Haydn to undertake long-term projects.

Van Swieten first met Wolfgang Amadeus Mozart in 1768, when he was 35 years old and Mozart a boy of 11. The Mozart family was visiting Vienna, hoping to achieve further fame and income following the earlier completion of their Grand Tour of Europe. According to Mozart’s father Leopold, Van Swieten was involved in the early planning of Wolfgang’s ill-fated opera La Finta Semplice (the opera was later blocked by intrigues, and could be performed only in Salzburg).

In 1781, shortly after Mozart had moved to Vienna, van Swieten met him again: at the salon of Countess Thun, Mozart played extracts from his recent opera Idomeneo, with van Swieten and other important officials in the audience; this event helped instigate Mozart’s commission for the opera The Abduction from the Seraglio, his first great success as a composer.

When Mozart died (1:00 am December 5, 1791), van Swieten showed up at his home and made the funeral arrangements. He may have temporarily helped support the surviving Mozarts, as Constanze’s correspondence in several places mentions his “generosity”. On 2 January 1793, he sponsored a performance of Mozart’s Requiem as a benefit concert for Constanze; it yielded a profit of 300 ducats, a substantial sum. He was also reported to have helped arrange for the education of Mozart’s son Karl in Prague.

Van Swieten was a patron and supporter of Ludwig van Beethoven during his early years in Vienna. Beethoven’s experience with van Swieten was in some ways parallel to Mozart’s about 12 years earlier. He visited the Baron in his home, where there were still regular gatherings centered around the music of Bach and Handel.

Earlier in his career, while in Berlin, van Swieten had also supported the career of Carl Philipp Emanuel Bach. Bach wrote the six Symphonies for String Orchestra (1773) on commission from van Swieten; according to Goodwin and Clark, the commission specified that “the composer’s creative imagination might have free rein, unfettered by any regard for technical difficulties”. The third set of Bach’s Sonaten für Kenner und Liebhaber (1781) is dedicated to Gottfried van Swieten (1733-1803).