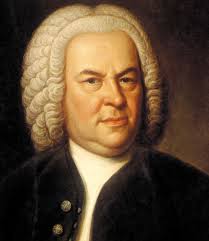 Johann Sebastian Bach was a German composer and musician of the Baroque period. He enriched established German styles through his skill in counterpoint, harmonic and motivic organisation, and the adaptation of rhythms, forms, and textures from abroad, particularly from Italy and France. Bach’s compositions include the Brandenburg Concertos, the Goldberg Variations, the Mass in B minor, two Passions, and over 300 sacred cantatas of which 190 survive. His music is revered for its technical command, artistic beauty, and intellectual depth.

Bach was born in Eisenach, Saxe-Eisenach, into a great musical family. His father, Johann Ambrosius Bach, was the director of the town musicians, and all of his uncles were professional musicians. His father probably taught him to play the violin and harpsichord, and his brother, Johann Christoph Bach, taught him the clavichord and exposed him to much contemporary music. Apparently at his own initiative, Bach attended St. Michael’s School in Lüneburg for two years. After graduating he held several musical posts across Germany: he served as Kapellmeister (director of music) to Leopold, Prince of Anhalt-Köthen, Cantor of the Thomasschule in Leipzig, and Royal Court Composer to Augustus III. Bach’s health and vision declined in 1749.

In 1749; on 2 June, Heinrich von Brühl wrote to one of the Leipzig burgomasters to request that his music director, Johann Gottlob Harrer, fill the Thomaskantor and Director musices posts “upon the eventual … decease of Mr. Bach”. Bach became increasingly blind, so the British eye surgeon John Taylor operated on Bach while visiting Leipzig in March or April 1750.

On 28 July 1750 Bach died at the age of 65. A contemporary newspaper reported “the unhappy consequences of the very unsuccessful eye operation” as the cause of death. Modern historians speculate that the cause of death was a stroke complicated by pneumonia. His son Carl Philipp Emanuel and his pupil Johann Friedrich Agricola wrote an obituary of Bach. In 1754, it was published by Lorenz Christoph Mizler in the musical periodical Musikalische Bibliothek. This obituary arguably remains “the richest and most trustworthy” early source document about Bach.

Bach’s estate included five harpsichords, two lute-harpsichords, three violins, three violas, two cellos, a viola da gamba, a lute and a spinet, and 52 “sacred books”, including books by Martin Luther and Josephus. He was originally buried at Old St. John’s Cemetery in Leipzig. His grave went unmarked for nearly 150 years. In 1894, his remains were located and moved to a vault in St. John’s Church. This building was destroyed by Allied bombing during World War II, so in 1950 Bach’s remains were taken to their present grave in St. Thomas Church. Later research has called into question whether the remains in the grave are actually those of Bach.

Bach’s abilities as an organist were respected throughout Europe during his lifetime, although he was not widely recognised as a great composer until a revival of interest and performances of his music in the first half of the 19th century.

The study is devoted to Johann Sebastian Bach and his musicians in Leipzig’s two main churches, and to the question to which extent current opinions in musicology regarding historically-informed practice are actually correct. The core of Bach’s first Sunday choir in Leipzig consisted of the eight best singers of the Thomasschule. Soprano and alto parts of the cantatas and passions were sung by schoolboys (elder boys using falsetto), but bass and tenor parts mostly by students and private pupils.

Instrumentalists were city musicians and their Gesellen, university students and school pupils. Only the violin, viola, cello parts and sometimes the bassoon, traverso and recorder parts were played by multiple musicians. Town musicians apparently had their own part in general. But in the Basso continuo group, even three musicians (mostly pupils) sometimes performed using only one part together. There are no indications that Bach had ripienists sing along from the parts of concertists; Bach did not have sufficient good musicians to regularly use vocal ripienists.

The interior of both churches nowadays differs from Bach’s time; they had similar shapes, interiors and acoustics, with a shorter reverberation time. Bach conducted from the harpsichord in the Schülerchor, with the other continuo instruments around him. The singers were standing at music stands at the balustrade. The other instrumentalist were standing in high standing side galleries in the Thomaskirche, and in a vaulted recess in the Nikolaikirche, in which church more singers than eight during the performance of the Music was practically impossible.

The large harpsichords in both churches were usually played by Bach himself from the scores, and in later years by a student. The figured bass was probably nearly always realized by organ and harpsichord at the same time in all movements of the cantatas and passions. In the organ accompaniment, a Gedackt 8′ would do in small performances; when larger forces were involved, an extra Principal 8′ was added.

The bass part itself was often played with at least an 8′- and a 16′-stop. The large violones used by Bach in Leipzig still remain. Originally they were in all probability G-violones, played at 8′-pitch. Their sound must have been more ample in the lower regions than that of the cello. Nearly always, Bach had two cellos play along in all movements, and, if possible, a violone and a bassoon as well.

Usually, Bach had these players perform along all movements, including recitatives and arias that were to be performed piano, so the bassoon never sounded without cello and violone. Bach seldom wrote viol parts in his church music. If the viol player joined the continuo, it was only when the instrument had been assigned an obligato part anyway. In Leipzig, Bach rarely used the lute, which had eleven to fourteen courses. There are no indications that Bach ever used a calichon or a theorbe in his Leipzig church music.