Heinrich Berte, born Heinrich Bettelheim was an Austria-Hungarian composer of operas and operettas. Heinrich Berté, at the beginning of his career, was a relatively unsuccessful composer of ballets and an opera. In 1911 he was offered a libretto by the writer Alfred Maria Willner for an opera about Franz Schubert, based on the novel, Schwammerl by Rudolf Hans Bartsch, but this was turned down and he was told to use Schubert’s music in a pastiche instead.

On 15 January 1916 his first performed work, an arrangement of Franz Schubert’s Das Dreimäderlhaus was premiered in the Raimund Theater in Vienna, Gretl Schörg’s voice was discovered during the run. The operetta was translated into 22 languages and in 1921 it opened as Blossom Time in New York, in 1922 as Lilac Time in London), and was performed in over 60 countries, it was a worldwide success. The operetta was filmed several times . Berté could not build on this success, his second Schubert operetta was unsuccessful. 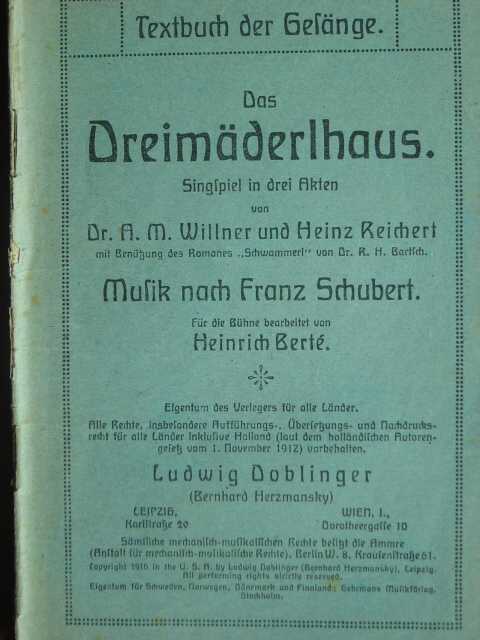