Behn married Luise Stromberger in 1883. In June 1884 their son Siegfried was born. After passing his exam in 1885, he gave up law and turned to music. First he went with his family to Munich, where daughter Eva was born in 1887, and Behn became a private student of Joseph Rheinberger, then of Anton Bruckner (1824-1896) in Vienna and from 1887 of Hermann Zumpe in Hamburg, where his second son Walther was born. In the second marriage, Behn was married to Speranza Francesca Eugenia Caneva.

Hermann Behn was a conductor and pianist, who also published a number of virtuoso piano scores from Wagner operas and other works from the well-known symphonic repertoire that are still widely used today, including an arrangement of Gustav Mahler’s Symphony No. 2.

In Hamburg he published 9 volumes of songs and songs and a piano sonata in C minor and edited parts of Wagner’s music dramas for 2 pianoforte for 4 hands, as well as Bruckner’s 7th and Mahler’s Symphony No. 2, 3 preludes of Schillings and 12 classical overtures (3 Mozarts, 6 Beethovens, 3 Webers).

Behn gave public lectures on the history of music in Hamburg on behalf of the secondary school authorities since 1897 and was awarded the professorship by the Hamburg Senate in 1917. 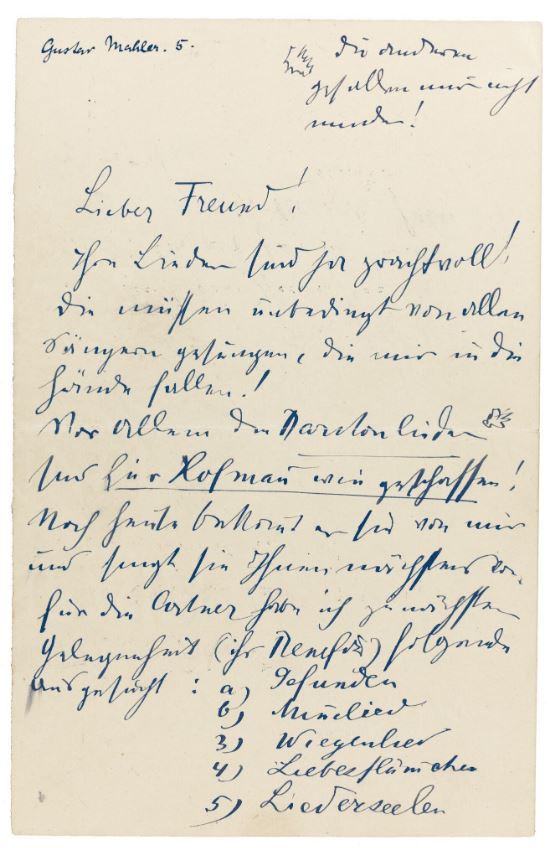 Mahler gives a characteristically direct appraisal of the composer’s songs, discarding some, selecting the five which please him and which he is happy to recommend to the singer Hofmann, offers to be the accompanist if they are performed in the Hamburg area and makes the suggestion that some might be orchestrated

‘Hofmann’ is Baptist Hofmann (1864-1937), baritone, engaged at the Hamburg Stadttheater from 1894-1897, and subsequently at the Konigliches Opernhaus in Berlin.

The first three songs listed here were published in 1896 as Behn’s Op.1 nos. 1-3; the remaining two appeared in Opp. 4 and 5 respectively. 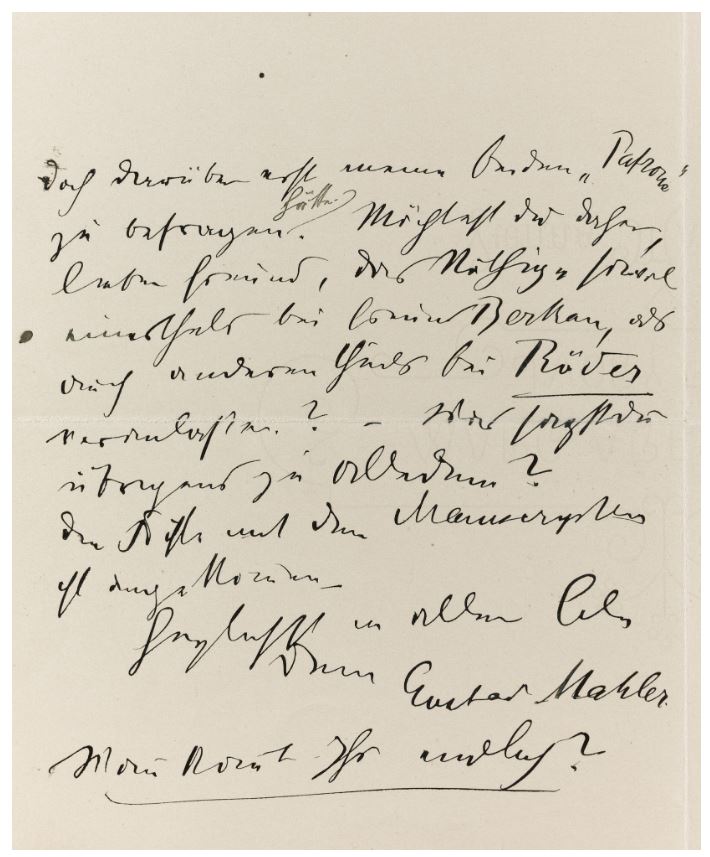 Probably to “his patron” Hermann Behn in Hamburg, informing him that his Symphony No. 3 will be published by a local firm [Weinberger], who is also printing all the orchestral parts, and asking Behn if he can assist him retrieve the printing plates of Symphony No. 2 from the engravers Röder; he has already asked his publisher to arrange this, but feels he ought to turn to his two patrons (“Berkan”) to help, and asking Behn when he will finally visit him in Vienna (“…wie verhält es sich mit den Platten der C moll-Partitur? Ich war so keck, dieselben als meine Eigenthum zu bezeichnen…”), 2 pages, 8vo (c.17 x 13cms), integral blank, typed translation into English, Vienna, 13 January 1898. Weinberger music publishers.