Jacques Offenbach was a German-born French composer, cellist and impresario of the romantic period. He is remembered for his nearly 100 operettas of the 1850s-1870s and his uncompleted opera The Tales of Hoffmann (Les contes d’Hoffmann, 1881). He was a powerful influence on later composers of the operetta genre, particularly Johann Strauss, Jr. and Arthur Sullivan. His best-known works were continually revived during the 20th century, and many of his operettas continue to be staged in the 21st. The Tales of Hoffman remains part of the standard opera repertory.

Born in Cologne, the son of a synagogue cantor, Offenbach showed early musical talent. At the age of 14, he was accepted as a student at the Paris Conservatoire but found academic study unfulfilling and left after a year. From 1835 to 1855 he earned his living as a cellist, achieving international fame, and as a conductor. His ambition, however, was to compose comic pieces for the musical theatre. Finding the management of Paris’s Opéra-Comique company uninterested in staging his works, in 1855 he leased a small theatre in the Champs-Élysées. There he presented a series of his own small-scale pieces, many of which became popular.

In 1858, Offenbach produced his first full-length operetta, Orphée aux enfers (“Orpheus in the Underworld”), which was exceptionally well received and has remained one of his most played works. During the 1860s, he produced at least 18 full-length operettas, as well as more one-act pieces. His works from this period included La belle Hélène (1864), La vie parisienne (1866), La Grande-Duchesse de Gérolstein (1867) and La Périchole (1868). The risqué humour (often about sexual intrigue) and mostly gentle satiric barbs in these pieces, together with Offenbach’s facility for melody, made them internationally known, and translated versions were successful in Vienna, London and elsewhere in Europe.

Offenbach became associated with the Second French Empire of Napoleon III; the emperor and his court were genially satirised in many of Offenbach’s operettas. Napoleon III personally granted him French citizenship and the Légion d’Honneur. With the outbreak of the Franco-Prussian War in 1870, Offenbach found himself out of favour in Paris because of his imperial connections and his German birth. He remained successful in Vienna and London, however. He re-established himself in Paris during the 1870s, with revivals of some of his earlier favourites and a series of new works, and undertook a popular U.S. tour. In his last years he strove to finish The Tales of Hoffmann, but died before the premiere of the opera, which has entered the standard repertory in versions completed or edited by other musicians. 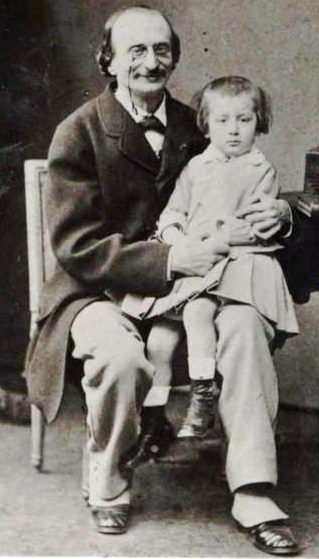