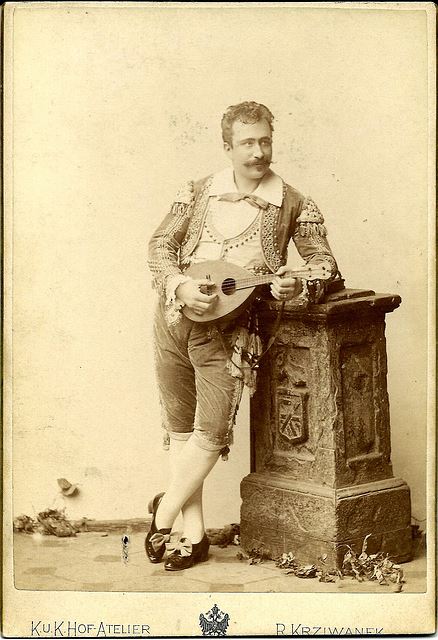 Son of an innkeeper. He was 1869-1872 chapel boy in the archbishop’s chapel in Salzburg. Later a boy singer in St. Peter and at the Franciscan Church, where he was trained by Peter Singer in several musical instruments. He attended secondary school and the Mozarteum. 1877-1878 student of Shimon (vocals) and Brulliot (dramatic lessons) at the Konigliches Music school in Munich and made his debut. In 1879 worked at the Strasbourg City Theater as an actor, but was also used in smaller opera roles. After a sensational arrest and charge of desertion, from which he was fully rehabilitated, he went to the Frankfurt City Theater for a short time as an actor and singer in 1880.

His actual career as an opera singer, began in 1881 at the Hamburg City Theater, where he made his debut as a speaker in Mozart’s ‘Magic Flute’. In 1889 and 1890 he gave guest appearances (including as Hamlet and Telramund) at the Vienna State Opera and in 1891 at the Theater Royal Drury Lane in London. In the same year he was transferred to the Vienna State Opera, where he, until his illness-related retirement in 1906, was recognized in almost 1.000 appearances by his beautiful baritone voice and his strong playing talent, especially in Mascagni’s ‘Die Rantzau’ and as a Mozart singer.