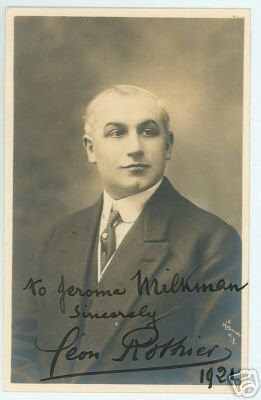 Léon Rothier was a French operatic bass who enjoyed a long association with New York’s Metropolitan Opera. Rothier was born in 1874 in Reims, in the Champagne-Ardenne région of northern France. In this city he began his career as a violinist, but afterwards traveled to the Conservatoire de Paris to study voice.

In 1899, he made his singing debut at the Opéra-Comique in Paris, in Charles Gounod’s Philémon et Baucis. One year later, he participated in the premiere of Gustave Charpentier’s Louise. Rothier left the Opéra-Comique in 1907, and after some short stints with a few smaller French opera companies, moved to the United States, beginning a 30-year association with the Metropolitan Opera in New York City. He created the role of Grandfather Tyl in L’oiseau bleu by Albert Wolff (1919). He was still fulfilling public singing engagements in New York City as late as 1949, at the Town Hall performance space.

In the sequence of important French-born basses to be heard at the Met, he followed in the footsteps of Pol Plançon and Marcel Journet. Rothier made several sound recordings during his lifetime, including two excerpts from Un ballo in maschera with the great tenor Enrico Caruso. Rothier also appeared in one or two motion pictures, Webb Singing Pictures (1917), and possibly one made by Lee de Forest in his Phonofilm sound-on-film process around 1922.

He began his career as a violinist, then studied singing at the Paris Conservatoire under Paul Lhérie. He made his debut in 1899 at the Paris Opéra-Comique as Jupiter in ‘’Philémon et Baucis’’ by Gounod. He remained active till 1907 at the Opéra-Comique, where he appeared on 2. 2. 1900 in the premiere of G. Charpentier’s ‘’Louise’’ and on 11. 4. 1900 in ‘’Le Juif Polonais’’ of Camille Erlanger. Since 1907 he worked not only at the opera houses of Marseille and Nice, but also in other French provincial theatres and at the Opera House in Monte Carlo.

He was still fulfilling public singing engagements in New York City as late as 1949, at the Town Hall performance space. During the first marriage he was married with the soprano Mariette Mazarin (1877-1952) from whom he separated. His second marriage with contralto Maria Duchêne (*1884 – ?). At the age of 76 he entered the third marriage, however, died shortly after.